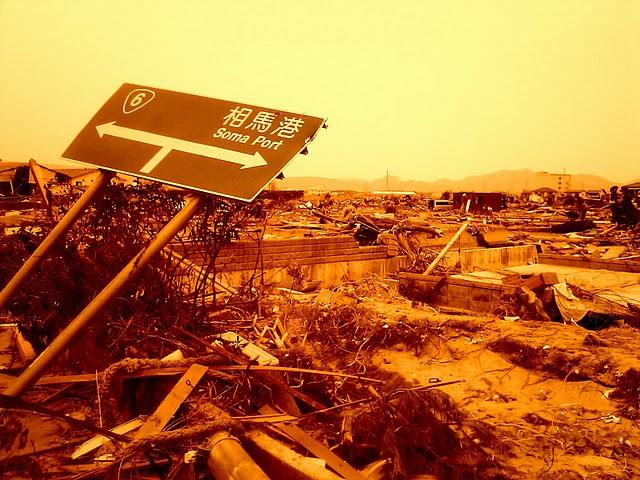 Japan is still digging its way out of the earthquake and tsunami that hit in March. Here's a way to help.
By Katie Thomas | June 15, 2011 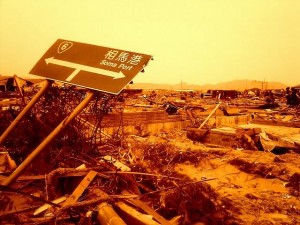 I’ve seen destruction before, tragedy too, but within the confines of a museum or memorial: clean, organized, and touching, but safe. The day before I arrived in Fukushima I wandered through the Hiroshima Atomic Bomb Museum and looked at pictures of a city laid to waste in seconds. There were survivors’ drawings of victims, their skin melting away from their bones, faces twisted in agony. I was deeply moved, but I left for my next activity just like all the other tourists who filtered through the museum.

Arriving in Soma was different. Situated on the east coast of Honshu 30 kilometers to the south of Sendai and 50 kilometers north of the Daiichi nuclear facility, Soma received the full brunt of the March 11 Tohoku earthquake and tsunami. The tragedy there is ongoing; it is messy, and it is chaotic. The coast bears a ghostly resemblance to the pictures at the museum. Small streets crowded with homes, shops, and schools are simply gone. Digging through the sand I find photos, toys, and furniture, things that were cherished. They are now lumped into two piles: combustible, non-combustible. Tatami mats dotting the newly flat landscape mark where bodies were found once the water receded.

At the community center, however, I am greeted by children with sunny faces. Parents and family members rest inside, drinking tea and gratefully sorting through much-needed supplies. Tsukasa Takahashi, whose family operates the Haragama Yochien kindergarten where he is a teacher, welcomes me. He is standing on the landing next to the woman he married just that morning amid all the wreckage at Soma beach.

Several foreign English teachers, on the way home from surveying the damage in Soma, created Hearts for Haragama to provide assistance for Tsukasa, the students of Haragama Yochien, and their families. The organization has helped Tsukasa provide an escape for his students from the devastation that surrounds them. They’ve given these kids a chance to be kids, even if it’s just for a short while, before they return with their families to try and pick up the pieces of their lives.

After saying our goodbyes to the children, my companions and I piled into our cars and followed Tsukasa to the beach. Once we reached what was left of the coast, we put on gloves and went to work. All around us were piles of debris that Tsukasa had collected from earlier forays into this wilderness of twisted metal and wood.

We stayed on the beach gathering debris until we noticed some menacing clouds moving toward us. With the rain, our work came to an end. It was disheartening to know that I would be unable to help further. But I was immediately buoyed by the people sitting around me. Today was just another day for them. They would be back on this beach again and again, until it no longer bore the scars from that terrible day. They would ensure that the children of Haragama Yochien, despite all they have suffered and lost, could look toward a more hopeful future.

For more information on the efforts of Hearts for Haragama please visit their website.

Katie ThomasKatie Thomas is a contributor to Foreign Policy In Focus. She visited Soma in May.