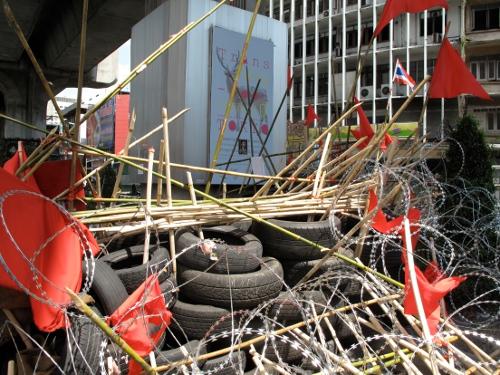 The Thai government is cracking down on protesters, but don't expect much criticism from Washington.
By Andre Vltchek | May 21, 2010 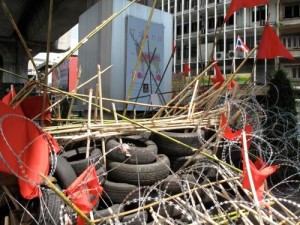 On May 19, the Thai military used bullets, water cannons, and tear gas when it stormed the makeshift barricades manned by the “Red Shirts.” Since protests began in mid-March, over 70 people have been killed, the great majority of them civilians. The Red Shirts are demanding social justice, an end to the rule of notorious Thai elite, and new elections. They are saying that Prime Minister Abhisit Vejjajiva lacks a proper mandate after coming to power with military support in a controversial parliamentary vote in 2006. The UK-born and Oxford-educated prime minister is often accused of being an unapologetic supporter of the Thai throne and the elites. Just a few days before the deadly crackdown, Abhisit withdrew an offer of fresh elections.

The prime minister is at the “wrong place, the wrong time, and on the wrong side of the history,” says Thitinan Pongsudhirak, director of the Institute of Security and International Studies. He thinks of himself as “not just a prime minister — he is a savior of the throne.”

For several months, official state sources bombarded Thai and international media outlets with the propaganda that terrorists and bandits were hiding among the Red Shirts. The entire protest movement, government sources insisted, has been bankrolled by Thaksin Shinawatra, the former prime minister overthrown in a 2006 military coup. This year, the current regime accused Thaksin of corruption and stripped him in absentia of almost all his assets.

But the Red Shirts clearly outgrew their attachment to Thaksin Shinawatra. They were openly giving voice to grievances that the Thai state, still in many respects feudal, has open contempt for the poor who are still the majority of this nation. “The protest movement defiantly encamped in Bangkok has its roots as a reaction to Mr. Thaksin’s ouster,” according to The New York Times, “but it has since expanded to resemble a large social movement by less-affluent segments of Thai society rebelling against what they say is elite that meddles to control Thailand’s democratic institutions.”

Since the Vietnam War, Thailand has been the most trusted Southeast Asian ally of the United States. The U.S. government and Western mass media rarely criticize the Thai power structure, despite a brutal history that includes 18 coups and several bloody crackdowns against pro-democracy demonstrators.

The current military crackdown will not likely end the protests. As armed vehicles were destroying the makeshift Red Shirt barricades, protesters burned the Thai stock exchange, several banks, and the second-largest mall in Southeast Asia. They also attacked pro-establishment media outlets, including Channel 3 TV and the newspapers The Nation and Bangkok Post. Riots erupted all over the country, including Chiang Mai, the northern capital and the stronghold of the Red Shirts.

Thailand is already battered by a low-intensity civil war, unrelated to the Red Shirt protests, in the predominantly Muslim south. The country now faces the unattractive prospect of a long and arduous decline. More rebellions, military coups, state brutality and clampdowns on freedom of expression are on the horizon. But it’s not likely that the United States and its western allies will demand reforms of the Thai system, which proved to be so supportive and useful to them for decades.