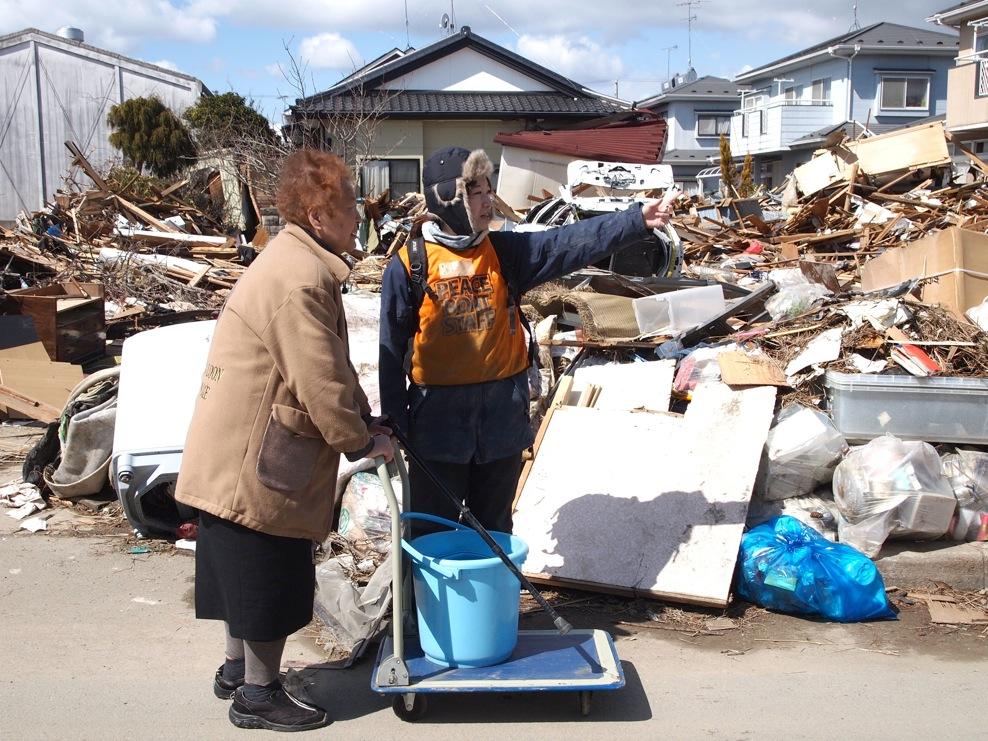 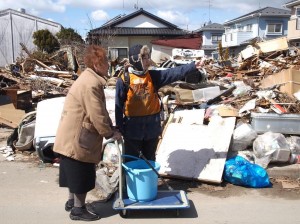 In the early 1980s, when the Japanese government censored accounts of its nation’s wartime atrocities from school textbooks, a group of Japanese university students chartered a ship to travel around Asia and talk firsthand to the victims of their nation’s military aggression. This initial trip developed into the NGO Peace Boat – which has since organized scores of global voyages for people interested in learning more about human rights and environmental issues. In addition to these cruises, its volunteers have also played a central role in coordinating disaster relief operations – including those in Kobe in Japan, Izmit in Turkey, and New Orleans in the United States.

Within a week of the massive March 11 earthquake off the coast of Tohoku, Peace Boat’s advanced relief squad had navigated the region’s broken roads and set up base in the devastated city of Ishinomaki in Miyagi prefecture. From here they’ve been coordinating rotating teams of between 50 and 100 Japanese and international volunteers to assist the local community – primarily by cooking hot meals, distributing supplies, and clearing the tons of mud swept in by the 10-foot tsunami.

With its volunteers divided into 5-member cells and twice-daily briefings, Peace Boat’s operation appears to mirror the better-publicized missions of the U.S. military and Japanese Self Defense Force (SDF). However, what distinguishes Peace Boat from these groups is its compassionate response to the needs of the traumatized communities. According to one of the NGO’s coordinators, Arata Otake, “We try our best to reflect the voices of those affected.”

On March 30, for example, volunteers spent the entire day shoveling sludge from an elementary school in order to surprise students with a belated graduation ceremony. Peace Boat regularly canvasses survivors about what supplies they need the most – recently diapers, nail-clippers, and sanitary towels topped the list. Moreover, as far as possible given the appalling circumstances, volunteers prepare the food that people request.

Following one team of volunteers as they pick their way through what was once the city’s entertainment district, I witness the lightning speed with which Peace Boat establishes a meal distribution station. Barely half an hour after arriving in the area, they are serving dozens of survivors with bowls of hot stew – prepared by a well-known Tokyo chef who volunteered in the days after the earthquake struck.

As an aftershock skids the tiles from a nearby roof, the residents tuck into the meal around an outdoor fire. Fifteen yards away – but emotionally much further – an SDF squad mans a water supply truck. Professional to a fault, they limit their interactions with the survivors to stock greetings and snapped salutes.

Tohoku people are themselves renowned for their uncommunicative manner. But when the Peace Boat volunteers ask them about their current requirements, the survivors slowly open up. At first, they talk about their need for spades and wheelbarrows to clear their homes. Then they voice fears that their already aging community will, in the months to come, become abandoned forever. Finally, these weatherworn fishermen begin to pour out accounts of their narrow escapes, the friends they’ve lost and their guilt at surviving when so many didn’t. Putting down their notepads and pens, the volunteers sit and listen, occasionally offering a hug or a handful of tissues.

Among the massive relief operations currently underway in Tohoku, it’s easy to forget the anguish that each and every survivor has experienced. These volunteers, though, seem to understand that sometimes a sympathetic ear can be just as nourishing as a good, hot meal.

Further information on NGO Peace Boat’s relief operation in Tohoku can be found at http://www.peaceboat.org