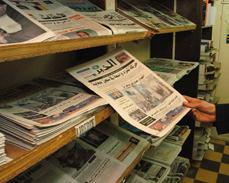 Powder in the Eyes in Algeria

In response to popular pressures, the Algerian regime is making gestures toward reform. But the real problem is the regime itself.
By Wided Khadraoui | October 24, 2011

The endgame unfolding in Libya is having profound effects throughout North Africa and the Middle East. The revolution still rages on as Gaddafi’s relatives pour into Algeria, where the implications of the last battle in Sirte have profoundly impacted the political situation. Algeria and Morocco are the only states in North Africa where the leadership remains intact. Algeria has certainly felt the pressure of the revolutionary wave and has taken several measures to counter any challenge that might emerge from its conflict-weary nationals.

There are three main factors preventing Algeria from joining the Arab Spring. The first is a lack of support from the intellectual and academic elites of the nation, making protests like the ones called for this past September 17 irrelevant. This lack of support is tied to the second reason, which is the lack of an authentic substitute for the current government. Opposition parties in Algeria have all failed to present better political prospects. Finally, Algeria is essentially a diffuse “mafia state” with widespread corruption, bribery, and protection rackets. Algeria does not have one leader that can be targeted for removal, but rather an entire establishment that needs complete restructuring. The military junta that runs Algeria maintains its support by exploiting security threats in the region and offering token reforms in an attempt to quell protests.

The most recent of these reforms is the opening up of the country’s media. Algeria has 45 independent French and Arabic publications alongside four government-owned newspapers. There are currently five television channels in Algeria, all publicly owned and used solely for the regime’s propaganda. But on September 12, the government announced that it would relinquish its monopoly on the airwaves, which it has enjoyed since 1962.

Communication Minister Nacer Mehal, in an interview with the newspaper L’Expression on September 21, promised that such reforms were sincere, although it would take some time to implement them. However, the minister also warned would-be broadcasters of “excesses that might undermine [Algeria’s] unity and sovereignty.” A careful reading of the draft bill shows that additional limitations have been inserted under the guise of protecting national media. Despite somewhat liberalizing the audio-visual sector, the bill also proposes numerous restrictions on the freedom of association, once again under the guise of national safety.

The government’s timeworn refrain that restrictions and control are necessiary to protect Algerian nationals from instability and insecurity no longer holds water. It only reinforces societywide symptoms of post-traumatic stress disorder resulting from the recent civil war, and severely limits socio-economic progress.

Censorship in Algeria has always been somewhat indirect. Insults to the president, an MP, a judge, or the army are usually prosecuted under defamation laws. It is not necessarily treated as sedition, but unfavorable media coverage can still result in prison terms or fines.

Journalists such as Mohammad Benchicou, for example, director of the newspaper Le Matin and author of a critical biography, Bouteflika: An Algerian Impostor, was sentenced to two years in prison in 2004 after the release of his book. Omar Belhouchet of the opposition El Watan has been under constant judicial attack since 2008, when he accused a supposed faith healer with close ties to the government of being a fraud. Despite the harassment, Algerian newspapers have survived constant government attempts to scrutinize and control.

Still, although Algerian journalists have generally had somewhat greater liberty to express their opinions compared to others in the region, many journalists essentially practice a form of self-censorship, avoiding certain sensitive topics altogether.

Powder in the Eyes

Meager “political reforms” to assuage public frustration have been slowly trickling out of Bouteflika’s cabinet since February. Mehal promised that consultations to open the audio-visual sector would be initiated as early as this October. The minister has repeatedly declared that the latest draft reforms are not simply “de la poudre aux yeux,” an expression that literally means “powder in the eyes,” referring to appearances that are appealing but misleading.

Ending the government’s monopoly on broadcasting has been a long-standing demand of the opposition. The authenticity of the proposed reforms, however, is another story, especially considering the regime’s history of dealing in “powder.” Democratic reforms offered by an oligarchy, after all, are an oxymoron. Accordingly, the statement released on September 12 by the Algérie Presse Service (the state-run news agency) contained an ominous caveat: the liberalization of media outlets would be dependent on broadcasters’ willingness to show “respect for the Constitution and legislation [currently] in force.”

The shortcomings of these proposals are not lost on either the press or the opposition. An op-ed from El Watan stated it most concisely: “there is nothing new, or virtually nothing [in the draft bills]. … The President of the Republic and his ministers have failed to revolutionise Algerian legislation on political practice, the way that associations work, or media conduct.”

The requirement that broadcasters show “respect for the Constitution” begs the question: which constitution will new players in the sector have to “respect” — the current one, or the one to be amended at the end of this month? Any revisions to current laws promised by the government have to be discussed and adopted by Parliament. To make the matter more complicated, the criteria for what allows particular laws to be passed and others dismissed are not clear, and the order in which reforms will be made is just as ambiguous.

In order for any reform to be feasible, the current constitution cannot continue to serve the purposes of the president and his cache of generals alone. It must clearly delineate powers, processes, and limitations, and just as importantly, it must be respected. Algeria cannot continue to put the cart in front of the horse; no reform proposed by the current regime can be viable without first eradicating the country’s political cronyism.

Algeria and the Arab Spring

Although the Arab Spring has not yet come to Algeria in full force, the country remains ripe for social unrest. Not only is poverty is widespread and unemployment high (especially among youth), but pervasive government corruption and deficient public services are persistent sources of significant popular dissatisfaction. And despite the “repeal” of the 1992 emergency laws in response to the major protests of January 2011, where two people were killed in clashes with security forces, the Algerian regime has continued to find ways to maintain the same level of control.

In an interview with Maison des journalistes, when asked about the reason for high levels of censorship in Algeria, exiled Algerian journalist Djamledine Benchenouf eloquently answered that “the leaders, who have their hands on the riches of the country…cannot afford to allow the emergence of a democratic system.” This inability to embrace the foundations of a democratic system makes it impossible for viable change to emerge under the current regime.

This is no less true elsewhere in the region. From Bahrain to Syria, Jordan to Saudi Arabia, authoritarian regimes across the Middle East resist any tangible change.

The push for democratic reform will not cease now that the initial passion of the Arab Spring is over. The seasonal nomenclature unrealistically restricted the movement to a specific time; in reality it is a continuous process. The Algerian government treats democratic reform as some kind of impossible brainteaser, when in reality all it requires is a basic overhaul of the current regime and the introduction of new and able-bodied players. Whether the current archaic leaders recognize it or not, “Out with the old, in with the new” is the only solution.

Wided KhadraouiWided Khadraoui graduated from the London School of Economics with an MSc in conflict studies. She is a contributor to Foreign Policy In Focus and writes on issues on the Middle East and North Africa, especially the Maghreb, at www.livefromthecasbah.com.