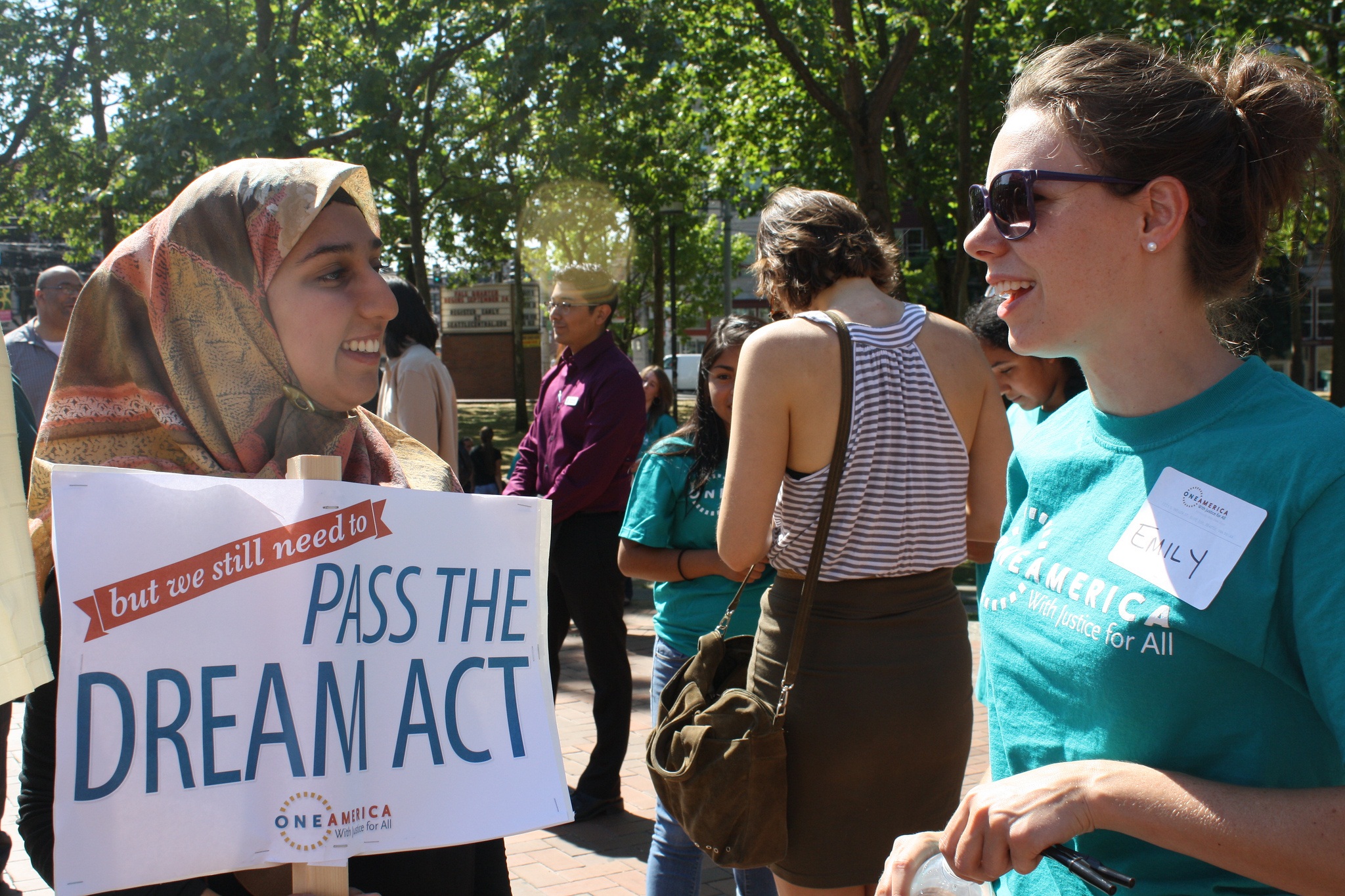 In the two years since President Obama issued his executive order extending protections to undocumented young people, over half a million have been able to normalize their lives and plan for their futures. But the protections are tenuous, and millions more enjoy no protection at all. (Photo: OneAmerica / Flickr)

A Promising but Precarious New Normal for the Young and Undocumented

A two-year-old executive order has helped thousands of undocumented young people plan for their future, but their plans could be erased with the stroke of a pen.
By Diana Anahi Torres-Valverde | July 29, 2014

Miguel Tapia was 13 when he found out what it means to be an undocumented American.

His parents explained that even though he had lived in Delaware since he was 2, he could not get a drivers license, apply for federal financial aid, or work legally in the United States.

Tapia found the news difficult to handle. The Mexican-born youth considered himself American, spoke accentless English, and saw his Delaware community as home.

He had worked diligently throughout middle school, maintaining a 4.0 GPA, because he wanted to prepare for college and a career in education policy. “Mom,” the teen recalls asking his mother, feeling defeated, “Why am I working so hard? Why am I a 4.0 student? Why am I at the top of my class? In the end I’ll be working as an undocumented immigrant, at a job that pays minimum wage.”

When Obama passed the executive action, Tapia, who is currently a straight-A high school senior and a member of a United Way committee that aims to improve minority students’ access to a quality education in Delaware, was ecstatic. Obama’s executive order promised to help newly “DACAmented” youth like Tapia open doors that had previously been closed to them.

“Something as simple as getting a drivers license became possible, and I could start thinking more long-term about my career goals. Obama’s decision also gave me a sense of self-worth. It empowered me. It erased a sense of disillusion I carried deep within regarding my future,” the 17-year-old Tapia revealed.

Over the past two years, thousands of other young people have found themselves in Tapia’s shoes. As of March 2014, nearly 650,000 young adults had applied for deferred action, and over 550,000 had been approved.

This temporary permit has eradicated roadblocks that previously kept undocumented youth from integrating into mainstream America. 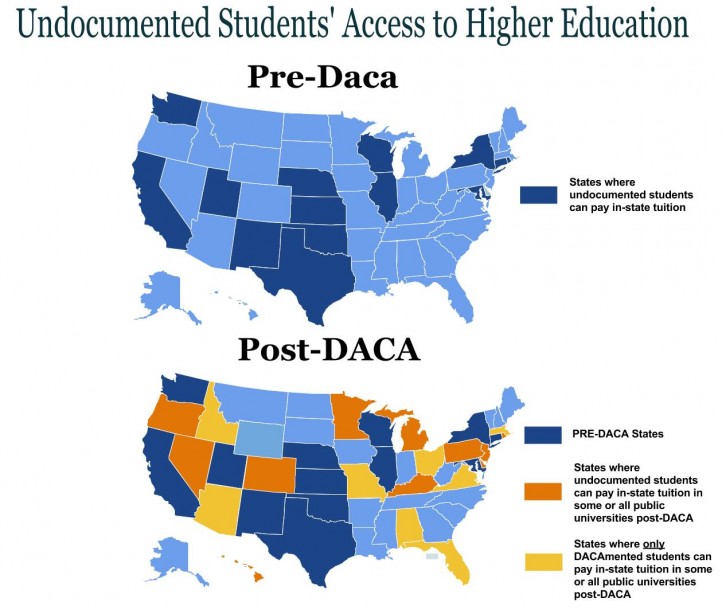 Since DACA was issued, 16 states have extended in-state tuition rates at public colleges to some or all of their undocumented residents. (Graphic by Diana Anahi Torres Valverde)

In blue states like Massachusetts, this means that DACAmented students can pay $13,230 instead of $26,645 a year to attend the University of Massachusetts at Amherst.

In more conservative states like Alabama, the effect has been even more profound. Alabama passed H.B. 56 in 2011, which banned all undocumented students from public universities and colleges. For Beatriz, a young woman who moved to Alabama from Mexico City when she was 2 and speaks English with a Southern drawl, the law was demoralizing.

When the law passed, Beatriz was a rising high school senior with a near-perfect GPA and plans to attend a public college in Alabama. She also volunteered as a tutor in her community and was an active member of the student council. Despite her academic record, Beatriz, who did not live legally in the United States, could not attend a state college.

DACA changed everything. Because students with deferred action no longer fell under the “undocumented” category, public colleges in Alabama began enrolling them as Alabama residents. When Beatriz heard that she could attend college and pay in-state tuition in Alabama, she felt a sense of relief. “All of my hard work was going to pay off,” she said in our hour-long interview.

Beatriz is now a second-year student at a community college in Alabama and plans to continue her studies until she finishes law school. Ultimately, she wants to work in her Alabama community as an attorney or public official to safeguard children’s right to a quality education.

Such policy changes in state education systems have made a college education more accessible for nearly 90 percent of the DACAmented population. But the benefits go far beyond greater access to public colleges.

Harvard University professor Roberto G. Gonzales recently released a report assessing how DACA has normalized life for previously undocumented people. His findings show that 59 percent of DACA-eligible youth have gotten a new job, and nearly half have increased their earnings. Some 57 percent have received new drivers licenses. Half have opened their first bank account, a third have applied for their first credit card, and nearly a quarter have obtained healthcare.

DACAmented youth, however, argue that the temporary program is not enough. The program is only for youth who were under 31 on June 15, 2012 and who are currently in high school or who have attained a high school diploma or GED. Even eligible young adults are forced to reapply every two years, and if their status lapses before their application for renewal is approved, the consequences—which could include the loss of work privileges or even deportation—could be devastating. More worrying still, a future president could revoke their protections with the stroke of a pen.

There are no protections at all for young people who didn’t graduate high school or who fall outside DACA’s age range. Additionally, more than 70 percent of youth with deferred action status have undocumented family members who could potentially earn their U.S. residency through comprehensive immigration reform.