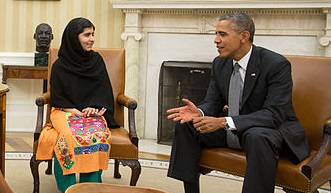 President Obama’s Meeting With Malala Yousafzai Was Riddled With Irony

Through drone strikes and raids, President Obama has taken out a host of Malalas.
By Michel L. Stone | October 14, 2013

To one Nobel Peace Prize winner from one who isn’t:  “Drones are fueling terrorism.”  So spoke Malala Yousafzai to President Barack Obama. She’s the 16-year-old Pakistani girl who was shot in the head by the Taliban for daring to urge the schooling of girls. She was nipped in the running for the prize by the team of chemical weapons experts seeking to corral Assad’s arsenal. Some pundits actually opined that Malala should take consolation in the fact that she is young and will have many more years to garner her own Nobel. The falseness of that note owes as much to its commodification of peace efforts as to the fact that Malala has indicated her intention to return to Pakistan, where the Taliban has vowed to execute her.

It was predictable the young martyr would become the darling of the western press. Her experience helps make the case for the implacable evil of our enemies. She is a genuine stand-in for the embarrassingly false image of helpless Kuwaiti babies ripped from their incubators by Saddam’s hordes, once upon a time. But, alas, she has gone off script, now lecturing the American president on, of all things, peace.

Did her interrupted schooling not include news of Barack’s Oslo win? I’m sure the President, loving father of girls, did not remind her. Still, irony was everywhere in the occasion. The young champion of universal education addressing him who presides complacently over the death spiral of American public schooling, as affirmative action gives way to prohibitive privatization. If an unmartyred Malala tried to come here, would she be admitted? Could she afford American “free” schooling? Would she fall in comfortably with the new pedagogy, that jettisons the humanities for the practical life and job skills that prepare our young for the programming of … drones?

Is there any chance that her words got through to Obama? He seems more interested in low-risk, low-casualty military action than in effective anti-terror policy, much less human rights. He has already taken out a host of Malalas, without regard for whether they ran afoul of Talibani educational edicts, or committed any other crime.

He is not, of course, a monster.  That’s the horror of it.  He is merely one of the last and highest-achieving products of our public school system. May Malala have many more years to do better.