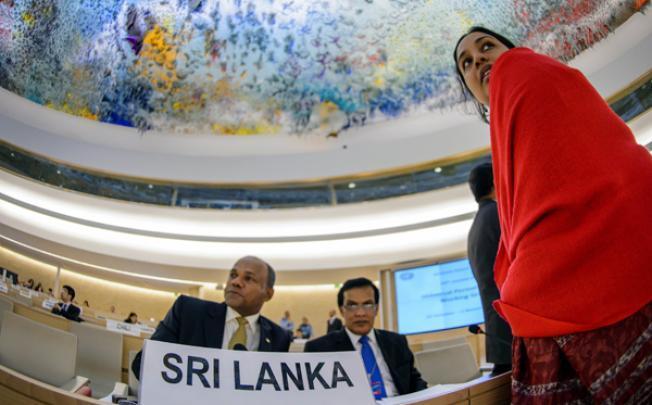 Pressing the Case for Reconciliation in Sri Lanka

The U.S. has led a diplomatic push against Sri Lanka's government, but that hasn't stopped it from cultivating a military alliance with the troubled state.
By Gibson Bateman | December 14, 2012 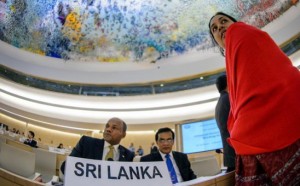 During the past year, one of the Obama administration’s biggest moves at the United Nations Human Rights Council (HRC) received relatively little attention inside the Beltway. In March 2012, the United States led a resolution calling on the government of Sri Lanka to implement the recommendations of the Lessons Learnt and Reconciliation Commission (LLRC), which examined the breakdown of the truce between the country’s warring factions, and “to take all necessary additional steps” to “ensure justice, equity, accountability and reconciliation for all Sri Lankans.”

It remains unclear what exactly drove the U.S. resolution, but the Sri Lankan government does not appear to have complied with it. The country continues to receive criticism for its human rights record, as disappearances and extrajudicial killings, among other issues, remain problems. Recent developments like a prison riot in Colombo that left 27 inmates dead and the arrest of several University of Jaffna students are also worrisome.

Politically, developments on the island nation seem to be going in the wrong direction as well. The government’s recent move to impeach its chief Supreme Court justice is a particularly discouraging sign, since the judiciary is widely regarding as Sri Lanka’s only branch of government with some semblance of independence. Critics have called the move an “unconstitutional witchhunt,” a retaliation for the court’s ruling that the central government could not unilaterally seize powers from the country’s provisional councils. Moreover, talks between the government and the Tamil National Alliance (TNA) have gone nowhere, and there is little hope for meaningful progress in the short term.

Yet since the passage of the HRC resolution last March, the government of Sri Lanka has adopted a far less bellicose tone when it comes to international diplomacy. The Rajapaksa administration has realized that, in order to be let off the hook for its dreadful human rights record and noncompliance with the HRC resolution, it will need to take a more tactful approach when dealing with the international community.

It appears that the administration is also trying to balance this clear effort to deflect international pressure by leveraging its domestic political support; the reality is that President Mahinda Rajapaksa remains quite popular. But even as the regime in Colombo gives the impression that it has complied with the HRC resolution, little could be further from the truth.

At Sri Lanka’s Universal Periodic Review (UPR) in Geneva, international delegations led by the United States voiced justified criticisms of the Sri Lankan regime, but that is to be expected at a forum like the UPR. Such proclamations don’t necessarily mean that the United States or anyone else will continue to pressure Sri Lanka to improve its human rights record.

As Sri Lanka is a middle-income country enjoying a period of relative peace, with no simmering conflict on the order of Syria, Washington may well have decided to carry on. After all, the U.S. “pivot” to Asia is much more about security than human rights.

The reality is that U.S.-Sri Lankan relations are in decent shape. It’s true that Washington keeps talking about the importance of reconciliation and accountability for wartime atrocities, but those exhortations do not appear to have interfered with economic relations or military cooperation. Indeed, with India wary of being drawn into a U.S. Cold War with China—and with U.S-Pakistani relations as choppy as ever—the Obama administration may well be looking for other partners in South Asia.

The United States will invariably look to strengthen military ties with Sri Lanka. Strategically speaking, it would be unwise for Washington to further antagonize Colombo and lose an ally in a region where it intends to maintain a significant presence in the coming decades. Sri Lanka is not a top tier foreign policy priority for the United States, but the Obama administration will be reluctant to cede all influence there–especially as China’s foreign policy agenda continues to expand.

In a recent article for Foreign Policy, the U.S. ambassador to the HRC defended the U.S. human rights record and its actions at the HRC during Obama’s first term. The ambassador explicitly mentioned Syria and Libya, and inveighed against the HRC’s purported bias against Israel. Not surprisingly, Sri Lanka was not mentioned. There was only a fleeting indirect reference to the fact that the United States has “helped restore confidence in the council’s ability to address politically difficult thematic and country-specific situations.”

In late September, a group of U.S. lawmakers criticized the Sri Lankan government’s LLRC Action Plan and advocated for continued engagement with the country to improve it, but it’s likely that the Obama administration hasn’t made up its mind about Sri Lanka one way or the other. With Obama currently looking at major shifts within his foreign policy and national security team, few decisions about Sri Lanka are likely to be made until 2013.

Continued U.S. engagement on this issue could compel change, but pressure on the Rajapaksa regime should not start and stop with Washington alone. Human rights activists and civil society leaders in Sri Lanka, in conjunction with likeminded members of the international community, must come up with a thoughtful, coherent advocacy strategy to be implemented in the next six months.

But critics of the regime need to set realistic goals. The words “international investigation” are toxic in Geneva right now. A good advocacy plan should highlight some of the positive LLRC recommendations, explain how they should be acted upon, and demand that the government take meaningful steps in the short-term to implement them. In addition, the impartial, timely, and precise monitoring of the LLRC recommendations will be of utmost importance.

The recent publication of shadow action plan to implement the LLRC recommendations is a significant step in the right direction, but planning and policy coherence must not end there.

In the long run, it’s likely that international forums are not the best way to pressure the regime. Effective diplomatic pressure on Sri Lanka will probably happen bilaterally. The regime probably recognizes this, which would explain why it has disregarded the HRC resolution. Yet here again, U.S.-Sri Lankan relations will be brought to the fore.

Outside of Washington, the wild card is India.

Like other rising powers, it seems clear that India would like to play a larger role on the global stage. If that is indeed the case, there is no better place to start than in neighboring Sri Lanka. In the past, Indian foreign policy vis-à-vis Sri Lanka has been rife with mistakes. Nonetheless, a couple things are clear: First, if India makes a more determined effort to push for meaningful change in Sri Lanka over the next several months, it would reassure Colombo that its poor human rights record and refusal to devolve power and genuinely address the calls for a political solution will not be tolerated. Second (and perhaps more importantly), pressure from India also has the potential to convince other members of the international community, including those in the Global South, that when it comes to human rights and national reconciliation, the current situation in Sri Lanka is simply unacceptable.