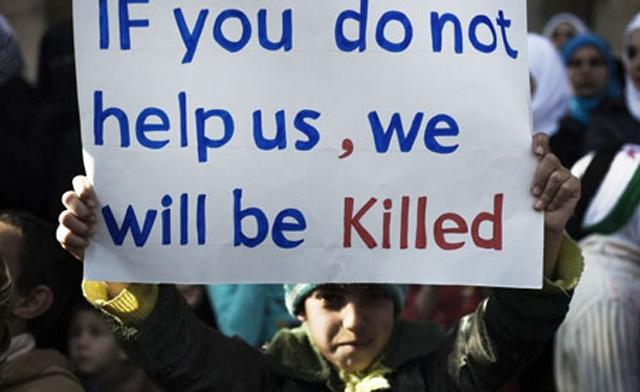 Military intervention in Syria is a high-risk enterprise. Here's a set of principles by which the intervening forces must abide.
By Adil E. Shamoo | April 27, 2012 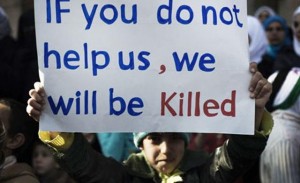 Progressives must seriously consider intervention in Syria despite our misgivings. Such an intervention, however, need not impose hegemony on Syria. Unfortunately, so far no one advocating intervention has pledged to abide by fundamental moral principles of respecting Syrians, their independence, and their future government.

For over a year, Bashar al-Assad’s regime has savagely killed and wounded Syrian civilians. The regime has also targeted international journalists when they manage to enter the country. The number of civilian deaths has topped 9,000. Armed opposition forces as well as ordinary civilians are struggling to keep the battle going against a well-equipped military and security forces. The United Nations recently reached a consensus to send 300 additional monitors to Syria. Violence has decreased but not stopped.

The country is divided along many religious, ethnic, and sectarian lines. Minorities fear that a new Sunni majority government might commit atrocities against them, similar to what happened in Iraq after the U.S. invasion. Islamic fundamentalists, and even al-Qaeda, have made their presence known in Syria. These groups operating in Syria raise the specter of a wide-ranging and brutal civil war.

Unfortunately, the U.S. television media, and to a lesser extent the print media, does not delve into the important fact that Assad receives support from a significant portion of the Syrian people, such as Alawites, Kurds, Christians, Druze, the merchant class, and part of the middle class. In a rare exception, Stephen Hadley, former national security advisor for President George W. Bush, acknowledged the extent of Syrians’ support for Assad in an op-ed in The Washington Post. Furthermore, Hadley had some reasonable suggestions on how to resolve the Syrian conflict, such as having the Syrian National Council — and not the United States — lead the removal of the regime, and formulating beforehand a concrete economic plan to help Syria.

The Western powers and the Arab League, with the exception of Saudi Arabia and Qatar, claim that there is not sufficient consensus to intervene militarily in Syria. Although the Western powers, including the United States, talk a great deal about helping Syria, they have been reluctant to do so for many reasons, including the lack of oil in Syria. Instead, Western officials speak about the inevitability of Assad’s downfall, as if it will happen without any additional outside pressure.

So far, I’ve opposed any military intervention in Syria for moral as well as practical reasons. Syria is in a civil war, and there is no unified popular uprising as there was in Tunisia and Egypt. Instead, a divided country is at war with itself. The opposition could suddenly seize power with the assistance of a foreign military forces and a slaughter of civilians by both sides could ensue.

Any serious plan for foreign military intervention in Syria must be fully transparent and strictly adhere to the following principles.

The intervening forces must withdraw within one year, though part or all of the intervening forces can be renewable for an additional year. However, the Syrian National Council should have a veto power over this extension. The Syrian people will be the sole conveners and writers of their constitution and hold elections after one year. The UN will send observers to monitor the intervention and the election. If the UN does not provide observers, international human rights organizations will serve as observers. The intervening forces are to use peaceful means to resolve conflicts if at all possible.

In the recent military interventions in Iraq and Libya, the intervening forces refused to abide by any principles. Iraq as a result was a calamity. In Libya, NATO interpreted its UN mandate for its own political convenience. Moreover, the UN should never have surrendered its power and functions to a specific military alliance (NATO). If the Western powers and the UN are as altruistic as they claim, they should be willing to abide by these principles.

In addition to the slaughter of innocent civilians in Syria, the relative stability of the whole region is at stake. The continued violence in the region can engulf the whole Middle East with incalculable consequences. This is why I challenge the UN, the United States, and Western powers to abide by the suggested strict principles for the military intervention and by neutral or nearly neutral organization such as the UN.

In the 21st century, the world needs to turn its back on naked hegemony in the name of humanitarian assistance to a truly altruistic intervention for the sake of saving thousands of human lives.