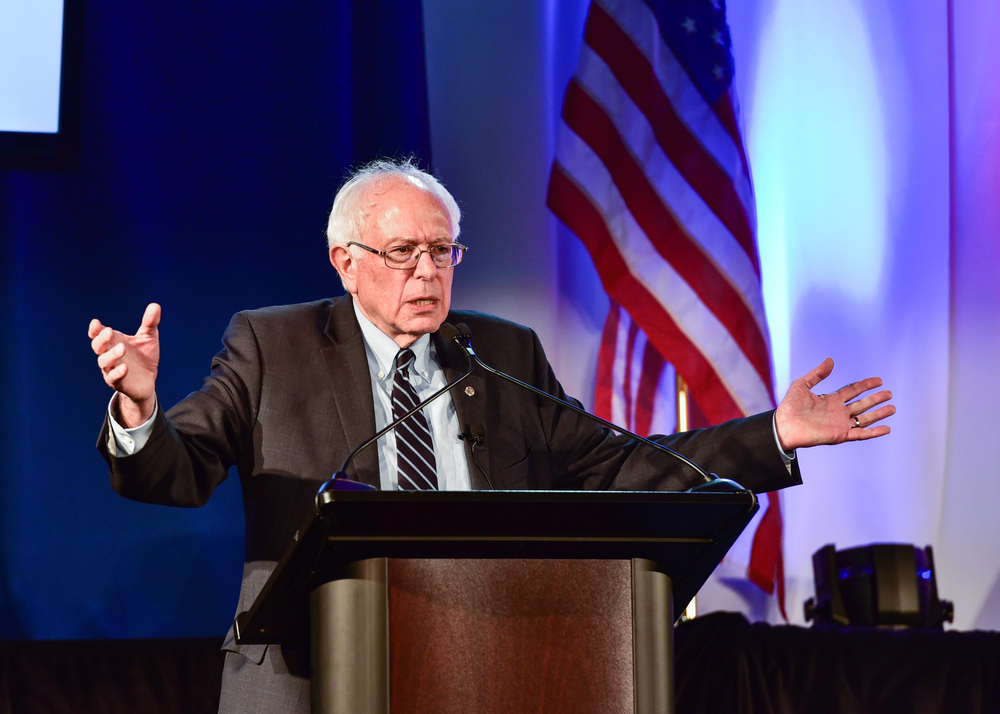 Progressives need to look to U.S. allies and U.S. history for inspiration.
By Dan Plesch | October 22, 2018

Bernie Sanders chose Fulton, Missouri for his major speech laying out the outlines of his progressive approach to foreign policy. The choice of venue was telling. In referencing Winston Churchill’s famous Iron Curtain speech, Sanders was aiming high. He was also gesturing in the direction of the U.S. past and U.S. allies.

Sanders declared that ‘the United States must seek partnerships not just between governments, but between peoples, and that, “our safety and welfare is bound up with the safety and welfare of others around the world.” More specifically he prioritized combatting climate change and the global inequalities of wealth and opportunity.

Capitalizing on the ideas and energy of Sanders, Democrats will have to act swiftly to make use of potential advances in the U.S. midterm elections to change the dynamics for 2020. Past lessons and present allies can open up great opportunities to strengthen progressive politics at home by pursuing them abroad as well. To do so requires looking for inspiration in the same places as Sanders: from U.S. allies as well as from the U.S. past.

Newbie insurgents with scant experience should not accept the status quo created by those who squandered the opportunities created by the end of the Cold War. Such architects of U.S. policy as John Kenneth Galbraith and Herbert Pell, working for Franklin Delano Roosevelt in the 1940s, often did so with little prior experience and against bureaucratic obstruction. As one British official noted in the 1940 election, no one in Washington voted for FDR except for the people.

A strategy minimizing fossil-fuel use has broader benefits. Increasing high-value employment is one. More importantly, minimizing the consumption of oil and gas has the strategic benefit of removing a key driver of global conflict and weapons production. Absent the competition for fossil fuels from the Gulf, that region would lose its importance.

Investment in renewable technology is decentralised and thus inherently egalitarian. That’s one reason authoritarian states rich in solar energy resist shifting to such sustainable sources. In 1943, having seen the impact of colonial and royal exploitation in Gambia and Morocco, FDR envisioned a Tennessee Valley scale investment in Africa. Today, the opportunity exists to reforest Mediterranean coastlines that have been bare since the Romans used the forests for firewood. A post-conflict aid package with solar power for producing energy, food, employment, and even fresh water from the sea would have produced a very different outcome in Libya after the overthrow of Muammar Gaddafi. As Andrew Bacevich explains, America has become inured to perpetual war. And unlike in World War II, it has no political and economic strategy to accompany the military, The military talk up their commitment to non-military solutions to conflict, but in reality it has nothing to offer.

Such a sea change is essential for addressing America’s perpetual global war and its matching budget. Democrats seeking to reconfigure the disproportionately large and wasteful U.S. military need a long-term strategy to handle the financial dislocation when foreign creditors no longer tolerate what military spending has produced: America’s unsustainable national debt.

Domestically, military reductions need to be matched district by district with Green infrastructure programs branded as national security. They will be accompanied by peace dividend tax cuts for the 99 percent and an increase to veterans’ benefits.

Internationally, the global control of weapons of mass destruction and the inventories of planes, tanks, and navies is technically far easier than in the days when Ronald Reagan urged “trust, but verify.” With Google Earth, crowd-funded satellite verification of all the world’s weapons is now possible, which makes a Nuclear Ban Treaty much more feasible.

With the Trump administration’s John Bolton keen on trashing all remaining arms control agreements, it will be tempting to just to stay on the defensive. But the opportunity exists to go much further. While media attention focuses on Russian and Chinese aggression, these states remain nervous of overwhelming U.S. firepower and have an incentive to agree to arms control across the board.

Ideas for confidence-building measures now enjoying a renaissance in Korea and established in the nuclear agreement with Iran can do much to prevent and defuse crises. In this area, a recent report shows that women’s involvement in peace processes make them more effective. Both Ireland and Sweden have feminist foreign policies boosting women’s role in security issues as well as promoting gender equality. Active promotion of human rights needs to be a mainstay for the United States. All too often men with guns insist on short-term “realist” solutions, when locally organizing women are the ones who can bring long-term change.

Thus, human rights, along with freedom of information and arms control, need to be integrated into U.S. foreign assistance programs and those of its allies.

Good ideas come not only from U.S. allies but from the U.S. past. For the Allies in World War II, human security was central to world security. To them, the neglect of full employment globally and unregulated economics were a recipe for war. Trade wars and financial instability were early warnings of fresh crises. British economist John Maynard Keynes proposed an international reserve currency other than the dollar in the 1940s, but it never made it to first base with the U.S. Treasury. Today, as power shifts, such reform becomes a necessity. The IMF and World Bank, whose founding charters required them to improve labor conditions and aim for full employment, must return to their founding principles of social democracy. Transforming global corporations is urgently needed, along the lines of Ecuador’s proposed treaty on business and human rights and the EU’s challenge of Google and Amazon.

These ideas can help Americans reinforce global progressive networks, including states and NGOs, in their efforts to roll back a global racist patriarchy. Without them, the future is grim indeed.

Dan Plesch is the director of the center for International Studies and Diplomacy at SOAS, University of London.