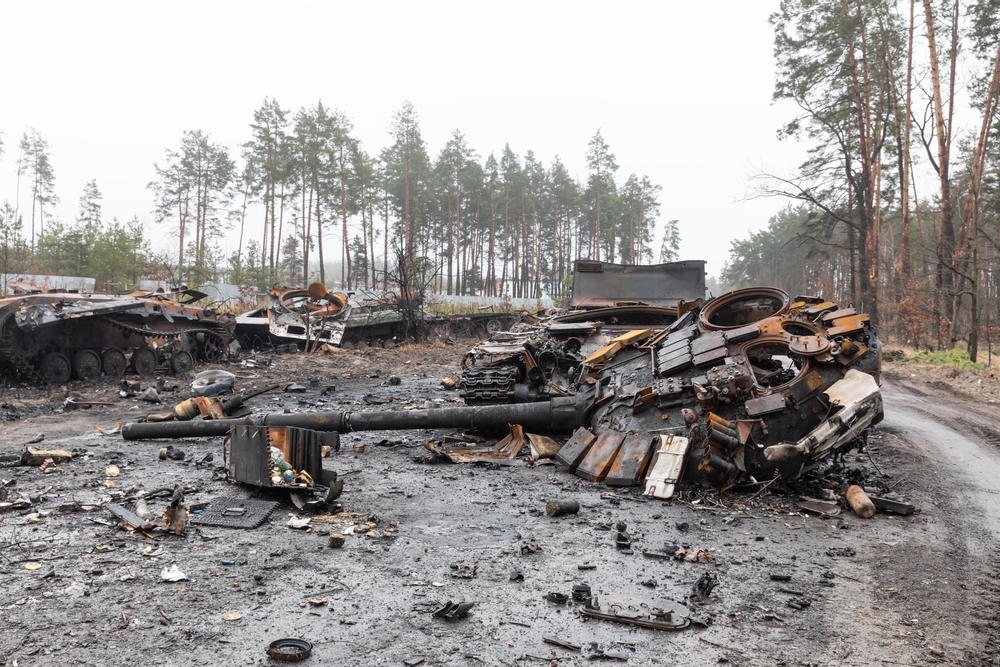 Destroyed Russian tanks and other military hardware in Ukraine (Shutterstock)

Promoting Change in Ukraine and Russia

Countering Putin's propaganda and rebuilding Ukraine are a winning combination for transforming a war-torn region.
By Ed Corcoran | April 26, 2022

As the war in Ukraine continues to demonstrate, the major strategic blunder of the Twentieth Century was the failure to integrate Russia into the industrialized world.

After World War II, the Western community did a great job of integrating Germany and Japan into the industrialized world. Both of them are now dynamic, democratic countries. But after the Soviet Union collapsed, the West largely stood by as Russia descended into economic chaos, eventually leading to the rise of Vladimir Putin. This blunder had a military dimension, with the totally unnecessary expansion of NATO to the east.

It was absolutely true that the West had to reach out to these newly independent countries of East Europe but doing it militarily was short-sighted. It has only helped fuel Putin’s claim that he is protecting Russia from a Western military threat. In reality, the only threat Russia faces from the West is democracy, and Putin is doing everything he can to protect himself against that.

His own blunder in Ukraine has made Russia’s autocracy vulnerable, with Putin particularly vulnerable personally. Although Putin has used this crisis to further consolidate his own power, his hold over the country has in fact eroded. Here are two actions that could promote a real transformation in Russia.

It’s important to widely publicize Putin’s failings, war crimes, and corruption—to the international community and specifically to the Russian people. Although Putin has done an impressive job of eliminating independent press within Russia, he has been unable to totally control social media, which is systematically widening its outreach to the Russian people.

But Putin is claiming a win in Mariupol and is expanding the scope of operations to include all of southern Ukraine. Continued fighting will mean more Russian casualties. The more visible those casualties become for a Russian audience, the more pressure it puts on Putin to agree to a ceasefire.

At the same time, sanctions have made corruption more visible. A recent detailed expose of oligarchs builds on an earlier expose in the Panama Papers, thousands of documents that revealed corrupt financial ties of several prominent Russians. Exposes of the corruption of Putin’s inner circle have previously mobilized considerable opposition to the Russian leader’s rule.

The Russian community badly needs to develop a short, powerful, and credible alternative vision of Russia. This would be an alternative to the distorted historical vision that underlies Putin’s war effort. The Russian people still broadly support Putin because they see no alternative to his warped vision.

Ukraine has great potential to blossom economically, in stark contrast to the economically declining Russia. With relative quiet now in Central Ukraine, Kiev is already coming back to life and Ukrainian officials are already working at reconstruction and development. This week there was news about a chemical plant in Kiev coming back on line and about a steady flow of returning refugees. The Ukraine war has badly impacted international agricultural flows and an effort is already under way to reverse this.

Now is the time for Western assistance to begin a shift from guns to butter, adding significant economic support to the current military assistance. This has to start with a comprehensive assessment of what is most needed for reconstruction and a focus on the most critical elements. As the RAND Corporation discusses in detail, external aid also has to look forward, to how the economy can best develop and how to do this transparently, avoiding Ukraine’s history of corruption.

The European Union has started working on a post-war reconstruction plan, with a cost estimated between 200 and 500 billion euro. This would be an equivalent to the post-World War II Marshall Plan, a comprehensive European recovery program that set the standard for government-led solutions to economic crises. Even as the war continues on the periphery of Ukraine, immediate economic support is essential in the center. Ukraine is already asking the Biden administration to provide at least $2 billion per month in emergency economic aid. Nothing would more vividly undermine Putin’s concept of an inferior Ukraine than dynamic redevelopment of the country.

Meanwhile, the West needs to reassess its economic ties with Russia. The ongoing controversy over the Nord Stream 2 pipeline highlighted Western dependence on Russian energy. This system of offshore natural gas pipelines establishes a steady flow of Western money into Russia and undermines the sanctions applied after the invasion of Ukraine. The West needs to assess what sort of overall economic ties would be beneficial for all the nations involved. Many Western firms would like to re-establish operations in Russia, but they need to do this in a framework that supports the Russian people at large and not just a narrow slice of the oligarchy.

This combination of increasing information availability and economic pressures could go a long way in promoting transition in Russia to a government with broad popular support. This is unlikely to result in a fully democratic government in the short run, but it could help to push Putin aside and result in more collaboration with the West. The short-term objective should be promoting a progressive Russian government interested in renewed economic ties.

As the war in Ukraine subsides, Western outreach to the Russian people is essential, encouraging popular pressure to promote government realignment. Britain’s Defense Ministry said that Russia likely wants to demonstrate significant successes ahead of Victory Day on May 9, which marks Russia’s critical role in winning World War II. But any Putin effort to promote Victory Day rallies in support of his regime could well backfire by turning into rallies supporting the values that World War II was fought for. Putin could have real difficulties containing rallies that he himself helped organize and that could even develop into a first step in his downfall.