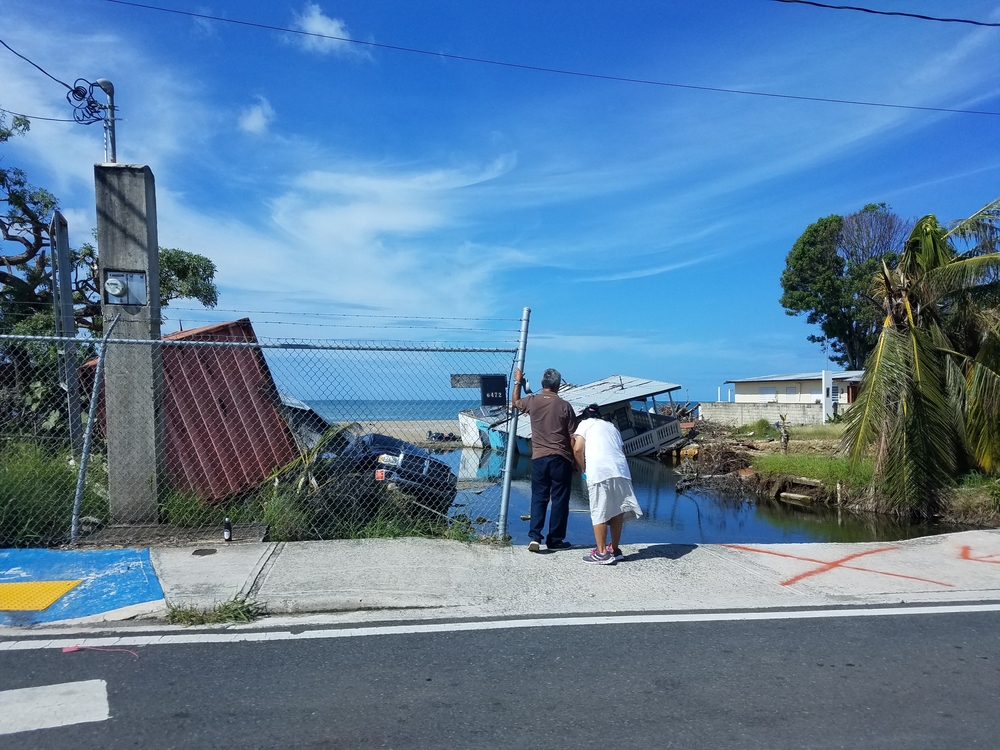 The disastrous impacts of Hurricane Maria were made by inequalities of race, income, and access to U.S. political power.
By Basav Sen | July 5, 2018

Residents of Puerto Rico are confronting the prospect of a fresh hurricane season, which will likely bring five to nine hurricanes, including one to four major hurricanes. The island, badly battered by last year’s Hurricane Maria, still hasn’t recovered. We continue to learn more about how dire the disaster has been.

A recent academic study showed that the death toll from Maria was likely about 4,700 — or more than 70 times the “official” count of 64. This was no mere “natural” disaster. The impacts of Hurricane Maria were to a large extent attributable to inequalities of race, income and — critically — access to political power.

The majority of deaths in Puerto Rico weren’t from people being hit by flying debris or drowning in floods. The largest number of deaths occurred because hospitals and clinics lost power, rendering them unable to provide treatment to critically ill patients. Others died because water treatment facilities shut down, increasing the risk of potentially fatal waterborne diseases.

This situation persisted for unacceptably long. Only 43 percent of the island’s residents had access to electricity even two months after the hurricane—barely half the global average. That’s on par with the 41 percent share in Benin, and considerably less than the 76 percent share in Bangladesh.

In one of the wealthiest countries in the world, then, access to electricity fell to the level of some of the world’s poorest countries. Even today, thousands of Puerto Ricans remain without electricity.

Puerto Rico is a 99 percent Latinx island. Its 43.5 percent poverty rate is nearly 3.5 times the national average, and its median household income is barely one-third of the U.S. median. Can we stop pretending these facts had nothing to do with the scale of the disaster and the inept official response to it?

Turns out, it wasn’t just the aftermath of the storm, but what came before.

The delay in restoring electricity was partly because the island’s grid hadn’t been maintained over a decade-long recession—a crisis worsened by Washington-imposed austerity policies that prioritize loan repayments over the needs of Puerto Ricans. The hurricane “lifted the veil on the pre-existing crisis,” says Jesús Vázquez of Organización Boricuá, a Puerto Rican food sovereignty organization. “But we knew it was there, because we were living it constantly.”

Puerto Rico is effectively a U.S. colony, with no representation in Congress. Philip Alston, the UN’s Special Rapporteur on Extreme Poverty who recently toured the United States, explicitly linked the territory’s economic and environmental devastation to its colonial status. “Political rights and poverty are inextricably linked in Puerto Rico,” he said. “In a country that likes to see itself as the oldest democracy in the world and a staunch defender of political rights on the international stage, more than 3 million people who live on the island have no power in their own capital.”

This isn’t the first time the UN has paid attention to U.S. colonialism in Puerto Rico, either. It holds hearings on decolonization of Puerto Rico every year and produces lengthy reports. The United States doesn’t bother to attend the hearings, blowing one off as recently as this month.

What of the storm itself? The intensity and frequency of hurricanes are increasing because our economy’s addiction to burning coal, oil, and gas is warming our world. Scientists have warned about this for decades, but our political leadership has failed to act.

Every activity of the fossil fuel industry — production, transportation, processing, combustion and waste disposal — is dirty and dangerous. Exposure to these hazards and their consequences fall across striking race and income disparities everywhere in the U.S. and worldwide.

It’s a problem that infects the mainland, too. From residents of the 95 percent Black town of Port Arthur, Texas, who confront extraordinarily high cancer rates because of oil refinery pollution, to the Indigenous Alaskan villages at risk of disappearing because of sea level rise, poor people and people of color disproportionately bear the costs of our unhealthy addiction to fossil fuels. And the consequences of climate change are expected to make poverty and inequality worse.

Our unequal political system places greater value on the profits of polluters than on the basic needs, or even the lives, of most of humanity. Our political leadership gets away with this immoral calculus because of the systematic disenfranchisement of vulnerable people at the bottom and legally sanctioned bribery at the top.

This vicious cycle — in which racial, economic, and other forms of inequality are both a cause and a consequence of environmental devastation — needs to be broken with powerful movements that confront the systemic roots of these inequalities.

The great news is that these movements are happening. People in Puerto Rico and in the Puerto Rican diaspora in places like New York have been demanding a just recovery led by Puerto Ricans and for the benefit of all Puerto Ricans, and working to build community resilience from the ground up.

Here on the mainland, affected communities including Indigenous peoples are at the forefront of resistance to polluting fossil fuel infrastructure in Minnesota, Louisiana, and elsewhere. Indeed, shortly after the latest death toll figures in Puerto Rico were released, thousands marched on state capitals across the country, demanding solutions to poverty and environmental justice as part of the new Poor People’s Campaign.

For Puerto Ricans bracing themselves for more storms and blackouts this summer, Pacific Islanders watching rising seas drowning their homelands, and countless other marginalized peoples in the United States and worldwide paying the price for our dirty energy and economic systems, these movements couldn’t come sooner.

This piece was produced in partnership with In These Times.