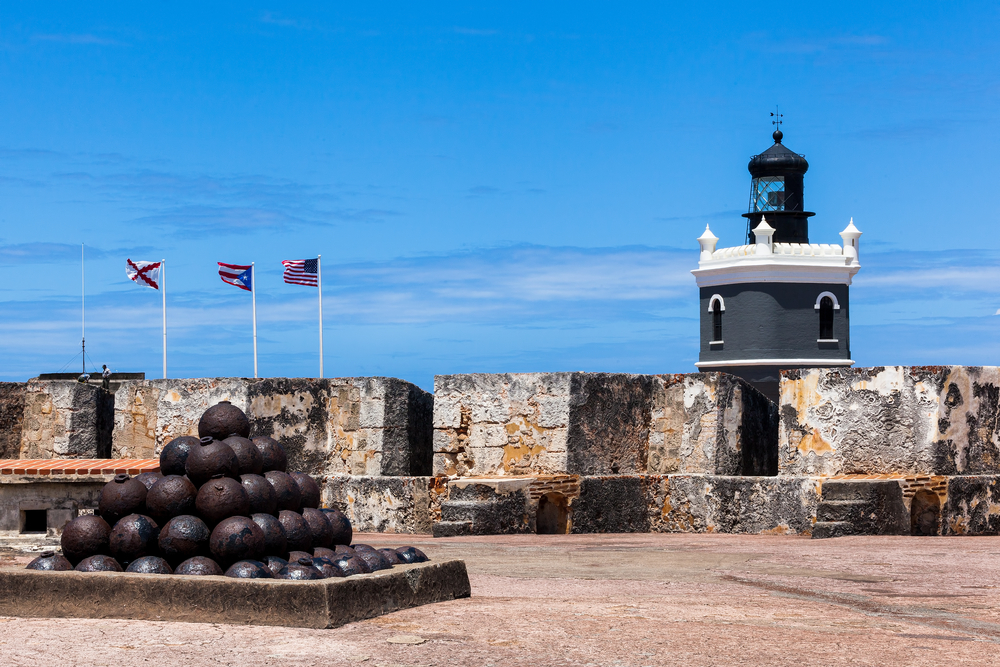 Puerto Rico: The Gibraltar of the Caribbean and Launchpad for Empire

This Caribbean island is both a colonial outpost and a linchpin of U.S. power projection overseas.
By Jovanni Reyes | November 15, 2022

The archipelago of Puerto Rico is the oldest continuous colony in the world.

Ever since Columbus set foot on what’s believed to have been the northwest coastline of Borikén in November 1493, Puerto Rico has belonged to some colonial power. The Spanish called the archipelago “la llave de las Antillas,” the key to the Antilles, because of its geostrategic location. Spain set up “Fort” Puerto Rico as their first line of defense to protect their vast American dominions and fend off European competitors with the construction of two massive forts at Castillo San Felipe del Morro and Castillo San Cristobal. They also used the island as a commercial pit stop for galleons before crossing the Atlantic with their loot.

Puerto Rico transferred hands from Spain to Britain back to Spain, and since 1898, the island has been a colony of the United States. Since entering the global imperial system, Puerto Rico has been leveraged as a strategic enclave against Puerto Rican sovereignty, land, and livelihood.

Spanish rule in Puerto Rico lasted for 405 years. The United States intervened in the brutal Cuban war for independence in 1898 on the side of the rebels and, in the end, subverted Cuban independence and claimed Spain’s territorial possessions in America and the Pacific in what is known as the Spanish-American War. By December 1898, the Treaty of Paris ceded the territories of Puerto Rico, Guam, the Philippines, and the Mariana Islands to the United States as war booty.

The colonial experiment continued under new management. Almost immediately, the Americans occupied abandoned Spanish military garrisons throughout the Island, including the enormous fortress El Morro. An army of administrators, teachers, scientists, engineers, religious clerics, businessmen, land speculators, and agriculture corporate representatives followed to re-engineer Puerto Rican society, economy, and the landscape, and to exploit its resources. Through this system, the Americans installed a new colonial order on the Island and instilled a new colonial subject.

Many of the same strategies used to subjugate American Natives were applied to Puerto Ricans. “Kill the Indian and save the man” became “civilize” the Puerto Rican “brute.” American teachers were systemically deployed to Puerto Rico to restructure the existing education system to prioritize American values and the English language, and missionaries sought to convert Puerto Ricans from Catholicism to American Protestantism. Just as they recruited Apache natives to fight rebel Apache bands, the U.S. Army set up an all-Puerto Rican Provisional Battalion to serve as auxiliaries to the U.S. military and help with population control. As more battalions were created, this grew into the 65th Infantry Regiment, nicknamed the “Borinqueneers,” who fully integrated into the U.S. Army and later served with distinction in the Korean War.

As westward expansion and subjugation of native peoples solidified U.S. control in continental North America, American capitalists and policymakers continued the march for dominance southward and across the Pacific.  Puerto Rico continued to serve as a strategic enclave— a Forward Operating Base providing a bridge to the wider region as the “Gibraltar of the Caribbean” and a choke point of control.  With Puerto Rico as a garrison colony, Americans were able to project power across the Caribbean Basin and ward off potentially hostile European powers. Puerto Rico became the headquarters of the Department of Defense of the Antilles for the US Army, and the Naval Base Roosevelt Roads became the largest overseas U.S. naval installation in the world with the longest airstrip in Latin America. This military center, along with the American naval base in Guantanamo Bay, Cuba, was also tasked to defend, until the handover in 1999, the colonial enclave of the Panama Canal Zone.

U.S. citizenship was imposed upon Puerto Ricans in 1917 under the Jones Act. That same year the United States entered the Great War in Europe, and some 236,000 Puerto Ricans were served draft notice, with 20,000 deployed. Since then, Puerto Ricans have participated in every U.S. war and military conflict.

Militarization in Puerto Rico continues to be multipurpose. In addition to projecting US power in the Caribbean Basin, Puerto Rico has served as a training ground for the U.S. military to influence and train foreign troops for wars and conflicts. It served as a transit point for resources and supplies sent to Africa and Europe during the Second World War. It was a lab to experiment in modern warfare with modern weapons, such as napalm, Agent Orange, and depleted uranium. And it was a stage to rehearse large-scale combined arms military exercises later applied in major theaters of war such as the D-Day invasion of Normandy, the invasion of Panama, the bombings of Yugoslavia, and the invasion of Iraq.

The U.S. military’s footprint on the Puerto Rican landscape is vast and inescapable. The US military not only took over Spanish military posts but built four additional main military installations and many more auxiliary camps and installations, a series of connecting roads and railroads, antenna stations for telecommunication, and airstrips for cross-island movement of supplies and persons. Over 30 municipalities have had a military installation at one time or another. An island that is a little over 100 miles long and 36 miles wide has given up tens of thousands of acres of land to military installations with thousands of acres directly expropriated from small farmers. Vieques, an island municipality adjacent to the main island, had 27,000 out of 31,000 total acres of land appropriated for military use. Its people were forced to emigrate or relocate to what remained of the island. A similar fate befell Culebra, another island municipality, which together with Vieques would serve for decades as the largest range for combined arms military exercises that included large-scale bombings from naval ships, amphibious assaults, and air-to-surface target practice for fighter jets and bombers.

The militarization of Puerto Rico has had devastating ecological impacts. To expand the Spanish naval base in San Juan Bay, swamps and mangles were destroyed and filled with lumber, dirt, and minerals from a nearby quarry. Six miles south in Guaynabo, 1,515 acres were expropriated to establish Army Garrison Fort Buchanan, built with materials taken from the same quarry and forest, and which later grew to as large as 4,500 acres. To the east in Ceiba, a large swath of land from El Yunque was deforested for lumber to build Roosevelt Roads Naval Station. In Cayey, lumber from the Carite Forest built Fort Henry Barracks, the headquarters and training center for the 65th Infantry Regiment. Along the northern coast in Aguadilla, 3,796 acres of agricultural land was taken from small farmers to construct army base Camp Borinquen, which later became Remy Air Force Base and part of the Strategic Air Command, one of three major commands of the U.S. Air Force. These are just a few of the many military installations that have littered Puerto Rico throughout 124 years of colonization by the U.S.

Military Occupation with a Familiar Face

These military bases and installations have wreaked widespread damage in Puerto Rico in order to advance U.S. geostrategic interests in a variety of ways.

They have been vital to projecting power abroad and also to squashing rebellions at home, such as the uprisings of 1950 that championed independence from the United States. Not to mention, they leave behind huge contaminants and unexploded ordinance.  Such is the case in Vieques where the promised clean-up after the closing of the range has not manifested.  With technological advancement, many of these military facilities have since become obsolete and repurposed. The land and facilities were eventually turned over to the local government for their use and development, or to house other American federal agencies like the Coast Guard, Customs and Border Patrol, FBI, and DEA.

Today, the remaining facilities are home to roughly 100,000 U.S. military personnel and affiliates from the Puerto Rican National Guard, the Air National Guard, the Reserves of various components of the Armed Forces, some active duty service members, ROTC, Veterans Affairs, DoD civilians, and veterans, retired or otherwise – almost all being Puerto Ricans.  Although overt Anglo military presence on the island has diminished, its destructive and subjugating legacy remains, and a more subtle military occupation persists.

Puerto Rico saw its peak in overt American militarization during the Second World War up until the Vietnam War.  Most of these bases and facilities have been turned over to the local government for civilian use, like the Luis Muñoz Marin International Airport in San Juan   But some bases remain military facilities. At Camp Santiago, a large training center in Salinas, on the southern coast of Puerto Rico, National Guard troops train and do their drills. It’s also a place where officers and soldiers from throughout Latin America and the Caribbean receive training from U.S. military personnel. Fort Buchanan was temporarily the headquarters of the U.S. Southern Command when it transitioned from Panama to Doral, Florida.

The Puerto Rican National Guard, when activated, automatically integrates into the US Army and Air Force. They were activated in the recent so-called “War on Terror” and the invasion of Iraq.  The Reserves are already part of the U.S. Armed Forces. With a population of 3.2 million and another four million in the diaspora, Puerto Ricans already make up a very large demographic in the regular armed forces. This dual consciousness, of being Puerto Rican and an American soldier, also serves to solidify American colonialism in Puerto Rico.

Jovanni Reyes enlisted in the United States Army in 1993 and deployed to the Balkans in 1996 as part of NATO’s first-ever military intervention, which culminated in the dismemberment of Yugoslavia into six statelets. By 2002, he was no longer moved by the pretexts and false narratives cheerleading for war. He resigned from the military in 2007 and began to work for peace. Jovanni is a member of About Face: Veterans Against the War. This essay is part of the Feminist Peace Initiative’s “New Visions for A De-Militarized Turtle Island,” an op-ed series featuring grassroots leaders challenging U.S. militarism at home, offering feminist and eco-social perspectives, and promoting concrete alternatives.