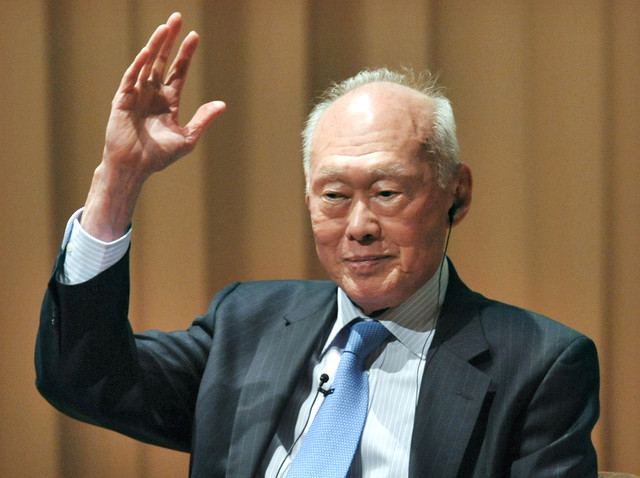 By the time Putin has accomplished what Singapore’s Lee Kuan Yew and China’s Deng Xiaoping did — setting up an orderly political succession system for nourishing authoritarian governance — the West has to re-calculate how they could cope with Russia and China simultaneously.

One of the seldom-mentioned masteries of Lee Kuan Yew (1923-2015) [Note 1] is that after 31 years in service as the merciless founder and captain of Singapore, he had structured an intra-party succession system to make his signature steering style sustainable. Goh Chok Tong, hand-picked by Lee, took up the Prime Minister post in 1990 and did not deviate any one inch from Lee’s ideological contrivance during his 14-year tenure. For example, Goh made it crystal clear that Singapore should not be ashamed of “low rank for press freedom”. Although Singapore is a close ally of the United States, it was ranked the 150th out of 180 in Reporters Without Borders’ Press Freedom Index 2014 (Russia 148th, China 175th ), and the 152th out of 197 in Freedom House’s Global Press Freedom Rankings 2014 (Russia 176th , China 183th ) [Note 2].

In 2004, Goh passed on the baton to his mentor’s son — Lee Hsien Loong — who still rules the state with an iron fist. True, Lee Kuan Yew passed away but his paternal governance is here to stay very much alive in this city-state which has one of the world’s highest GDP per capita at US$55,182 in 2013 (USA $53,042, Japan $38,633, Germany $46,268) [Note 3]. Few analysts reckon that a fundamental change is underway. What it means, at least to the journalists and tourists, is that they must be aware of caning as a legal whipping penalty as well as banning of chewing gum. Despite numerous challenges arising in this digital age, Lee’s political succession system works like elixir to ensure that, generation after generation, only those selected elites who are committed to administering his creed can sit in the ministry offices.

At almost the same time when Lee Kuan Yew paved the way for Goh in 1989/90, Deng Xiaoping (1904-97) passed on his power status to Jiang Zemin and erected his own system for intra-party succession, Jiang followed Deng’s instruction to hand over his official authority to Hu Jintao in 2002. In 2012/13, Xi Jiping took over smoothly from Hu and became the head of the third generation Politburo teams after Deng. Despite all sorts of forecasts that the communist regime would collapse “very soon”, Xi is now busy with laying the foundation of a multi-polar world by, for example and the most recently, inviting such nations as Saudi Arabia, Turkey, Germany, Italy, Russia and Vietnam to join his Asia Infrastructure Investment Bank [Note 4].

Singapore since 1955 and China since 1987 have demonstrated that authoritarian governance with an orderly political succession system has been able to, like it or note, implement long-term policies without disruption caused by a particular leader’s death or downfall, thus giving rise to a new species of powers in the world arena.

Vladimir Putin (1952-) has been widely criticized for all his aggressive moves in, just name a few, Russo-Georgian War 2008 and the ongoing Ukraine secession crisis but the fact that he took THE risk to let Dmitry Medvedev (1965-) complete the tenure as the Russian President for 2008-12 is an indication that he is neither Stalin nor Mao nor Tito who all refused to leave the office until death. However disingenuous he may be, Putin has shown his capability of knowing when to proceed and when to stop. It would not be a surprise to see Putin step down from the presidency in 2020 at the age of 68. Both Lee and Deng remained influential after official retirement and Putin will definitely be no exception. Nevertheless, it could be the beginning of a new post-strong-man era which would reveal its time horizon differences from the notorious personal life-long dictatorships in the past.

Alongside Medvedev, Vladislav Surkov (1964-), Vasily G Yakemenko (1971-) who heads Nashi (a youth movement), and even young female Alena Arshinova (1985-) who leads the Young Guard of the ruling party United Russia are all hard-liners getting prepared to carry on Putin’s determination, either on stage or behind the scene, to “restore the glory to Russia” [Note 5]. Given the feasible tactics showing how Lee’s People’s Action Party (PAP) could monopolize the Singaporean parliament for more than 60 years through censorship and gerrymandering, it is not impossible for the United Russia to duplicate PAP’s success in maintaining majority control over State Duma for decades to come. In other words, from a longer time horizon to see this Eurasia power, Putin and his successors have the potential of strengthening Russia to the extent that its neighboring countries would become untouchable by the NATO.

For sure, the predictions on all sorts of collapses in Singapore, China and Russia and the deliberations on how threatening and evil these “un-free” states are will continue to circulate. Nonetheless, without acknowledging the cultural developments and the unprecedented strengths of the new political succession system evolving among the descendents of Tsar Peter the Great and Huangdi respectively, policy makers and congressmen in the West may continue to be riveted at deploying military means, thus overlooking the need of taking A long time (in terms of hundreds of years) for other countries to comprehend their Enlightenment concepts such as political equality and trias politica. A better alternative to pointing a gun to force another civilization to respect human rights is, through more cultural exchanges, to present yourself as a good role model to these non-American or non-Christian nations who simply want to emulate the West rather than conquer the world.