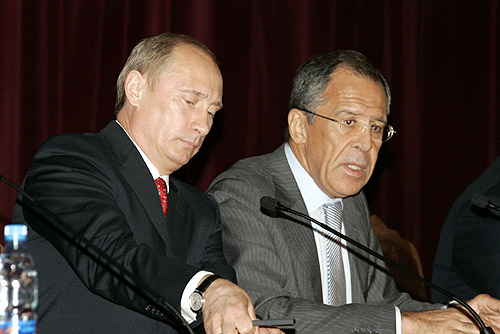 Putin Could Steal That Nobel From Kerry

On Sept. 8, Secretary of State John Kerry made the offhanded suggestion that if Syrian President Bashar al Assad were to “turn over every single bit of his chemical weapons to the international community in the next week,” the United States would call off its plans to launch missile strikes at Syria. Russia then offered a proposal to Syria, which it accepted, to submit its chemical weapons to international supervision under which they would eventually be destroyed. Acting Editor of Foreign Policy in Focus Peter Certo wrote: “John Kerry may have just accidentally earned himself a Nobel Peace Prize.”

But, at the New York Times, Steven Lee Myers reports:

… suddenly Mr. Putin has eclipsed Mr. Obama as the world leader driving the agenda in the Syria crisis. … Although circumstances could shift yet again, Mr. Putin appears to have achieved several objectives, largely at Washington’s expense. He has handed a diplomatic lifeline to his longtime ally in Syria, President Bashar al-Assad, who not long ago appeared at risk of losing power and who President Obama twice said must step down. He has stopped Mr. Obama from going around the United Nations Security Council, where Russia holds a veto, to assert American priorities unilaterally.

More generally, Russia has at least for now made itself indispensable in containing the conflict in Syria [as well as] boxed Mr. Obama into treating Moscow as an essential partner for much of the next year, if Pentagon estimates of the time it will take to secure Syria’s chemical weapons stockpile are accurate.

Many of us in the West applaud the alacrity with which Putin has acted. Still, we always need to bear in mind that this is a leader who oppresses dissidents, oversees widespread corruption, oversaw death and destruction in Chechnya, and may have been complicit in the Moscow bombings of 1999.

Russian Foreign Minister Sergey V. Lavrov is meeting with U.S. Secretary of State John Kerry in Geneva today to work out the details of the plan under circumstances so daunting that, writes Yochi Dreazen at Foreign Policy, There’s Almost No Chance Russia’s Plan for Syria’s Chemical Weapons Will Work.

Experts in chemical weapons disposal point to a host of challenges. Taking control of Assad’s enormous stores of the munitions would be difficult to do in the midst of a brutal civil war. Dozens of new facilities for destroying the weapons would have to be built from scratch or brought into the country from the U.S., and completing the job would potentially take a decade or more. The work itself would need to be done by specially-trained military personnel or contractors.

But, yesterday, at the New York Times Room for Debate, Jeffrey Lewis of the Monterey Institute of International Studies wrote:

A number of commentators have noted the slow progress of the United States in eliminating its own stockpile of chemical weapons under the Chemical Weapons Convention. But the reasons are completely irrelevant to the situation in Syria.

It reflects local politics in the United States of siting and operating chemical weapons incinerators. [And] environmental groups in Syria will not slow the work of the United Nations and Organization for the Prohibition of Chemical Weapons with lawsuits.

… the international community has moved faster when it mattered. The United Nations Special Commission in Iraq supervised “the destruction of over 480,000 liters of live chemical weapons agent, 28,000 chemical munitions and approximately 1.8 million liters, and over 1 million kilograms of some 45 different precursor chemicals” in a little less than two years — from June 1992 to May 1994.

Finally, also at Room for Debate, Cheryl Rofer, chemist and proprietor of Nuclear Diner, reminds us not to put the cart before the horse:

… it will be essential for the fighting in Syria to stop to allow inspectors in and to build plants. Negotiating a ceasefire may be more difficult than destroying the weapons.

Cross-posted from the Foreign Policy in Focus blog Focal Points.