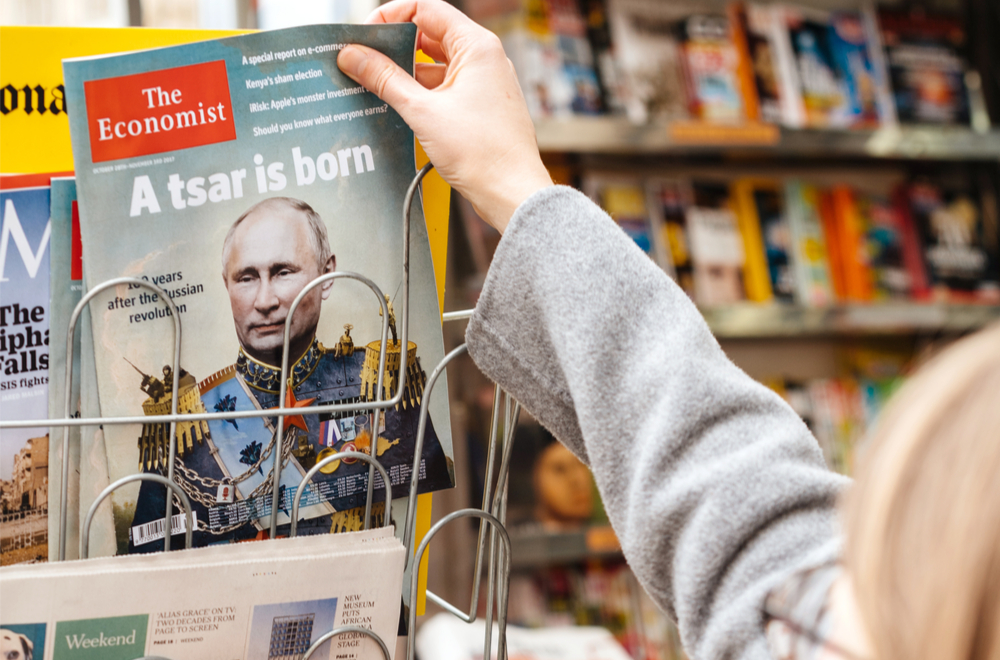 Things are not going as planned for President Vladimir Putin.

In addition to facing world outrage and mounting resistance in Ukraine, he is confronting daily protests across Russian cities and over a million signatures on a Russian-authored petition against the war.

Putin, fearful of his destiny spinning out of control, may have images running through his mind of cornered dictators like Iraq’s Saddam Hussein and Libya’s Muamar Gaddafi being dragged out of their hiding places, en route to ignoble execution. He may also be contemplating the final days of Soviet leaders Nikita Khrushchev and Mikhail Gorbachev, who were both vacationing in Crimea when they got word that Communist Party members in Moscow were conspiring to remove them from power.

But while Putin is likely focused on the more recent past, a more appropriate analogy may be the February Revolution of 1917.

Tsar Nicholas II entered the First World War thinking he would use a rapid victory to secure his empire. Instead, he was compelled to abdicate and witness the unraveling of Romanov rule and Russian imperialism.

Putin, like the final Romanov tsar, has championed the causes of Russian ethnonationalism and illiberalism. Both have claimed that democracy, the free press, truly representative legislative bodies, impartial judiciaries, and the right to protest have absolutely no role in their realm and are signs of infection from a decadent West.

Both silenced burgeoning civil society via oppressive censorship, issued prohibitions against the right to gather in public, and eliminated opposition parties, representative institutions, and any politicians who dared oppose them through extensive state violence. And in both cases, this repression has fueled opposition rather than quell it.

What better way to redress this problem than a convenient war?

Certainly, supporting Serbian Slavs was not the not the only reason why the Russians became embroiled in World War I. Like the other great powers, Russia hoped to capitalize on the imminent demise of the Ottoman Empire and extend its rule over the Slavic Orthodox peoples of that empire for geopolitical reasons, not just ethnic ones.

Nicholas’ interests lay not only in extending Russia’s power over the Dardanelles Straits, but also Western Ukraine.

Nicholas also hoped he could use Great Russian ethnonationalism to unite his fragile empire and to gather its borderlands closer to the imperial center. Nicholas II presided over a multi-ethnic, multi-confessional contiguous land mass at a time when “nationalism” was a Western notion, an “ism” associated mostly with revolutionary, centrifugal forces pulling such empires apart.

Yet he refused to believe that non-Russian Slavic peoples in the empire, such as Ukrainians and Poles, would object to having their languages, cultures, and traditions stamped out and replaced by Russian mores. Sound familiar?

We are all painfully aware of Putin’s attacks on Ukraine. We may be less cognizant of just how long this has been going on. Since 2004’s “Orange Revolution,” Putin has resorted to overt and covert methods to prevent Ukrainians from liberating themselves from Kremlin manipulation and asserting independence.

Like Nicholas II, Putin does so in the name of “protecting Russian compatriots” — that is, heritage Russian speakers and those of Russian background — but his concerns extend beyond ethnic Russians and the territories in which they constitute a majority. Instead, Putin’s worldview precludes the very possibility of Ukraine as a separate sovereign country. That worldview accommodates only one nation and only one brand of nationalism — Russian ethnonationalism that turns other Slavs into junior partners.

Putin began formulating his beliefs at the beginning of his political career. When he lamented the breakup of the Soviet Union, he was not mourning the end of the Leninist/Bolshevik Communist Party, but the death of a centralized, ethnonationalist state with an all-powerful leader. That goal became apparent in a statement accidentally posted to state-run Russian media celebrating victory over Ukraine and the reunification of “Great Russia” with “Little Russia” and “Belorussia” — before it became clear that such a victory had not come to pass.

In other words, Putin is clinging to a vision similar to that of Nicholas II.

Also similarly to Putin, Nicholas II had an outsized view of his empire’s fiscal strength. Indisputably, Russia was on the rise and industrializing rapidly on the eve of World War I, even faster than the United States or Germany. Yet there was reason for concern: Russia was plagued by income inequality, stood on the outskirts of the European business cycle, and, most importantly, had tenuous access to foreign currency and little purchasing power once a war that was meant to be swift dragged on and caused the Russian economy to collapse.

Putin has also miscalculated Russia’s economic resilience. He, too, believed that it would be impervious to fallout from an invasion of Ukraine because he thought the war would be a short one. Like Nicholas II, he miscalculated badly.

Putin presides over vast natural resources and an advanced and educated workforce. Yet Russia remains an economic monoculture reliant upon the fossil fuel sector that has brought its oligarchs great wealth while the living standards of average Russians are actually shrinking.

Russia remains heavily dependent on fossil fuel revenue and the world market. As I write, multinational corporations are dumping their holdings in the Russian energy sector, the Moscow stock market has been shuttered, and the Russian economy is cratering in the face of being cut off from access to foreign currency.

Personality Cults and Delusions of Grandeur

Part of Nicholas II’s and Putin’s blindness stems from their belief in the correctness of their worldviews and in the personality cults they spun about themselves.

Nicholas tenaciously clung to the notion of the glorious past of the Great Russian nation and its special place in world history. Taking great pains to manufacture and control his image, he was accompanied almost constantly by a specially outfitted cinematographer charged with filming the tsar at work and play.

All of this culminated at the tricentennial of the Romanov dynasty. Insistent on re-enacting the 1613 “Election of Mikhail Romanov,” Nicholas II starred as a venerated saint and masculine hero whose physical endurance, athleticism, and talents eclipsed those of mere mortals. But this attempt at reasserting the divine right of Romanov rule was met with anything but popular acclaim along the icy streets of St. Petersburg in February of 1913.

A mere four years later, the Romanov dynasty met its end along the same streets when women, soldiers, and workers came together to voice chants of “Land, Bread, and Peace” — the battle cry of the February Revolution of 1917.

Putin’s efforts to manage his public image exceed even those of the last tsar. He has perfected a near-parodic performance of masculinity commonly presumed to be based on the protagonist of Seventeen Moments of Spring, a 1973 spy thriller series commissioned by then-KGB head Yuri Andropov to recruit would-be James Bonds to the secret service. Putin was so enamored of this image that he used the series soundtrack as his backdrop to a 1992 documentary he commissioned to introduce himself to the St. Petersburg public when he joined the administration of Mayor Anatoly Sobchak.

Throughout his career, Putin has worked hard at cultivating a tough-guy image, variously featuring himself shirtless and chiseled, wrestling with bears, performing judo moves with Olympic athletes, engaging in sports while clad in camouflage or black leather, and surrounded by scantily clad beauties who sing longingly for a man “like Putin.”

But, just as Nicholas II failed to live up to the hype and proved a poor military strategist who met the real concerns of his Russian subjects with callous disregard, the reality of the man Putin falls far short of the image he has constructed for himself.

Putin may have exuded machismo from the cockpit of a fighter jet in Grozny during the last Chechen war. But in reality, the war he manufactured in Chechnya as a popularity stunt led to unnecessary loss of life and a series of hostage crises in Russia whose rescue missions he botched, resulting in hundreds of avoidable deaths. Twenty years later he is doing this again in Ukraine.

Putin has underestimated both Ukraine’s will to fight back and the world’s support for Ukraine. If anything, Russia’s invasion has amplified Ukrainians’ backing of President Volodymyr Zelensky and redoubled their efforts to assert national sovereignty. This is true even in parts of the country where Russian-speakers predominate. Some of Putin’s champions, including oligarchs such as Oleg Deripaska and Igor Sechin, have read the tea leaves and are voicing opposition to the invasion of Ukraine.

I wonder whether we are witnessing not just the end of Putin’s misadventure in Ukraine, but the beginnings of a new “February Revolution,” one that conveniently coincides with the one that took place 105 years ago next week on March 8th, 1917.

On that day, women and workers and soldiers in Petrograd came together to demand real democracy and civil rights, along with “Land, Bread, and Peace.” They were not willing to serve a commander whose leadership they no longer trusted. Perhaps what we are seeing in the streets of St. Petersburg where throngs of Russians have gathered to protest the Kremlin’s invasion of Ukraine are the opening salvos of a new uprising.

There is already indication that Russian troops may be reluctant combatants.

Petersburg is the birthplace and resting place of Tsar Nicholas II; it would be ironic, at the least, if Putin, whose hometown is also Petersburg, met his fate there as well.

Abby M. Schrader is a Professor of History at Franklin & Marshall College in Lancaster, Pennsylvania.