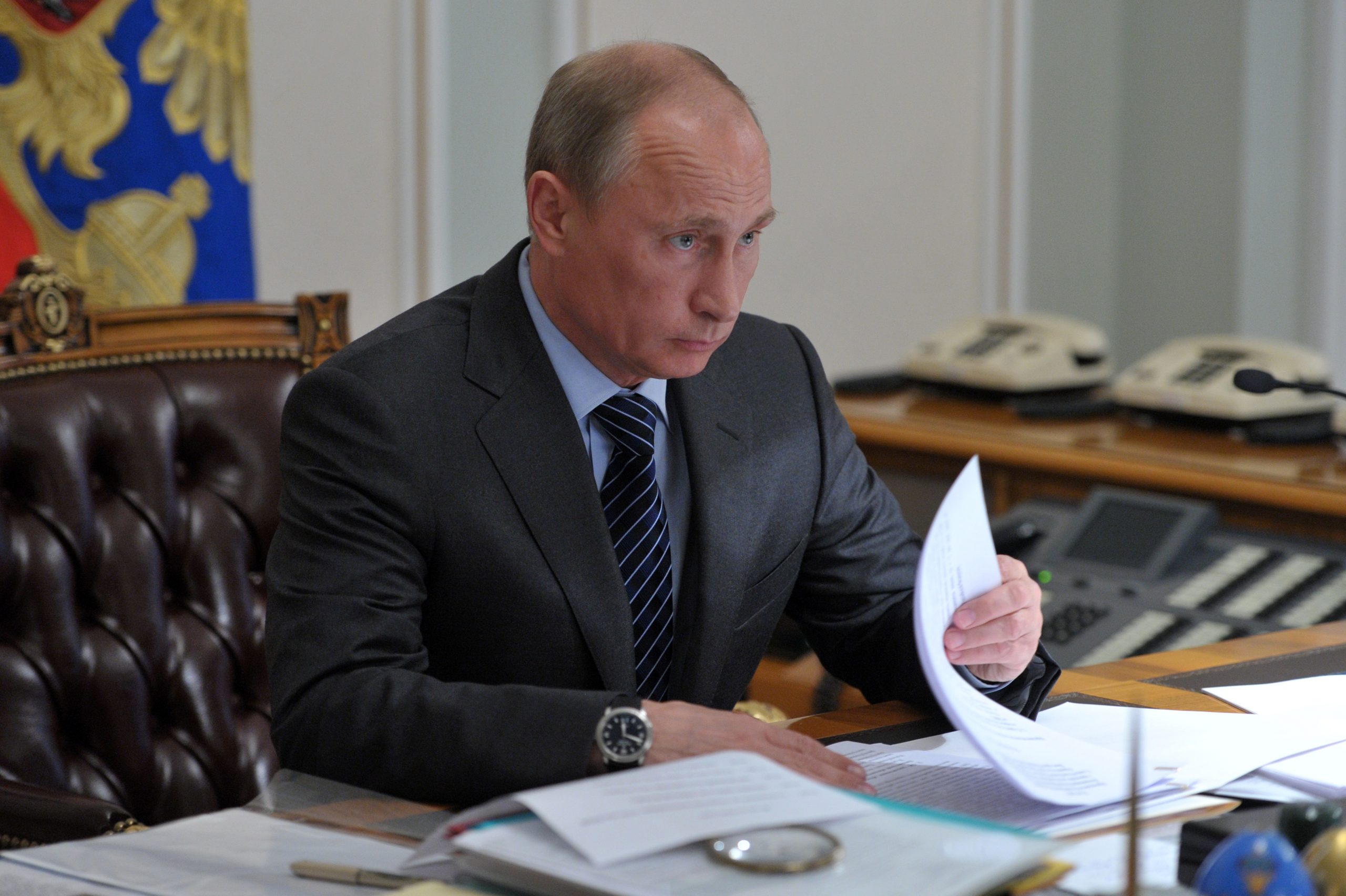 Rather than promote a new Cold War, now is the time to definitively end the last one.
By Ed Corcoran | April 9, 2020

With the coronavirus already infecting over a million people and severely impacting the global economy, there is a new recognition of a need to reduce global tensions, what the UN secretary general has called a coronavirus truce. The situation is particularly stressful for Russia which only initiated a lockdown the end of March and is probably just at the beginning of an infection curve. This coincides with an oil price war with Saudi Arabia, badly impacting a Russian economy heavily dependent on oil. President Trump spoke with both leaders, threatening to impose tariffs if there is no resolution. But with significantly reduced demand due to the coronavirus, prices will certainly remain low.

This stressful period also coincides with an effort by Vladimir Putin to extend his presidency. Parliament has already approved necessary constitutional changes; a required referendum, originally scheduled for April, has been postponed and is already attracting significant political opposition.

Overall, Russia already faces opposition over inadequate coronavirus measures, a major drop in oil revenue and a looming political crisis. Together these provide a significant opportunity for re-engagement with the United States.

Putin consolidated his position by blaming the West for Russian economic problems, skillfully appealing to traditional Russian ambivalence. Stressing the need to counter NATO expansion into Eastern Europe, he rejuvenated the army, a source of pride for the average Russian. Putin has announced a major increase in defense spending, boasting of powerful new weapons that could make American defenses obsolete. His belligerent military emphasis is fundamentally a show for the Russian people. He needs a visible enemy to distract public attention from his plutocratic elite, from internal repression, and from actions undermining Russia’s professed democratic ideals. His central fear is not some Western intrusion, but internal unrest. This is the basic reason he reacted so strongly to the Rose Revolution in 2003 and the Orange Revolution the following year that removed pro-Russian governments in Georgia and Ukraine. His central objective is retaining power, while provoking the West is a means to that end.

Putin’s broadly confrontational stance, which emphasizes Russia’s rightful position as a world leader, has gained domestic support. But there have also been negative consequences beyond Russia’s borders. By supporting breakaway provinces in Moldavia and Georgia as well as annexing the Crimea and backing up an occupation of eastern Ukraine, Russia has undermined democratic movements on Russia’s periphery. Strong Russian support for Syrian President Bashar al-Assad resulted in thousands of deaths and major refugee flows into Europe. As the United States pulled out of northern Syria, abandoning its Kurdish allies, Russia surged in as the new powerbroker. Closer relations with an increasingly autocratic Turkey deteriorated as the two militaries clashed. Across the globe, Russian support has allowed Venezuela’s Nicholas Maduro to remain in power. This effort is particularly sensitive to the oil market; one of Russia’s major oil companies, Rosneft, is just recently exiting its investments there.

Russian meddling in the 2016 U.S. presidential elections reached well over 100 million Americans with false, misleading, and inflammatory postings on Facebook, messages on Twitter, and over 1,000 videos on YouTube. Although America is vulnerable to such deceptive postings, Russia is vulnerable to truthful ones. Russian meddling may well have been retaliation for the Panama Papers, the release of thousands of documents from a Panamanian law firm that exposed corrupt financial ties of several prominent Russians. A furious Putin attributed the leak of the papers to Western intelligence. This allowed him to depict the revelations as simply Western propaganda but also demonstrated his sensitivity to exposure of corruption.

The United States has a considerable advantage in open broadcasting. For almost 80 years, Radio Liberty has been a major challenge to Russia, becoming the most listened-to Western radio station in the country. In 2014, Radio Liberty launched a new Russian-language TV news program, Current Time, which has reported on such sensitive topics as Russian intervention in Syria, the poisoning of a Soviet refugee in London, and the Panama Papers. In 2018, its website had over 90 million visits, its Facebook page had some 600,000 followers, and it was active on YouTube, Twitter, and other social networks.

Democratic ideals have strong resonance in Russia. The more difficult everyday economic situations become, the more the government has to suppress unrest over low living standards. Independent candidates have made electoral politics increasingly competitive, and the government reacts with voter suppression. Over 1,000 people recently protested in Moscow over barring opposition candidates from the city ballot.  Open broadcasts have a significant potential to influence developments in Russia. A current wave of arrests against journalists vividly illustrates the Kremlin’s concern about popular protests, while thousands recently marched to mark five years since the assassination of opposition politician Boris Nemtsov. It is understandable that the Russian populace wholeheartedly embraced a strong leader who brought stability and pride back to Russia. But discontent over corruption and economic conditions have been growing. Health and demographic issues and a reliance on raw material sales downgrade the potential for economic development.

Presidents Trump and Putin have had a longstanding personal rapport, but the White House has carefully controlled details of their phone calls. During their most recent conversation on March 30, 2020, the two leaders agreed that the oil price war between Russia and Saudi Arabia did not suit either of them. Russia expressed willingness to reduce oil output. There was also discussion on Venezuela and the need for an eventual democratic transition. And they agreed to work together on addressing the coronavirus. Two days later, a Russian military plane with needed medical supplies landed in New York. “We can provide emergency equipment needed to save Americans,” a Russian spokesman said. “We are sure that the U.S., if necessary, will also assist us and we will gladly accept the aid.”

This is clearly an ideal time for the two sides to re-engage.

The West should now do what it should have done 30 years ago: integrate Russia into the industrialized world. Western open broadcasting can make Russian corruption and repression as transparent as possible, exposing the underlying reason for low economic levels and the total fiction of a Western threat. NATO current focus on Russia as an enemy only supports Putin’s threat narrative, while some misstep could actually result in armed conflict. It also drains huge amounts of resources from positive uses (including disaster preparations) to supporting interminable wars.

NATO should issue a strong statement de-emphasizing military operations and focusing on Russian political, social, and economic integration into the industrialized world. By demonstrating that it is not a threat, NATO can emphasize instead economic collaboration.

Russian ambivalence toward the West has been a driving force for centuries. A real move to integration could have strong appeal to a Russian public increasingly dissatisfied with the internal situation. Russian protestors want democracy, but have nothing to rally around. The United States should give them something, actively inviting Russia to join in development efforts. Programs that promote real development and provide Russia its own position on the world stage can have a strong appeal to the Russian people.

Overall, it is economic pressures, opportunities and incentives that could most effectively move Russia toward a more democratic and cooperative posture. A NATO outreach policy needs to be supported by significant actions. The coronavirus will certainly pressure NATO to modify its standard of 2 percent of GDP supporting defense expenditures. A small portion, perhaps initially 2 percent of NATO’s budget, could be dedicated to a new Russian Partnership Fund to improve Russia’s internal economy and increase collaboration. The fund could work with Russian representatives to identify projects that could have maximum impact for minimal cost while simultaneously demonstrating project transparency and accountability.

The United States and Russia already have an existing partnership in joint operations on space exploration as well as continuing cooperation on securing nuclear materials and knowledge. This approach can be expanded to include assistance with infrastructure issues, medical issues, educational exchanges, environmental issues, and other scientific matters. Russia, for example, has a totally inadequate highway system while the United States has deep experience building a nation-wide transportation network. Investment projects outside the oil industry are badly needed, but that has been a main focus for Russia for years. And, of course, the coronavirus is also making medical shortcomings in both countries increasingly visible. Diplomatically, collaboration with Russia could help resolve confrontations in Afghanistan, Venezuela, Ukraine, and Syria.

Rather than promote a new Cold War, now is the time to definitively end the last one.