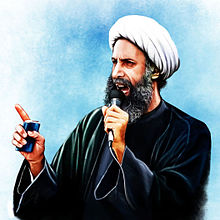 Iran refrained from over-reacting to the execution of Sheikh Nimr al-Nimr. (Photo: Wikipedia)

One goal of Saudi Arabia’s recent mass executions, including a prominent Shiite cleric, was to goad Iran into over-reacting.
By Rob Prince | January 12, 2016

When Israel – Netanyahu in particular, but past Israeli prime ministers as well – wants to “stick it” to Washington, knowing that it could complicate Obama’s agenda some, it announces it is going to build more settlements in the Occupied Territories at a sensitive moment for Washington, the goal being, repeatedly, to sabotage any genuine progress towards a diplomatic solution to the Israeli-Palestinian crisis.

It works like a charm every time! Washington bristles, perhaps makes a few critical remarks, but never does anything that will seriously undermine the underlying strategic relationship. This political tango has gone on for decades ad nauseam. In the end, it is based on an illusion, that being that Israeli policy is somehow independent of Washington’s overall policy. Nothing could be further for the truth as Washington holds virtually all the cards in the relationship in its hand. The idea that the “tail is wagging the dog” is, in a word, nonsense.

Saudi Arabia, that other U.S. Middle Eastern strategic ally, is also trying to influence Washington, but, it appears, less successfully at present. Like Israel, given the parameters of the “Obama Doctrine” the Saudis have a certain degree of political maneuverability from Washington although they cannot stray very far, if at all, from Washington’s overarching plans for the region.

While it had other goals as well, it seems that the main purpose of Saudi Arabia’s mass execution was to provoke Iran into overreacting in such a way that the P5+1 agreement (the Iran nuclear deal) would be scuttled. While critical of the Saudi executions, Iran has so far limited its response to a verbal rebuke. It did not take the bait and over-react.

The Saudi head lopping was the largest mass execution since 1980 when 63 rebels involved in the 1979 rebellion in Mecca were likewise “put to the sword.” This time some 47 people – the most prominent among them the Shi’ite cleric Nimr al Nimr – were executed on January 2 inside prisons in 12 Saudi provinces; 43 were beheaded, the other four executed by firing squads. Most of the others were executed for organizing or participating in a series of al Qaeda-linked attacks in the years after 2003.

But the victims also included Shi’ite protesters from civil rights movements in Saudi eastern provinces that erupted as a part of the early Middle East wide Arab Spring uprisings. Shi’ites make up anywhere from 15-25% of Saudi Arabia’s overall population and have a history of suffering discrimination from the Wahhabist Sunni government in Riyadh. They are heavily concentrated in the country’s eastern regions, where, incidentally, the bulk of Saudi oil reserves are located.

Worse, the executions have backfired and become a Saudi public relations nightmare. This current wave of Saudi repression has met with near universal condemnation, including here in the United States. The media here has a long history of ignoring the kingdom’s shameful human rights record. But this time it appears the Saudis have gone too far, even for U.S. mainstream outlets. There is a growing concern that King Salman, who took over on the death of his brother, Abdullah, a year ago, has instituted a more aggressive, narrow nationalist overall Saudi regional policy has “gone too far.”

Besides shaking up some, some of the old ways the royal families ruled, Salman appointed a young, inexperienced – if articulate in the English language – Adel Al Jubeir as foreign minister who has “pushed the envelope” on Saudi foreign policy towards Syria, Yemen, but most especially antagonistic towards Iran. As an indication of the degree to which the Saudis are feeling the walls crash in all around them, Al Jubeir is the first member of the Saudi royal family itself to hold the foreign ministry post.

A January 5, 2016 NY Times article was unusually frank. It quotes Fawaz Georges, director of the Middle East Center at the London School of Economics: “…the regional turmoil the executions have caused…could tear the social fabric between Sunnis and Shi’ites in Saudi Arabia.” Later in the article it notes that the Saudi policy of targeting Iran’s growing regional influence (at Saudi expense) as “reckless” “including a decision to go to war with Yemen.”

Add to this Saudi oil politics. Of late the Saudis, doing more damage to their own economy than anyone else’s, have decided to engage in an oil price war by flooding global oil markets with their crude, betting that they can outlast their oil competitors with the $700 billion in U.S. treasury bonds to fall back on.  Such a policy ultimately will hurt those countries whose economies remain undiversified and use oil as their only (or almost only) source of foreign exchange. Not true for either Russia or Iran, both of whom, will be negatively affected, but less so than Saudi Arabia itself. One of the ironies of the sanctions against Iran is that it has forced the country to diversify economically away from total dependence on oil and it has done so.

Beyond the cynicism, downright inhumanity and barbarism of these beheading, which merit all the international outcry they are receiving, one must ask the question: what’s the deal? After all, Salman and Al Jubeir knew well that going down such a path would provoke such a vibrant negative reaction. But they didn’t give a hoot about public opinion, did they, as long as they were assured that Washington, other than making a few feckless public statements, would stand behind them. Again, the comparison with Netanyahu’s Israel – immune to criticism as long as the White House considers Israel its strategic ally – comes to mind. As long as Washington – be it the Bush or Obama White House – stand with its regional strategic allies Israel and Saudi Arabia, it matters little what the rest of the world thinks.

What comes through, as the NY Times article suggests, is that the beheadings were a not-so-subtle way of the Saudis “sending a message.” What message though? To whom and for what purpose?

Like most public relations events – for that is precisely what these executions were – there are several purposes. The global backdrop for these primitive executions comes into play. Just yesterday (Jan. 7, 2015), the New York Times noted that U.S. Secretary of State John Kerry had announced that Iran is close to complying with last summer’s nuclear deal, “a step that would compel the U.S. and other Western nations to immediately suspend many sanctions on the Islamic republic.” The article goes on to state that the “landmark could usher in a new phase in the budding U.S.-Iranian rapprochement.”

Should the sanctions be lifted – and there is every indication that they will be at present – it is more than likely result in an Iranian economic boom of unprecedented proportions. Even before the formal lifting of sanctions, since the signing of the initial agreement this past September, there has been something approaching a flood of foreign financial and business people in Tehran hoping for contracts with the Iranian government.

While there are other factors involved, the timing of the event suggests the Saudis are trying to sabotage the P5 +1 agreement by Iran to over-react to the killings, especially of Nimr al-Nimr. Riyadh was betting that Iran would respond to the killings in such a way – militarily or politically – that pressure would be put on Washington to back out of it, which would effectively kill the process. Add to the executions, the recent Saudi bombing of the Iranian embassy in Sana, Yemen and an indication of just how far the Saudis are willing to go to provoke their neighbor across the Persian Gulf comes into focus.

It is no secret that the Obama Administration’s signing of the P5+1 agreement in Iran was unpopular among American hawks, AIPAC and the like who went all out to sabotage the agreement themselves. There remains pressure, significant pressure at that, to find a way out of the deal before it is finally realized. The Saudi provocations – should the Iranians “bite” – would give Washington a way to scuttle the agreement while maintaining their dignity – and of course blaming their exit on the Iranians.

But much as Russia did not take Turkey’s bait after the recent downing of its fighter jet over northern Syria by responding militarily (and thus creating a pretext for a great NATO presence in Syria) so from all appearances the Iranian response to the Saudi beheadings has been critical…but controlled. They haven’t taken the bait, and there is little indication from where I am sitting, that they will. Iran is anxious to have the sanctions lifted and was willing to curtail much of its nuclear energy program to achieve that goal.

In fact, the Iranians are, in this period between the signing of the P5+1 agreement and its implementation, being very cautious precisely not to antagonize the Saudis, not to “rub it in” so to speak that Iranian influence in the Middle East is rising while the Saudis find themselves more isolated. It suggests how important it is to Tehran that the sanctions be lifted. For they understand that should the agreement be finalized, that it will usher in – not just a new era in U.S.-Iranian relations – but give considerable dynamism to their economic development. And it is economically – rather than militarily – that Iran wants to compete with the Saudis, as they understand all too well, that between themselves and the Saudis there can be no military solution.

The Saudis understand the vulnerability of their position should the agreement be finalized and in a kind of frenzy, under the leadership of their young, inexperienced, arrogant and increasingly reckless foreign minister, Al Jubeir – who spent too much time cozying up to neocon and AIPAC like elements at Washington cocktail parties, are seeing just how far they can push things. As the finalization of the agreements with Iran come into focus, all appearances suggest that the Saudi saber-rattling approach is backfiring and going nowhere.