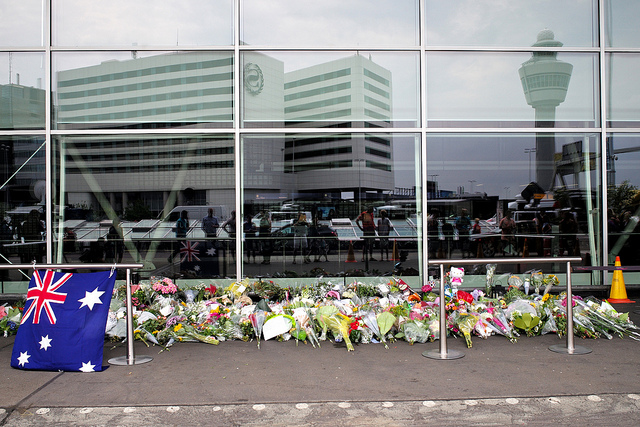 Red Carpet Into Harm’s Way Rolled Out for Flight MH17

Between Ukraine airline officials keeping planes flying too low and the pilot diverting his plane into the vicinity of the military transport, MH17’s fate was sealed.
By Russ Wellen | July 20, 2014

Yesterday I posted that Russian Premier Vladimir Putin may have been making some sense when he blamed Ukraine for the destruction of MH17. Putin had said that “certainly, the state over whose territory this occurred bears responsibility for this awful tragedy.” Apparently he was referring to flawed decisions about flight path and air traffic by Ukraine aviation officials. As the Wall Street Journal reported:

“I can’t think of any reason why you would increase a restriction to 32,000 feet when the bad boys have just demonstrated a capability to go all the way,” …. The airspace should have been closed, he said.

…does the Ukrainian government use this as an excuse to wipe out the rest of separatists [?]

After writing that, I had second thoughts that a 3,000-foot difference in flight-path altitude provided sufficient evidence that the Ukrainian government displayed a passive-aggressive attitude toward the shooting down of an airliner by the separatists. It seemed more likely that it just wanted to keep air space open over the Ukraine to avoid panic that would hurt commerce.

We’ll return to that, but first let’s address another question: why did the separatists think MH17 was a Ukrainian military supply plane when it was flying out of the Ukraine toward ― and was not far from ― Russia? At the Daily Mail ― before you scoff, this is an interview with a Russia expert ― Dr. Igor Sutyagin, Research Fellow in Russian Studies at the Royal United Services Institute in London, says:

That may be why separatists thought MH17 was a military supply plane (that and, it would seem, weak binoculars). Meanwhile, Dr. Sutyagin said that “information had been leaked from a source he was unwilling to name that the pilot of MH17 ‘felt bad’ about his course over Ukrainian airspace, so changed direction.” Presumably that means the pilot had a premonition that he was flying into trouble. More from the Daily Mail:  “Dr Sutyagin’s theory appears to be supported by a route map which shows the passenger plane travelling on a different course to the ones taken by the previous ten MH17 flights.”

Malaysia Airlines said it filed a flight plan requesting to fly at 35,000 feet through Ukraine airspace but was instructed by Ukraine air traffic control to fly at 33,000.

Unless the higher flight path was occupied by another airliner, why the refusal? Meanwhile, aside from MH17 flying toward where the Ukrainian mechanized troops were hemmed in, Dr. Sutyagin said that “several kilometers to the south is a Ukrainian Army heavy transport plane, an IL76, or Candid, which has the same echo as a 777 on a radar screen” and which was also heading toward the Ukrainian brigade. Dr. Sutyagin:

“They tried to shoot down the transport delivering supplies to the brigade. They believed that they had been firing at a military plane, but they mistakenly shoot down a civilian airliner.”

Whatever the case, the separatists, upgraded from MANPADS (shoulder-fired missiles capable of bringing down helicopters) to actual anti-aircraft weapons, were as trigger-happy as kids with their first BB gun. Between that and Ukraine airline officials keeping planes flying too low and refusing MH17’s request to fly on a higher flight path, and the pilot diverting his plane into the vicinity of the military transport, MH17’s fate was sealed.