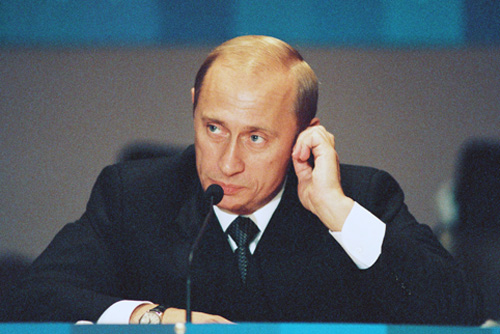 Referring Syria to ICC Could Lead to Peaceful Leadership Transition

Russia’s resistance to refer Syria to the ICC runs counter to President Putin’s current campaign to be seen as the good guy focused on diplomatic solutions.
By Annie Castellani | September 18, 2013

The international community might be headed in a positive new direction guided by peaceful proposals intended to address the violence in Syria. The question is whether the current option – that Assad hand over his chemical weapons – will be effective and timely. As with the intervention debate, the end goal of this option is unclear.

Fortunately, statements last week by President Barack Obama and Russian president Vladimir Putin strengthened the case for another peaceful solution with a clear objective to stem the violence in Syria –  a referral to the International Criminal Court (ICC). If Putin’s government is serious about avoiding military intervention and President Obama is serious about punishing perpetrators of atrocity crimes, then the ICC presents a meaningful compromise.

Regardless of where the fault lies, there is little doubt that the use of chemical weapons in an orchestrated massacre of civilians in the Damascus suburbs constitutes a crime against humanity and a war crime, as President Obama noted in his speech to the nation last Tuesday. Like genocide, these two categories of atrocity crimes fall under the jurisdiction of the ICC, a judicial forum tasked with investigating violations of international criminal law.

Since Syria is not a party to the Rome Statute treaty that established the ICC, only the UN Security Council can refer the situation to the Court. With allegations of atrocity crimes committed by actors on both sides of the conflict, this option can accommodate the interests of Russia, China, the United States, the United Kingdom, and France – the five divided, veto-wielding members.

Mr. Putin and his allies in China are well aware that the ICC first investigates atrocity crimes before it decides whether to bring charges. And that it can do so with respect to all sides of a conflict. A UN Commission of Inquiry report released last Wednesday – which again condemns both Assad’s government and the rebels for committing war crimes and crimes against humanity through acts including murder, torture, and rape – should give Russia and China some comfort that justice will not be one-sided. The Court can start by examining these findings, in addition to those of the UN inspectors who visited the site of this massacre in the aftermath of the attacks and released their report yesterday without assigning fault.

As President Putin said in his recent Op-Ed piece in the New York Times, consensus building at the Security Council is essential. So are non-military options. The remarkable thing about Putin’s talk of a non-military solution, however, is that the prospect of an ICC referral has been sitting on his desk since 2011. Yet Russia has rejected attempts by members of the UN Security Council and international community to pass a resolution and threatened to use its veto power. Secretary of State John Kerry should use this bargaining chip in response to Russian Foreign Minister Sergey Lavrov’s attempts to take the military option off the table.

UN High Commissioner for Human Rights Navi Pillay asked the Security Council – as early as August 2011 and as recent as February of this year – to refer Syria to the ICC. And in January, Switzerland led an effort with 57 other countries, including permanent Security Council members France and the United Kingdom, urging the President of the Council to make a referral. According to Human Rights Watch, a total of 64 nations have called for this option, including six current members of the Council.

Russia’s resistance to this approach meant to hold violators of international law to account undermines President Putin’s current campaign to be seen as the good guy focused on diplomatic solutions. It also calls into question his position that the rebels conducted the chemicals weapons attack on August 21.

As we have seen over the past few weeks with President Obama’s threat to use force in this complicated proxy war, non-violent tactics can deter future acts of violence. An ICC referral and possible indictment of perpetrators on both sides of the conflict might also serve as a deterrent. Most importantly, a serious proposal to combat impunity through international justice can stop not only the use of chemical weapons, but also mass atrocity crimes committed without WMDs.

Regrettably, the UN Commission of Inquiry report released last week noted that the perpetrators have no fear of accountability. This is exactly why 120 countries joined together on July 17, 1998 to adopt the treaty that established the International Criminal Court, the culmination of a decades-long experiment in international justice starting with the Nuremberg trials at the end of World War II. They created the Court to deter mass violence against civilians in warfare and to hold accountable those who commit such crimes anyway. Surely, their efforts were not made in vain.

An ICC referral would show Assad and the rebels that they cannot act with impunity. It would restore faith in the role of the UN Security Council, which has been deadlocked throughout Syria’s civil war. And it would add legitimacy to the International Criminal Court at a time when it has remained largely silent in the face of a protracted, documented, horrific civil war. The referral may also facilitate efforts toward a peaceful transition. ICC indictments and arrest warrants issued against key political and military leaders charged with ordering widespread atrocities can marginalize those individuals. Such legal actions can remove these obstructionist actors and the obstacles they pose to the political solutions espoused by President Putin.

The groundwork has already been laid. As some experts note, the current proposal for President Assad to put his chemical weapons arsenal under international control is a complicated, risky process that could take years. Now that Putin is engaging the international community about Russia’s willingness to negotiate a non-military angle and to seek consensus at the UN Security Council, it is time to push him, yet again. A referral of the situation in Syria to the ICC could happen as early as today. So what are we waiting for?

Annie Castellani is an attorney and writer. Previously, she was a fellow at the Public International Law & Policy Group, a global pro bono law firm focused on democratic transitions. Her views are independent from those of the organizations with which she is affiliated.