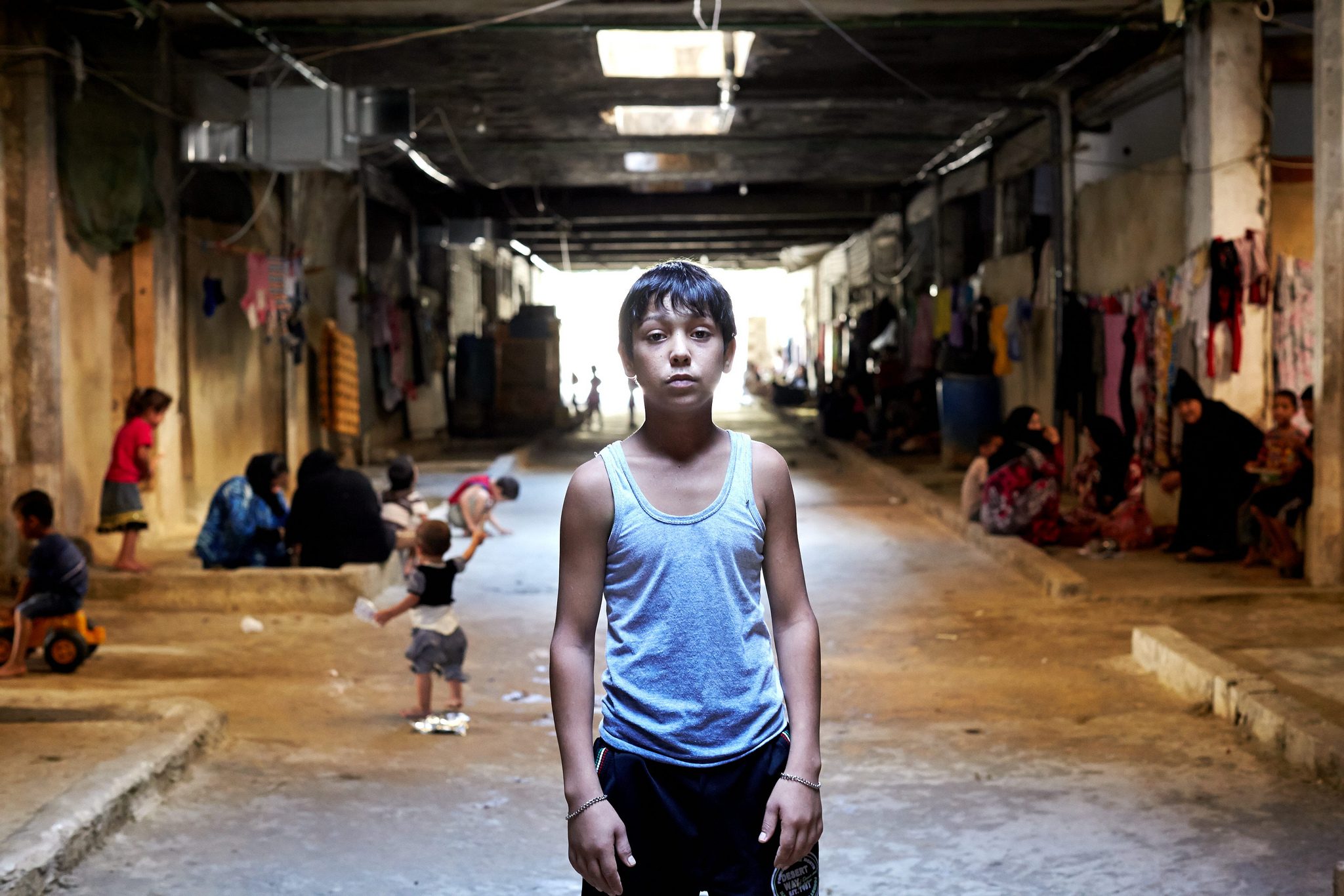 In just five years, Syria has gone from being the world’s second-largest host of refugees to the second-largest producer of them.
By Farrah Hassen | July 22, 2014

While filming a documentary in Syria in the summer of 2003, I visited the Jaramana refugee camp near Damascus. Run by the UN Relief and Works Agency for Palestine, Jaramana at the time housed around 5,000 registered Palestinian refugees from the Arab-Israeli wars of 1948 and 1967 and their descendants.

At Jaramana, rows of decaying homes slightly larger than office cubicles lined newly built roads. The flurry of young children playing tag, teenage boys riding rusty bicycles down the cramped streets, and the commanding shriek of babies injected some color into a landscape otherwise dominated by the grayish hues of stone edifices and smoke emanating from burnt trash. Like a Rembrandt painting, the Damascus sun’s unforgiving rays bounced across concrete walls, casting shadows of uncertainty over the elderly and young Palestinians alike.

Up until that point, I had not comprehended the mix of courage, desperation, and determination demanded by refugees. Neither could I conceptualize the scope of the challenges faced both by humanitarian aid groups struggling to deliver aid to the refugees and the countries struggling to host them.

Eleven years later, Syria—a host country to 540,000 Palestinian refugees and, at its peak in 2007, 1.5 million Iraqi refugees—now faces its own refugee crisis after over three years of bloody civil war.

The number of Syrian refugees and internally displaced persons (IDPs) already rivals the scale of the displaced in countries like Afghanistan and Somalia, which have endured much longer-running conflicts. According to the UN High Commissioner for Refugees (UNHCR), more than 2.8 million refugees have fled Syria for nearby countries, including Jordan, Lebanon, Egypt, and Turkey. 6.5 million remain internally displaced.

With a total population of 22 million, that means that nearly half of the Syrian population has been displaced by war since March 2011. In fact, within a span of five years, Syria has moved from being the world’s second-largest host of refugees to the second-largest producer of them.

If they’re still alive, the Palestinian families I spoke with in Jaramana have had to endure a deluge of bombs, guns, and tanks unleashed by rebel groups and regime forces alike. Or they may have fled their homes, yet again, to a neighboring country. Like their Iraqi counterparts in Syria, they face the reality of becoming double refugees, adding to their heightened insecurity as already displaced people.

Meanwhile, the countries that have absorbed Syria’s refugees are straining at the seams.

Lebanon, for example, which hosts 1 million registered Syrians, has a local population of just over 4 million. Alongside the existing 450,000 Palestinian refugees registered with UNRWA in Lebanon, this means 1 in 4 inhabitants in the country—which is smaller than the U.S. state of Connecticut—is a refugee. Not all will get to stay.

Lebanon’s General Security department forcibly deported 41 Palestinian refugees back to Syria on May 4. Although the refugees had entered Lebanon legally, the Lebanese government claimed that the refugees held forged visas to Libya. Notwithstanding the legitimate burdens facing Lebanon, the deportations run contrary to the international legal principle of non-refoulement as enshrined in Article 33 of the 1951 Refugee Convention, which says that refugees should not be returned to the frontiers of territories where their lives or freedoms are threatened on account of their race, religion, nationality, membership in a particular social group, or political opinion.

The refugee crisis is also fueling social tensions in host countries. Neighboring Jordan, which has also hosted millions of Iraqi and Palestinian refugees over the years, registered 667,700 Syrian refugees in 2013 alone. With a population of nearly 85,000 Syrian refugees, Jordan’s Zaatari camp has emerged as its own sub-community, facing urban challenges akin to cities—including early signs of gentrification and the emergence of a black market.

Some Jordanian business owners and landlords have benefitted from the Syrian influx, but other Jordanians complain that Syrians take their jobs, drain the country’s resources, and drive up the cost of living. It’s an all-too-familiar refrain that Iraqi refugees in Syria and Palestinian refugees in Lebanon have heard before.

Compounding matters for Syria’s refugee women, more than 145,000 of them now run their households alone because their husbands remain in Syria or have lost their lives, according to the UNHCR. As single parents in foreign lands, they face unique challenges finding safe spaces to live, paying rent, providing enough food for their families, and affording medicine. And as the July 2014 UN report “Women Alone” found, “16,000 people living in female-headed refugee households within the host countries Jordan, Lebanon, Iraq, and Egypt have serious medical conditions, and 1,800 are disabled.” Women have also reported experiencing sexual and gender-based violence both in Syria and during their flight to neighboring host countries.

While the U.S. government has publicly called on Syria’s neighbors to keep their borders open to fleeing Syrians, the United States itself only resettled 36 Syrian refugees in 2013, despite being the largest single donor to the Syrian humanitarian response. Along with increasing the number of Syrians it accepts for resettlement, the United States should work with international partners and impacted Middle East states to devise a comprehensive strategy for refugee assistance. This means addressing immediate challenges currently facing refugees, including registration, education, public health, and safety. In the long term, it means finding durable solutions such as voluntary repatriation, local integration, or resettlement to a third country.

Meanwhile, inside Syria, the delivery of humanitarian aid by civil society groups remains stymied by continued heavy fighting and military checkpoints. On July 14, in a rare display of agreement on Syria, the UN Security Council authorized cross-border delivery of humanitarian aid to Syrians in rebel-held areas, in order to bypass government approval. In order to monitor the aid, the Syrian government had barred deliveries outside of Damascus, which meant a significant number of Syrians, including the internally displaced, lacked access to much-needed assistance.

Alongside the over 100,000 Syrians killed in the war so far, the plight of these refugees is as compelling reason as any for renewed international engagement to negotiate an end to the seemingly intractable conflict. But Washington’s response threatens only to escalate the violence.

On June 24, the Obama administration asked Congress to authorize $500 million in direct military training and equipment for Syrian opposition fighters. On paper, this funding seeks to assist “vetted elements” of the Syrian armed opposition to “defend the Syrian people, stabilize areas under opposition control, facilitate the provision of essential services, counter terrorist threats, and promote conditions for a negotiated settlement.”

The vetting methodology was not disclosed, leaving it unclear how the administration would distinguish between so-called “moderates” and Islamist extremists (who, as Juan Cole has pointed out, are likely to secure many of the arms sent by Washington, regardless of who gets them initially). Neither did the administration explain how adding more weapons to an already militarized conflict would hasten its end.

Washington’s current preoccupation with stemming the advance of the Islamic State in Syria and Iraq should not detract from the fundamental issue: only a political solution involving all the parties in the conflict—including the Assad regime, Iran, Russia, and the United States—can bring this war, which has killed and displaced so many, to an end. Two rounds of Syrian peace talks in Geneva failed to bear fruit in part because of the U.S. insistence that Iran not get a seat at the table.

As Paulo Sérgio Pinheiro, Chair of the UN Human Rights Council’s Commission of Inquiry on Syria, concluded: “A negotiated political solution, which the commission has consistently held to be the only solution to this conflict, must be pursued with the renewed vigor both by the parties and by influential States.”

At the crux of the political divide between fractured opposition and pro-regime groups is the lack of consensus on what a post-war Syria should look like. Will power be decentralized? After the countless lives lost, does Assad have any place in an interim coalition government? Do the Islamists?

The Geneva talks may not have answered these vexing questions, but the duration of the conflict only empowers Assad.

Against beyond bleak circumstances, Syrians have still found ways to return a tiny semblance of normalcy to refugee camps across the region, such as opening their own food stands, hair salons, and dress shops. Being industrious is a trait Syrians have always taken great pride in.

But these fleeting sources of normalcy are at best a palliative fix, for there is nothing normal or comfortable about the refugee life.

The poor prospects for any immediate political resolution to the Syrian civil war pose important challenges for host countries, the UNHCR, and humanitarian aid groups alike. With limited resources and traumatized populations, how can they design more comfortable and functional spaces for displaced people? How can they avoid re-victimizing people fleeing conflict and persecution? Can they find more durable solutions that will allow refugees to rebuild their lives with dignity?

Meanwhile, although Syria’s refugees have lost loved ones, homes, and possessions, many—like the rest of the world’s over 50 million forcibly displaced people—see themselves as survivors, not victims. As a 24-year old Syrian woman in the Domiz refugee camp in the Kurdistan Region of Iraq told photographer Brian Sokol, who has been documenting Syrian refugees, the most important thing she brought from home “is my soul—nothing more, nothing material.”

Farrah Hassen, the 2008-2009 Newman Fellow at the Institute for Policy Studies, is a freelance writer and filmmaker based in Washington, D.C.