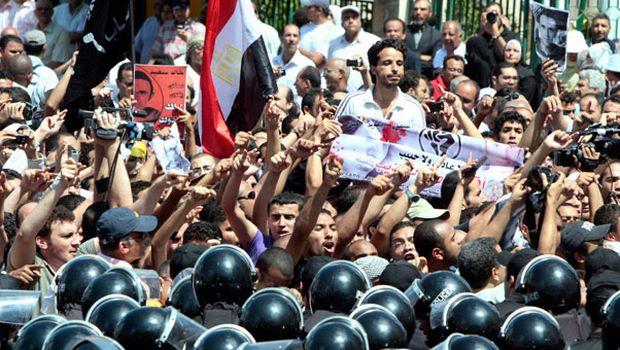 Ever day U.S. soldiers risk and lose their lives ostensibly for the cause of Middle Eastern democracy, so why isn't Washington more firmly supportive of democracy in Egypt?
By Abena Ampofoa Asare | February 2, 2011 The Egyptian people have decided that they are no longer willing to wait for President Hosni Mubarak to expire in order to taste freedom. The lesson from Egypt this week, Tunisia last week, and perhaps Yemen or Algeria next week is that U.S. bombs bursting over Baghdad are not the only possible response to state repression in the Middle East and North Africa.

Contrary to recent images from Iraq and Afghanistan, this is what democratic regime change looks like in the so-called Arab world. Here is a queue of men with heads bowed before a row of brightly-colored prayer mats completely encircled by police in riot gear. Here is a youth wearing a home-made “Down with Mubarak” T-shirt marked with both the Christian cross and the Muslim crescent. And here are hundreds of thousands of women and men gathered together in Tahrir square in Cairo as the national army vows not to use force against its fellow citizens.

In the past week, the Obama administration had been struggling to walk a fine line between its long alliance with Hosni Mubarak and the Egyptian people’s democratic desires. From Secretary of State Clinton’s belated calls for reform and Vice President Biden’s dubious assertion that Hosni Mubarak is not a dictator to President Obama’s threats to “review” U.S. aid to Egypt, the current administration has been hesitant to embrace the wave of popular movements spreading from North Africa to the Middle East.

This is ironic given that every day American soldiers risk and lose their lives ostensibly for the cause of Middle Eastern democracy. Thousands of Iraqi and Afghani men, women, and children have been the “collateral damage” of a war waged in the name of freedom. The U.S. government’s avowed commitment to democracy in the Middle East is written in the blood of soldiers and citizens.

Eight hundred miles away from Baghdad, the Egyptian people are standing firm in unequivocally asserting their democratic rights. Unarmed men and women are risking their lives to remove a leader who has proved unable or unwilling to remain accountable to the Egyptian people over the past 30 years—and who happens to be a key U.S. ally.

For far too long in Washington, Hosni Mubarak’s promises to deliver stability as a bulwark against “Islamic extremism” have covered over a multitude of sins. As a patron to the Mubarak government to the tune of two billion a year, the United States is duty-bound to condemn the Egyptian state’s violence against its people and should have done so immediately. However, the Obama administration’s urgent demands for reform came only after Egyptians, numbering in the millions, took to the Cairo streets demanding fair elections, accountability, and economic opportunity.

Democratization, when it arises from popular desire and determination, is by definition unpredictable. If the people’s needs, vision, and voice are to be central to governance, they must also be the catalysts for the regime change. The process, as Egypt has shown, is important; functioning and vibrant democracies in the Middle East cannot be cooked up in Washington or negotiated between small groups of elites. They certainly cannot be blasted into place with smart bombs and Black Hawks. Democracy begins with the people’s decision to steer their country in a new direction.

When Mubarak follows his wife and children and leaves Egypt, questions about the U.S. government’s moral credibility will remain, not only because of the past 30 years of a crooked alliance but also because of the past week’s triangulations. We have all heard the U.S. government beating the war drum of democracy for the past decade, and now, in the face of a national movement actually driven by the population, we cannot help but recognize the limitations of Washington’s version of regime change.

The lesson of Tunis, Sanaa, and Cairo is that democracy rhetoric is more than a strategy for the assertion of American dominance. On the contrary, it is a language that fuses moral and political power into a radical claim that every human being deserves a voice in the decisions that affect their daily lives. The United States tried to promote democracy through the barrel of a gun. It’s time now for Washington to support democracy in the Middle East by pressing its authoritarian allies to put their guns away.