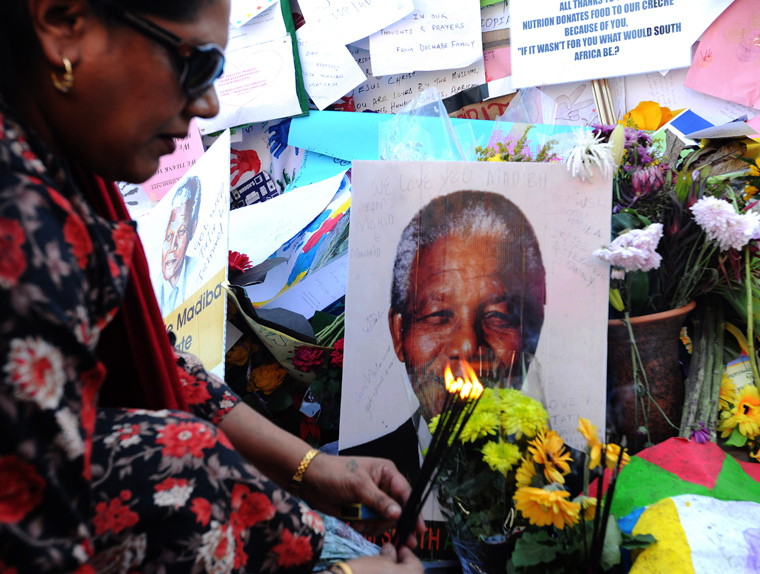 A tribute to Nelson Mandela from San Francisco's East Bay, birthplace of the U.S. anti-apartheid movement.
By Conn Hallinan | December 6, 2013

One thing alone I charge you. As you live, believe in life. Always human beings will live and progress to greater, broader, and fuller life. The only possible death is to lose belief in this truth simply because the great end comes slowly, because time is long.

— W.E.B. DuBois, historian, activist, founder of the Niagara Movement, and author of the The Souls of Black Folk.

Those words are taped on my desk next to James Baldwin’s searing quote from The Fire Next Time: “A civilization is not destroyed by wicked people; it is not necessary that they be wicked but only that they be spineless.” Nelson Mandela, the great clarion of African freedom, whose history was the very embodiment of courage, above all else believed in life. And like DuBois and Baldwin, he understood perseverance.

With the news that Mandela’s breath had begun to fail him—his lungs were savaged by the tuberculosis he acquired during his 27 years of imprisonment in South Africa—two memories came to mind.

In the spring of 1961, I stood in a vast crowd of people in London’s Trafalgar Square to hear a stream of speakers denounce apartheid, a term I had never before encountered. In part my ignorance was because I was an 18-year-old fresh out of high school, where I had majored mainly in football and beer, but also because I was an American, and the word was simply not on my political radar screen. A few of us knew about the Sharpeville massacre the previous year, when South African police had murdered 69 peaceful demonstrators, but “apartheid” was as yet an exotic vocabulary word for me.

When I returned home to San Francisco to start college, a few of us tried to get some traction on the issue. The UN had called for an international boycott in 1962, but it had been almost completely ignored by the West. Even Britain’s supposed anti-apartheid Labor government rejected joining the UN boycott. It’s hard to get Americans to look beyond their shores unless a lot of body bags are coming home. In any case, most of us were swept up in the civil rights movement, the free speech movement, and then the fight to end the war in Southeast Asia. The anti-apartheid movement went on the back burner.

It was not that Americans were unaware of apartheid—even though I doubt that a lot people, even in the civil rights movement, could have given the definition of the Afrikaner word: “the state of being apart”—it was that no one quite knew what to do about it. Until the anti-apartheid movement came up with the idea of divesting in companies that did business with the Pretoria regime, it seemed a bridge too far.

But starting in the 1970s that began to change and, without belittling any other area of the country, Oakland and Berkeley led the way. As the singer and activist Harry Belafonte said, San Francisco’s East Bay was “The birthplace of the U.S. anti-apartheid movement.”

But it was a long, slow slog.

In 1972 Berkeley Congressman Ron Dellums (D-CA) introduced the “Comprehensive Anti-Apartheid Act,” which ended up dead on arrival in Washington. The following year Berkeley Mayor Lonnie Hancock tried to get the city to divest from companies investing in South Africa, but the effort failed. It took six years of repeated efforts to get Berkeley to divest. When it finally did, it became one of the first communities in the nation to do so.

The turning point in the fight against apartheid came in 1984, when students and faculty at the University of California campus in Berkeley demanded that the biggest university in the world divest its billions of dollars of investments in companies that did business with South Africa. At the time I was a reporter, who wished them well, but had no great hopes of success. I kept thinking of a line from a poem by Irish revolutionary Padraic Pearse about those who had gone out “to break their strength and die, they and few, in bloody protest for a glorious thing. They shall be spoken of among their people. The generations shall remember them, and called them blessed.”

How wrong I was. Memories of the past can sometimes blind us to the potential for the future.

The students built shantytowns on campus, besieged the board of regents, and took over historic Sproul Plaza for six weeks. The University responded in typical fashion: tear gas, arrests, expulsions, and stonewalling, which was like trying to douse a fire with gasoline. Civil rights groups and trade unionists joined the demonstrations, along with people throughout the Bay Area. The university soon found itself at war with the whole East Bay.

The pressure was just too much, even for the powerful and wealthy board of regents. In 1986, the university withdrew $3 billion from companies doing business with South Africa, dwarfing modest divestment decisions by universities like Harvard. Dellums re-introduced the divestment legislation, and in 1986 the U.S. Congress passed it. It was the death knell for apartheid.

Mandela remained in prison until 1990, when it became clear to the South African government that it could no longer withstand the international pressure to release him and terminate the system that had enchained a people for over 40 years. While apartheid was officially ended in 1990, it was not until Mandela was elected president in 1994 that it was finally buried.

And that leads to the second memory.

On July 1, 1990, Mandela came to the Oakland Coliseum and told 58,000 people, “It is clear beyond any reasonable doubt that the unbanning of our organization [the African National Congress] came as a result of the pressure exerted on the apartheid regime by yourselves.” He thanked the crowd and held his fist in the air. No, Berkeley students, faculty, civil rights organizations, residents, and trade unionists did not bring down apartheid by themselves, but because they persevered and had spine, they helped start an avalanche.

It is sometimes hard to remember these lessons because DuBois was right: ends come slowly and history is long. But in the end it is those who fill the plazas, who chain themselves to doors, who shrug aside tear gas and billy clubs—who persevere in the face of prison, exile, even death—to whom history’s laurels go.

We shall miss this dear man who loved freedom and humanity so much that, no matter what was done to him, he would not break. He set the bar high. We honor him by clearing it.

Foreign Policy In Focus columnist Conn Hallinan can be read at dispatchesfromtheedge.wordpress.com.