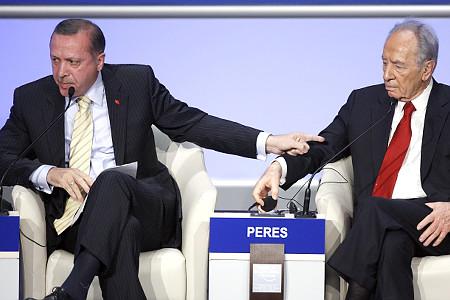 Resolving longstanding disputes between Muslims and non-Muslims requires an understanding of the different cultural approaches to conflict resolution.
By Doron Pely | January 20, 2012

Western countries are embroiled in armed conflicts with Muslims, Arab nations, and non-state Arab and Muslim groups. To manage or resolve these ongoing disputes, Western disputants — including Israelis, who define themselves as Western — should become familiar with the ways Muslims and Arabs customarily manage and resolve disputes. Failure to understand these cultural differences will prolong or exacerbate ongoing conflicts.

The ongoing dispute between Israel and Turkey is a good example of the Muslim-Western dispute resolution gap. The dispute is a result of clashes between Israeli commandos and Turkish citizens when Israeli commandos tried to board the vessel MV Marmara in the Eastern Mediterranean in late May 2010 to stop the Turkish ship’s attempt to breach the Israeli-imposed sea-blockade on the Gaza strip. The ensuing struggle left nine Turks dead and dozens injured, as well as several wounded Israeli soldiers.

From a Muslim perspective, the picture of this dispute is clear. All the dead and most of the injured were Turks. The other party to the dispute was the Israeli military. The victims in this dispute are, therefore, the Turks, and the perpetrators are the Israelis (the other side). According to Muslim and Arab customary justice rules, for a conflict to start moving towards resolution, it must have a clearly defined victim side and a clearly defined perpetrator side. Customary practice in the West, by contrast, seeks to avoid the assignment of blame and instead focuses on identifying common goals and the achievement of win-win resolution.

Furthermore, from a Turkish (and Muslim) perspective, the only way to get this dispute “unstuck” and start moving toward management or resolution is for the Israelis (identified as the offending side in this conflict) to acknowledge culpability, accept their role as perpetrators, and apologize for the killing and wounding of the Turkish citizens. The act of apology has of functional as well as symbolic significance, since the victims can finally witness the acknowledgment of their victimhood and the partial restoration of their severely damaged sense of honor. As a result, they can then demonstrate magnanimity, accept the apology, and subscribe to the reconciliation option of this dispute. Without the apology, there will be no movement towards reconciliation.

Israel’s refusal to apologize stems from an incorrect assessment that an apology demeans or damages the honor of the apologizing party. Apologizing, for the Israelis, would mean foregoing acknowledgment of the wrongs they feel were done them by the people on board the MV Marmara. The Israelis, with their Western mindset, see the way forward in a mutual acknowledgment of some vague wrongdoing. This is the crux of the cultural quagmire that prevents initial movement toward possible resolution of this conflict.

Another illustration of the proper place of an apology in Muslim culture can be seen in the aftermath of an attack by a Jordanian soldier on a group of Israeli schoolgirls on a daytrip to the Israeli-Jordanian border, on March 13, 1997. The attack left seven girls dead and many others wounded. The late King Hussein of Jordan travelled to Israel three days later. There he visited the homes of the dead girls, knelt in front of their parents, and apologized on behalf of Jordan for the deeds of the Jordanian soldier. The Jordanian government followed through with a significant reparation offer. From King Hussein’s perspective, apologizing was the exact opposite of a self-demeaning act; it was a necessary, honor-restoring step required to start the forgiveness and reconciliation process.

The West must recognize several aspects of dispute and dispute resolution unique to Islam in order to move toward resolving conflicts with Muslims. The most important of these aspects are honor, revenge, and forgiveness.

In the West, honor has been largely relegated to an emotive, folkloristic place in both disputes and their resolution. In the Muslim world, on the other hand, honor is a core concept, around which conflicts start, are managed, and get resolved. Western practitioners often fail to grasp the true importance of honor and consequently ignore its vital place in Muslim peacemaking. Honor, in conflicts involving Muslims or Arabs, often surpasses core Western basic needs such as survival, health, and safety. Furthermore, honor in the Muslim’s conflict context is not a ritualistic anachronism but a tangible, utilitarian, and deeply emotive aspect of life. In simple words: damage to honor is a major cause for the eruption of conflicts, and without restoration of lost or damaged honor, movement toward resolution of a conflict will be stymied.

Revenge and forgiveness are two additional core concepts central to Muslim dispute resolution. In Islam, revenge and forgiveness are seen as organic, naturally occurring human behaviors that are perfectly acceptable, understandable, and hardly shameful or primitive. These concepts are deeply rooted in both religious and pragmatic traditions. The core of Muslim dispute resolution practices revolves around the axis of a strong religious, cultural and practical incentive to avenge (and create a significant deterrence in the process). According to the Qur’an, God (Allah) richly rewards those who find within themselves the strength to forgive: “The recompense of an injury is an injury the like thereof; but whoever forgives and thereby brings about a reestablishment of harmony, his reward is with God; and God loves not the wrongdoers” (Qur’an: 42:40). Many Muslim disputes are resolved, therefore, only when the victim’s side undergoes a transformation from a desire to avenge to a willingness to forgive. Cultural practices, such as the ubiquitous Sulha dispute resolution tradition provide the practical and ritualistic vehicle for such a transformation.

Westerners tend to consider revenge “primitive” and see forgiveness as the “cure” to the social ill of revenge. As Michael E. McCullough writes in his book Beyond Revenge: “the orthodox view of revenge in Western society” is that “revenge is an infection that invades a vulnerable host…releases a toxin that poisons the host morally, physically and psychologically, and then wreaks destructive effects on the avenger and the objects of his or her vengeance…”.

In contrast, Muslim conflicts, often revolving as we have seen earlier, around the victim-perpetrator pairing, traditionally expect the “victim’s” side to seek revenge to restore its lost honor and to re-establish the balance of power. The “perpetrator’s” side is traditionally expected to sue for reconciliation, since it stands to suffer the wrath of the offended victims; because its honor has not been damaged as much as that of the victim’s side, it can afford to sue for reconciliation. The more prevalent Western concept of stressing the hurt suffered by both sides, and minimizing or avoiding the identification of either side as the offender, is a problematic scenario in Islam, since it does not create the initial conditions necessary to start the reconciliation process.

Direct, face-to-face negotiations between disputants are a difficult proposition in Islam (where they do take place, there are usually external pressures to do so). The reason for Muslim reluctance is twofold: The separation helps the victim’s side preserve and possibly enhance what is left of its honor – since it is not exposed to potential pressure or even further humiliation by a sometimes stronger disputant. Equally important, the separation removes the possibility that the victim’s side might view a direct meeting with the offenders as an opportunity to exact revenge. Therefore, victims and perpetrators do not meet until their dispute is resolved, and then only under strictly regulated conditions. During the dispute-resolving ritual, the victim’s side has the opportunity to officially and publically forgive, make the terms of the reconciliation agreement public, restore its honor, and launch the moving-on stage of the dispute. In the West, on the other hand, conflict is looked at as a growth opportunity, and direct negotiations are considered the best way for both sides to communicate, convey their hurt and pain to each other, and ultimately craft a joint win-win compromise.

In this context, it is worth mentioning the role of the Saudi Arabian government as a traditional third-party intervener between disputants in the Arab and Muslim world. One such example is the 1989 Taif Agreement, a pact that formalized the revised balance of power between the warring parties in Lebanon’s bloody civil war. A more recent example can be seen in reports that the Pakistani Taliban were seeking Saudi intervention as a mediator in their conflict with Pakistan.

A telling example of the Muslim-Western dispute resolution gap is the eternally-faltering Palestinian-Israeli negotiation process. Here, too, we see an abyss between the perceptions of the sides regarding the most basic elements of dispute resolution. As mentioned above, a Muslim dispute always includes a victim side and a perpetrator side. In the Palestinian-Israeli dispute, both sides perceive themselves (both internally and publically) as the victims. As a result, no side identifies as perpetrator. This formula virtually guarantees intractability and does not contain the necessary emotional and cultural ingredients necessary to get the process moving forward from the Arab/Muslim point of view.

Also, the Israelis insist on direct negotiations with the Palestinians. The Palestinians, on the other hand, continuously try to induce the introduction of a powerful third party intervener (often the U.S. president) between them and the Israelis. Such a presence will enable the intervener to reframe the messages of the two sides to modify or remove potentially damaging narratives, and thus maximize the potential for the creation of a constructive atmosphere that will facilitate forward momentum. A powerful third party intervener can also help both parties make concessions they cannot be seen to make directly to each other, while claiming that they made the concession under severe pressure from the third party intervener, ostensibly to avoid shaming the intervener by turning down his appeal for collaboration and flexibility. Also, the perceived power differential between the two sides to this dispute, and the overwhelming sense of victimhood on the part of the Palestinians (as well as the Israelis) virtually precludes the possibility of successful direct negotiations. The Palestinians occasionally participate in this ritual, and that under relentless Western pressure, but little, if any, real progress has been made so far.

It is important to remember that concluding the Egyptian-Israeli peace agreement required the intervention of a powerful third party mediator/arbitrator, President Jimmy Carter. President Carter shuttled between the two parties in Camp David, coaxing and occasionally coercing them toward an agreement. Without Carter’s active intervention, achieving an agreement would have been unlikely.

Of course, many of the root causes of conflicts are similar in the West and in Muslim/Arab cultures. People reacting to a perceived economic, territorial, or cultural wrong done to them personally or to the people or institutions they identify with, be they family, clan, tribe, nation, or co-religionists. “Pragmatists” (English for those coached in and familiar with interest-based Western dispute resolution approaches) tell us that substance is king. They argue that once the disputants agree on substance, the rest falls into place. Those more familiar with Muslim cultures in general and with Muslim dispute resolution in particular, argue that honor, identity, victimhood and forgiveness are equally essential elements, and that until and unless these cross-cultural dispute resolution gaps between Muslim and Westerners are bridged, meaningful, constructive exploration of the substantive issues will not likely occur.

Doron PelyDoron Pely is a contributor to Foreign Policy In Focus, a PhD candidate at Kings College London, and the executive director of the Sulha Research Center in Shefar’am Israel. His research focuses on Muslim dispute resolution.