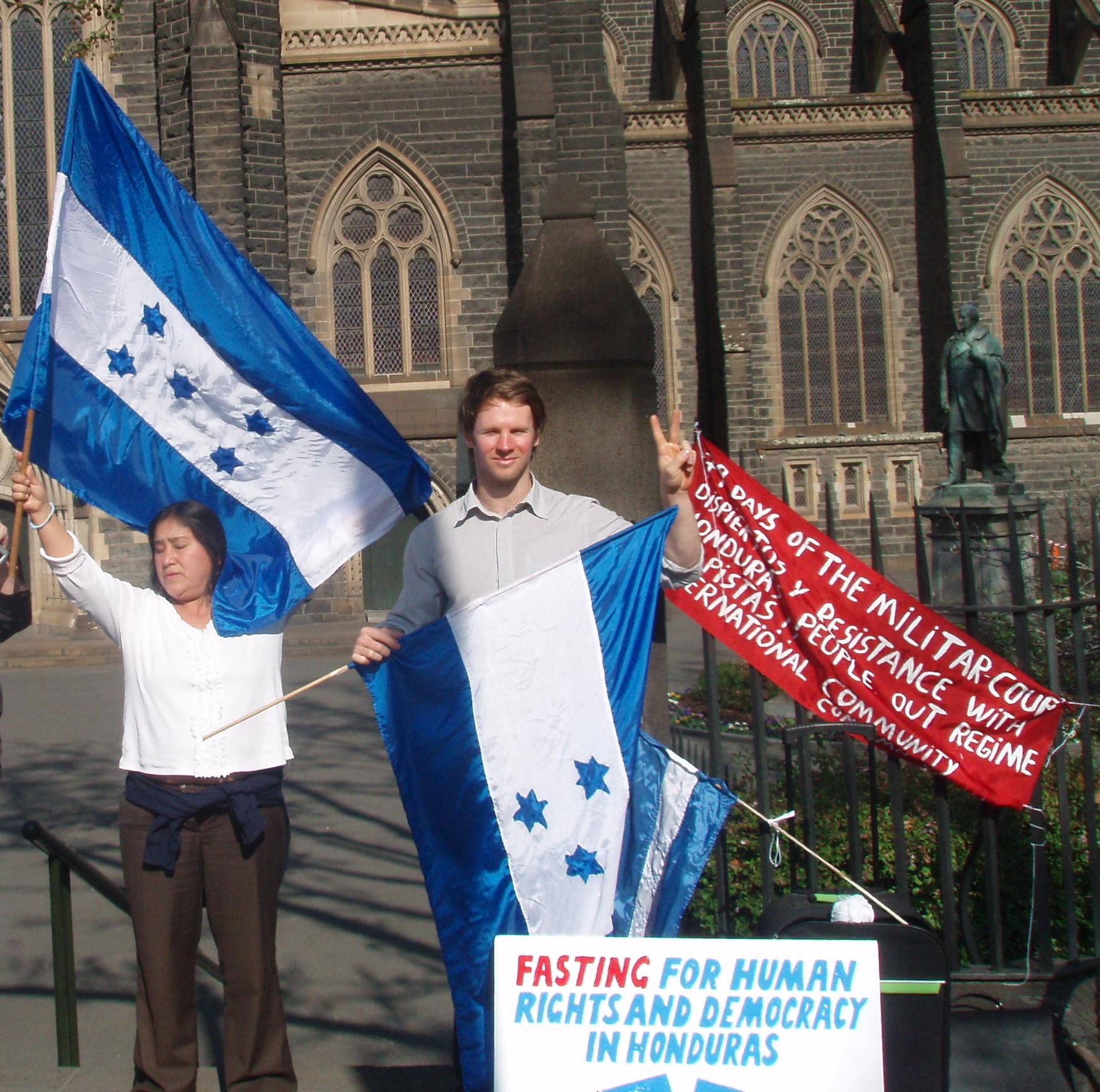 Responding to the Honduran Coup

Activists, both in and out of Honduras, continue to work for justice.
By Rosie Wong | March 16, 2010 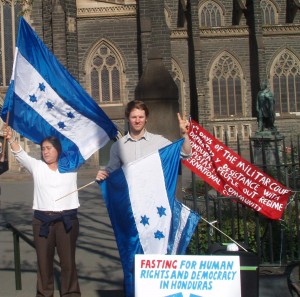 As a 30-year-old Australian who had previously travelled to Guatemala and El Salvador, I decided to respond to an email listserv request for international observers in Honduras after the June 2009 coup.

I felt compelled to go to the country after reading about U.S.-backed repression and massacres in the region in the 1980s. There were clear parallels between that period and the current situation in Honduras. To date, Honduras has seen the assassination of around 150 members of the nonviolent resistance, thousands of illegal detentions, and hundreds of beatings and injuries, as well as violent illegal closures of alternative media, 10 reported cases of rape, and dozens of sedition charges against protesters. I thought that a larger international presence could only be positive and hoped that the accompaniment process would increase the safety of Honduran activists, even if only by a little.

Though I arrived in Honduras during a period of relative calm, there were constant signs that the situation could erupt at any moment.

My driver from the airport, a member of the resistance, pointed out that the helicopters overhead were deployed to frighten protesters. A friend called and told him that he received a death threat on Facebook. Ubiquitous anti-coup messages were being painted over on a daily basis. A journalist I met at the supermarket told me that Honduras was in “big trouble,” and needed an election to make things better.

After arriving in Honduras on September 1, I was told about the idea of organizing a fast by activists around the world in order to draw attention to the Honduran crisis. I began to help put together a contact list of solidarity groups, and the fast began two weeks later.

By the end, in the final days of 2009, over 498 people from at least 26 countries participated in some form of fasting, some on a one-off basis and others more regularly. I myself did a liquids-only fast for one day a week during the whole period. The idea, of course, was that fasters would tell people around them why they were doing it; some people, in fact, demonstrated while fasting.

In the Honduran capital Tegucigalpa, the major gathering point was a fasting tent that maintained a daily presence in the city’s Central Park. All kinds of people came and went, signed off for a fasting period, and in some cases stayed for hours, reciting poetry, chatting, and debating.

Though initially the local authorities granted us permission to have our tent, on the second day we were asked to drop references to the resistance front. Soon the authorities decided that we weren’t allowed to have a tent at all.

After Zelaya returned to the country a week after the launch of the fast, the regime responded with a stage of siege. As a result, it became too dangerous for us to have a permanent presence in the park. At the local level, there was widespread popular support for the fast, which needed our physical presence in the park to keep it going.

Trying to facilitate international solidarity from inside Honduras was quite difficult. Many groups simply did not reply to emails. It was often necessary to call people, an impossibility given that we had raised only around $20 in donations. As a result, all of our expenses were out-of-pocket.

We also had to deal with frequent internet outages, which impeded us from telling the world that the whole country was under house detention and that the government had detained hundreds of people in baseball stadiums. During humanitarian crises, many activists around the world tend to wonder what they can do from so far away. In our case, we were so close and yet we felt completely helpless.

The idea of fasting itself had both advantages and drawbacks as an organizing technique. While some individuals who may not get involved in actions like rallies readily took to the idea of fasting, others had reservations about its efficacy. Some felt that fasting failed to directly target those who were committing the atrocities.

Criticisms aside, there were amazing solidarity efforts in several parts of the world.

In El Salvador there were two public fasting events, one by a committed group of Hondurans in September and a larger event in early October in San Salvador, attended by hundreds of people over several days. Other events included a small demonstration in India and a chain-fasting group in Boston. Forty nuns in Canada fasted, as did nine from the Comunidad de la Luz in Uruguay. Many people around the world also participated on an individual basis.

Our fasting in Tegucigalpa received a lot of coverage in the local alternative media, including radio stations and email lists. The pan-Latin American channel Telesur came to interview fasters, as did other alternative TV stations. Regrettably, outside of Latin America, the fasts drew significantly less coverage.

Back home in Sydney we continue to try to work in solidarity with Honduras, but it isn’t easy. It’s not just that there is a lot of apathy; a lot of issues other than Honduras compete for crowds and attention.

Furthermore, little of the Honduran reality makes it into the local media, and the Honduras-related stories that do appear tend to misinform rather than educate. As a result, many people mistakenly believe that there’s now peace in the country, or that Venezuelan president Hugo Chavez is more important to the story than the illegality of the coup and the suffering of the Honduran people.

While we have failed to gain significant traction with the often-fragmented Australian public, Hondurans, in contrast, have put up a more unified front. Since the coup, they’ve had a daily presence in the streets, a truly broad-based movement: Different political party members, social organizations, women’s groups, students’ groups, GLTBI groups, campesinos, lawyers, and many others are all marching together, working toward common goals.

There were at least 80 people in Honduras who told us by email that they were participating in some form of fasting, and many more had signed a journal to note their participation.

“To fast for a cause that is so just feeds your spirit,” wrote one faster recently. His message also provided a painful reminder about Walter, a human rights defender who fasted with us. He helped obtain the release of political prisoners, take part in the marches, document human rights abuses, organise the GLBTI movement, publish reports about the repression the GLBTI community has faced, and educate and distribute condoms to sex workers. On 13 December, after having been persecuted for some time, Walter was shot dead as he walked home from distributing condoms. He was 27.

Still, there are signs of hope. On January 27, 2010, at least 300,000 people marched in Tegucigalpa — and a total of 1 million marched in different cities around Honduras — in support of former President Manuel Zelaya, who left Honduras for exile in the Dominican Republic. The military prevented busloads more from joining.

Protesters also marched to reject the fraudulent elections that brought Pepe Lobo to power as the new president, as well as the ongoing repression and persecution, the militarization of Honduran society, and the killing of anti-coup activists. Three such activists were killed in February.

While mass-media attempts to sell us stories about how the situation is better, Honduran activists continue to struggle. In addition to holding at least one major march every month, Hondurans are working hard to organize their communities for a National Constituent Assembly — a people’s project that was supported by Zelaya. In fact, a non-binding referendum to begin this process was scheduled for the date of the coup in 2009.

On June 28, the one-year anniversary of the coup, the Honduran resistance plans to hold a people’s referendum. This will be an international date of solidarity with the Honduran people. By our actions, we can send a loud and clear message that they aren’t alone, and that we support their efforts to rewrite the country’s constitution and stop human rights abuses.

Rosie WongRosie Wong is an independent volunteer activist for Honduras based in Sydney and a contributor to Foreign Policy in Focus. She can be contacted on latinamerica.emergency@gmail.com and maintains a website: http://www.sydney-says-no2honduras-coup.net