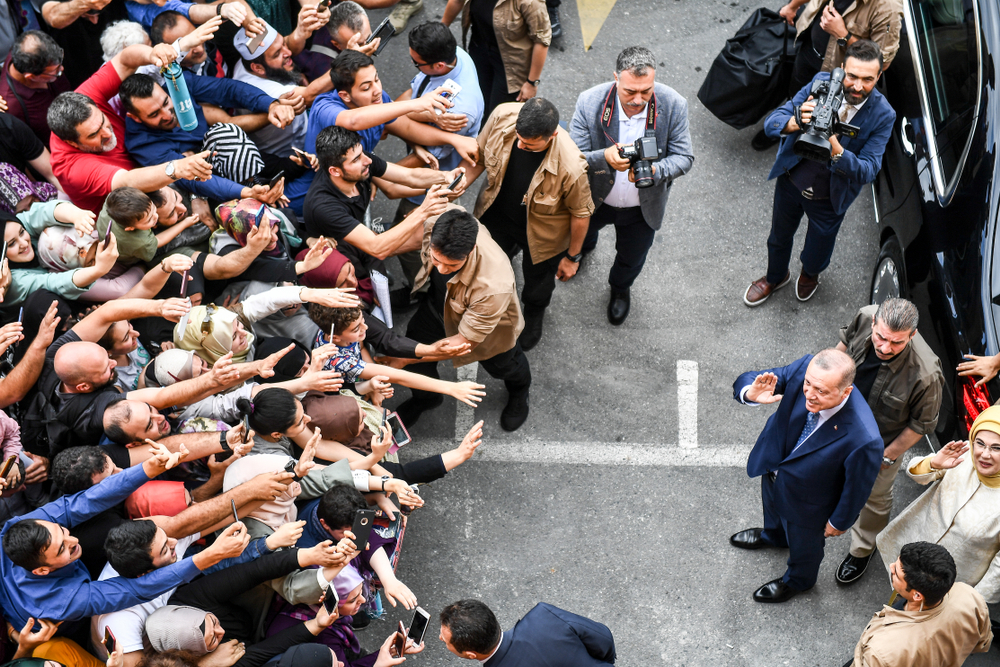 “Revenge of the Kurds”: Erdogan’s Missteps Are Piling Up

After 18 years of unchallenged power, the Turkish president finds himself in the middle of several domestic and foreign crises of his own making.
By Conn Hallinan | April 25, 2019

After 18 years of unchallenged power and success, Turkish President Recep Tayyip Erdogan suddenly finds himself in the middle of several domestic and foreign crises with no obvious way out. It’s unfamiliar ground for a master politician who’s moved nimbly from the margins of power to becoming the undisputed leader of the largest economy in the Middle East.

Erdogan’s problems are largely of his own making: an economy built on a deeply corrupt construction industry, a disastrous intervention in Syria, and a declaration of war on Turkey’s Kurdish population. All of these initiatives have backfired badly.

In the March 31 local elections, Erdogan’s conservative Justice and Development Party (AKP) lost control of all of Turkey’s major cities, including the country’s political center, Ankara, and the nation’s economic engine, Istanbul. The latter contributes more than 30 percent of Turkey’s GNP.

Revenge of the Kurds

That’s not to say that the man is down and out. The AKP is demanding a re-run of the Istanbul election and is preventing the progressive mayors of several Kurdish cities in Turkey’s southeast from assuming office.

Erdogan isn’t a man who shies from using brute force and intimidation to get his way. Close to 10,000 of his political opponents are in prison, hundreds of thousands of others have been dismissed from their jobs, and opposition media is largely crushed. The final outcome of the election is by no means settled.

But force will only exacerbate Erdogan’s problems.

The Kurds are a case in point. When the leftist, Kurdish-based People’s Democratic Party (HDP) made a major electoral breakthrough in 2015 — winning 81 seats in the Parliament and denying the AKP a majority — Erdogan responded by ending peace talks with the Kurds and occupying Kurdish towns and cities.

Rather than cowing the Kurds, however, it sowed the wind, and the AKP reaped the hurricane in the March election. An analysis of the Istanbul mayor’s race shows that the AKP and its right-wing National Movement Party alliance won about the same percentage of votes it had in last year’s presidential election. The same was true for the AKP’s opposition — the secular Republican People’s Party (CHP) and its ally, the right-wing Good Party.

The difference was that the HDP didn’t field a candidate, and its imprisoned leader, Selahattin Demirtas, urged the Kurds and their supporters to vote against Erdogan’s candidate. They did so in droves and tipped the balance to the CHP’s candidate. That pattern pretty much held for the rest of the country and accounts for the AKP’s loss of other cities, like Izmar, Antalya, Mersin, and Adana.

When the Turkish state waged a war against the Kurds in the 1980s and ‘90s, many fled rural areas to take up life in the cities. Istanbul is now about 11 percent Kurdish. Indeed, it is the largest grouping of urban Kurds in the world. So if there is a phrase that sums up the election, it might be “revenge of the Kurds.”

But the AKP’s loss of the major urban centers is more than a political setback. Cities are the motors for the Turkish economy, and for the past 18 years Erdogan has doled out huge construction projects to AKP-friendly firms, which in turn kick money back to the party. The president has delivered growth over the years, but it was growth built on the three “Cs”: credit, corruption and cronyism.

Those chickens have finally come home to roost. Foreign currency reserves are low, Turkey’s lira has plummeted in value, debts are out of hand, and unemployment — particularly among the young and well educated — is rising. In a rare case of political tone deafness, Erdogan focused the recent campaign around the issues of terrorism and the Kurds, ignoring polls that showed most Turks were far more worried about high prices and joblessness.

Where Erdogan goes from here is not clear. Turkey is holding talks with the International Monetary Fund (IMF) about a possible bailout, but the president knows that means increased taxes and austerity — not exactly the kind of program that delivers votes.

There will be no elections until the 2023 presidential contest, so there’s time to try to turn things around — but how? Foreign investors are wary of Turkey’s political volatility, and the Europeans and Americans are unhappy with Erdogan’s erratic foreign policy.

The latest dustup is fallout from Turkey’s disastrous 2011 decision to support the overthrow of President Bashar al-Assad of Syria. Assad has survived — largely because of Russian and Iranian support — and now Turkey is hosting millions of refugees and bleeding out billions of dollars occupying parts of northern Syria.

Turkey initially tried to get NATO to challenge Moscow in Syria — even shooting down a Russian warplane — but NATO wanted no part of it. So Erdogan shifted and cut a deal with Moscow, part of which involved buying the Russians’ new S-400 anti-missile and aircraft system for $2.5 billion.

Backing the extremists trying to overthrow Assad was never a good hand, but Erdogan has played it rather badly.

The U.S. Congress is threatening to block Turkey’s purchase of the F-35 fifth generation fighter plane, even though Turkey is an investor in the project. The Trump administration has also warned Ankara that it will apply the 2017 Countering America’s Adversaries Through Sanctions Act if Turkey buys Russian military equipment, sanctions that could damage Ankara’s already troubled economy. Turkey is officially in a recession.

The Americans are so upset about this S-400 business that the Senate recently proposed lifting an arms embargo on Cyprus and signing energy agreements with Greece and Egypt — two of Turkey’s major regional rivals.

(Of course, not being able to purchase the F-35 may end up being a plus for Ankara. The plane is an overpriced lemon. Some of Erdogan’s advisors argue that Ankara could always turn to Russia for a fifth generation warplane — and one that might actually work.)

There is some talk about throwing Turkey out of NATO, but that’s mostly bluff. The simple fact is that NATO needs Turkey more than Turkey needs NATO. Ankara controls access to the Black Sea, where NATO has deployed several missile-firing surface ships. Russia’s largest naval base is on the Crimean Peninsula and relations between Moscow and NATO are tense.

A strategic turn toward Moscow seems unlikely. The Russians oppose Turkey’s hostility toward the Kurds in Syria, don’t share Erdogan’s antagonism toward Egypt, Israel, and Saudi Arabia, and have differences with Ankara over Cyprus and the Caucasus. And for all the talk about increasing trade between the two countries, the Russian economy is not all that much larger than Turkey’s and is currently straining under NATO-applied sanctions.

On the one hand, Ankara is angry with Washington for its refusal to extradite Fethullah Gulen, a Muslim leader that Erdogan claims was behind the failed 2016 coup. On the other hand, the Turkish president also knows that the U.S. pretty much controls the IMF and he will need American support if he goes for a bailout.

How Erdogan will handle his domestic problems and foreign entanglements is anyone’s guess. Erdogan the politician made peace with the Kurds, established a good neighbor policy regionally, and lifted tens of millions of Turks out of poverty.

But Erdogan the autocrat pulled his country into a senseless war with the Kurds and Syria, distorted the economy to build an election juggernaut, jailed political opponents, and turned Turkish democracy into one-man rule.

If the local elections were a sobering lesson for Erdogan, they should also be a wakeup call for the mainstream Turkish opposition.

The only reason the CHP now runs Turkey’s major cities is because the Kurdish HDP took a deep breath and voted for the party’s candidates. That must not have been easy. The CHP was largely silent when Erdogan launched his war on the Kurds in 2015 and voted with the AKP to remove parliamentary immunity for HDP members. That allowed the Turkish president to imprison 16 HDP parliamentarians, remove HDP mayors, and smash up Kurdish cities.

The Kurds demonstrated enormous political sophistication in the recent Turkish balloting, but they won’t be patient forever. Erdogan can be challenged, but — as the election demonstrated — only by a united front of center-left and left parties. That will require the CHP alliance to find a political solution to the demands of the Kurds for rights and autonomy.