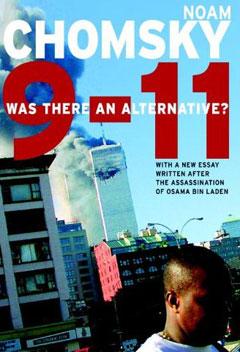 Review: 9/11 and Was There an Alternative?

Noam Chomsky updates his classic text with reflections on the death of Osama bin Laden.
By Christopher Bartlo | October 7, 2011 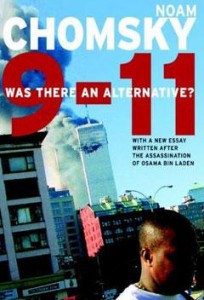 “The book you are holding was conceived, produced, and published as an act of protest.” This is the first line of the editor’s introduction to Noam Chomsky’s revised book about the causes and effects of the September 11 attacks. Originally titled simply 9-11, the book was published in November 2001. The 2011 edition features a new introduction — “Was There an Alternative?” — in which Chomsky comments on the assassination of Osama bin Laden and other developments since the book was first published.

Chomsky’s initial comments 10 years ago provide a sobering perspective today, warning about events that have since unfolded. Chomsky argues that the U.S. government has done exactly what Osama bin Laden wanted it to do: Dig into a series of expensive and bloody wars in Muslim countries, draining the American economy and causing many civilian casualties. As a result, “the security situation in Afghanistan has worsened to its lowest point since the toppling of the Taliban a decade ago and attacks on aid workers are at unprecedented levels.” The people of Afghanistan, teetering on the edge of starvation in September 2001, were deprived of much of the food and medical assistance from international aid that was keeping them alive because Coalition airstrikes destroyed infrastructure and made travel unsafe for aid trucks.

Chomsky laments that the U.S. government largely dismissed these human rights problems in its quest to “secure our interests.” The invasion of Afghanistan was far from the first time NATO overran unstable civilian populations in the search for terrorists (Chomsky offers several examples in the book) and, as we now know, it was not the last.

9-11 is a crash course in America’s terrorism against inconvenient regimes, and a primer in the ways that those in power have misled the American public by suggesting that September 11 happened in a vacuum. Readers interested in foreign policy and terrorism would find it very interesting, although they might be slightly frustrated by the way the book is organized into dialogues. Many of the questions that interviewers asked Chomsky in this book were very common at that time, but the type of answers that Chomsky gave were very rare in the mainstream Western media. For that reason, some of the topics (such as bombing “soft targets” in Nicaragua) are explained several times. This could be seen as a weakness in organization, but it helps to explain how the various topics are connected. This format also made it possible to publish the book only two months after the attacks, when the public needed a voice of reason.

Chomsky was one of the few people in the United States at that time to publicly talk about how deeply the CIA was involved in arming and training the mujahideen in Afghanistan during the 1980s. He explains the hypocrisy of the U.S. government’s definition of terrorism –the use of violence for political or psychological goals rather than monetary gain – in light of the fact that U.S. government agencies have been using exactly those methods for decades, directly and indirectly. When the U.S. government uses these tactics, they are not called terrorism but, rather, “low-intensity warfare.” For example, the United States recently risked a major international conflict with a nuclear-armed nation, Pakistan, by assassinating an influential figure in one of its major cities. That man, of course, was Osama bin Laden. The United States even had the poor judgment to name this adventure “Operation Geronimo.” As Chomsky says, “The imperial mentality is so profound, throughout western society, that no one can perceive that they are glorifying bin Laden by identifying him with courageous resistance against genocidal invaders.”