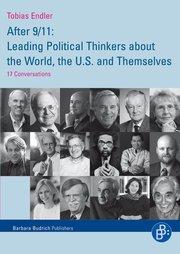 In a new book of interviews, Tobias Endler explores the role and aspirations of public intellectuals like Noam Chomsky and Howard Zinn and how they reach out to their preferred audiences.
By Derek Lyndes | April 29, 2011

In After 9/11: Leading Political Thinkers about the World, the U.S. and Themselves, researcher Tobias Endler explores the role and aspirations of public intellectuals and how they reach out to their preferred audiences. Endler is a Ph.D. candidate at Heidelburg University, Germany, where he researches the role and self-perception of public intellectuals in 21st-century America. Transcending the political spectrum, interviewees such as Noam Chomsky, Howard Zinn, Anne-Marie Slaughter, and Francis Fukuyama provide their rationale for the increased importance of foreign policy analysis after 9/11 and their work in the field. In particular, many of the intellectuals challenge the notion that their importance has declined in society.

Endler asks his interviewees how they define “public intellectuals,” how they define their role in American society before and after 9/11, how they think moral issues should be addressed in the public sphere, and how they approach the question of democracy promotion abroad. The 17 interviewees tend to agree that, for the most part, a public intellectual successfully translates the highly specialized language of the academy to a politically interested public, Dissidents like Noam Chomsky and Howard Zinn deny the existence of a vigorous public debate in the United States, given the subservience of the intellectual class to power and the lack of the criticism promoted in the academic establishment.

For example, Chomsky claims that public intellectuals “are not engaged in any kind of meaningful debate about the invasion of another country. For them, it is simply a strategic blunder, a well-intentioned effort to do good that ended up costing us too much. Ultimately, the decision to invade another country, frequently characterized by the general public as fundamentally immoral and wrong, cannot be considered so by the public intellectuals of this country.”

Those with considerable knowledge of the debate on public intellectuals might find this book too general. On the other hand, many of the interviewees provide some remarkable insights. Truly magnificent scholars and activists like Cornel West and Howard Zinn challenge many traditional assumptions behind “progress” and the relationship of intellectuals with academia and the political establishment. In particular, Howard Zinn asserts that “the ‘experts’ from the academic world around John F. Kennedy and L.B. Johnson during the Vietnam War lent [those administrations] a kind of authority. Those experts were dangerous to the public and to democracy. The idea is not to lead an ignorant public, but to educate them in such a way that they become aroused. In other words, enhancing democracy, not crippling it, with the fire of moral causes.”

Despite its dense packaging, After 9/11 more than makes up for its few weaknesses with a great cast of characters who illustrate their definition of public intellectual by challenging traditional assumptions and translating difficult ideas into accessible and often powerful insights for the general public. For any interested observer of the ongoing foreign policy debate in the United States, After 9/11 is a must.