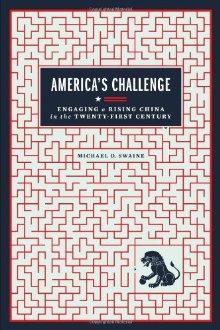 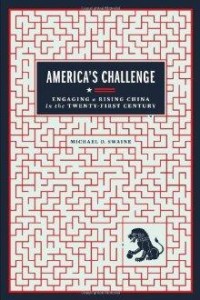 The relationship between the United States and China is probably the most important current bilateral tie in the world. In his new book America’s Challenge – Engaging a Rising China in the Twenty First Century, Michael Swaine at the Carnegie Endowment for International Peace interviews over 50 current and former U.S. officials in an effort to identify current problems and challenges in U.S.-China relations, evaluate policies adopted by the U.S. government, and propose ways to improve the relationship.

The most fundamental policy problem, as Swaine puts it, is to maximize China’s cooperation with the United States and with international institutions and prevent Chinese actions that could undermine U.S. vital interests. He concludes that U.S. policy toward China should be “cooperative engagement balanced with hedging.”

Specifically, Swaine proposes a U.S.-China-Japan dialogue to reduce mutual distrust. Concerning Taiwan, he suggests that the United States consider engaging in dialogue with Beijing to develop a “more stable modus vivendi” regarding deployments of the People’s Liberation Army and U.S. arms sales and defense assistance to Taiwan. As for the military, Washington should make efforts to strengthen its military relationship with China, keep a tight rein on hawks in the defense community, and seek to enhance strategic dialogues at both the bilateral and multilateral level. Regarding human rights, Swaine believes that Washington should “apply low-level pressure while providing aid to facilitate improvements in China’s legal system.”

Among the numerous recent publications on U.S.-China relations, Swaine’s new book stands out for several reasons. First, it is comprehensive and up to date. Swaine not only analyzes traditional challenges such as security, military, and the economy, he also addresses emerging concerns in the 21st century such as terrorism, WMD proliferation, climate change, and pandemics. And when assessing U.S.-China political and security relations, Swaine looks beyond this bilateral relationship and takes into consideration such important actors in East Asia as Taiwan, Japan, and the two Koreas.

Also, Swaine takes an approach of cautious optimism, in that he is both realistic and optimistic about U.S.-China relations. He has a penchant for dialogues, especially track II diplomacy involving academic scholars and former officials, believing such dialogues increase mutual trust and cooperation. He is confident that growing U.S.-China economic interdependence will reduce the possibly of military conflict. A defense expert, Swaine concludes that “there is little evidence that Beijing is seriously considering altering its current peace and development oriented grand strategy.” Swaine is also positive about China’s emerging civil society groups and improvement of governance. But he acknowledges that “the process of attaining U.S. goals within China regarding human rights and democracy is likely to remain incremental.”

In rejecting the myth of China as a unitary actor, Swaine reveals the various and sometimes contrasting interests within China. According to Swaine, China’s increasing military spending not only stems from national security but also from the military’s desire to “exercise some level of independence from civilian oversight.” That is, the military itself constitutes a parochial interest group that lobbies for more budgetary resources. Similarly, the Chinese government is highly concerned about energy security, yet in some cases China’s aggressive activities in developing regions derive from the profit-oriented attitude of Chinese energy companies.

Finally, America’s Challenge identifies certain U.S. policy failures and provides ways to correct them. For example, regarding economic relations, Swaine believes that the current global imbalance is caused by excess liquidity in the U.S. economy. Thus, the debt problem can be addressed more efficiently through proper U.S domestic economic policies rather than putting pressure on Beijing. Also, U.S. policy failures toward China sometimes involve failing to give China “face,” acknowledging the importance for the Chinese government of preserving its reputation at home and abroad.

America’s Challenge, though somewhat lengthy, is a valuable contribution to the literature on U.S.-China relations and to the reading list of diplomats looking for ways to improve the world’s most important relationship.