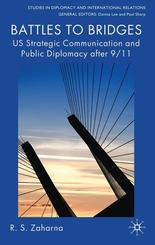 A new book diagnoses the problems with U.S. public diplomacy toward the Muslim world.
By Samer Araabi | December 1, 2010 Two characteristics of U.S. public diplomacy stand out in the wake of the 9/11 terrorist attacks: the creativity, resourcefulness, and range of the various strategies employed, and their complete and utter failure. In her groundbreaking analysis of the U.S. government’s attempt to “improve its image” in response to widespread global resentment, R.S. Zaharna has ably identified the fundamental flaws and weaknesses of U.S. public diplomacy. In her book, Battles to Bridges: U.S. Strategic Communication and Public Diplomacy after 9/11, she cogently argues that U.S. public diplomacy has failed to produce a grand strategy suitable for the age of networked communication.

Zaharna first traces the re-emergence of public diplomacy, from the “wake-up call” of 9/11, through the various strategies employed by each successive public diplomacy appointee, including Radio Sawa, Hi! Magazine, Al-Hurra TV, and other high-budget, high-profile initiatives. She then considers the failure of each project as a product of their consistent shortcomings: the attempt to avoid questions of policy, the lack of presidential involvement, the over-reliance on Cold War communication strategies, and a resistance to external opinion.

Though policymakers have vociferously called for “dialogue” and “communication” with the Middle East and other foreign publics, the policies themselves have steadfastly remained moored to an “information campaign” ideology, which stresses carefully crafted content delivered en masse through traditional one-way outlets: television, radio, and print. Foreign audiences were quick to criticize, dismiss, and lambast these attempts as ignorant, propagandistic, or pompous, thus undermining the goodwill the programs were intended to foster. These strategies demonstrate an unawareness – or an unwillingness – to open real communication channels and engage in a more relational approach with their intended audiences.

In the author’s view, “those who master connective, relational and networking strategies will have the edge in the global communication era.” In this battle the United States has fallen significantly behind, faced with an “impossible task of trying to operate between a public demanding change and an organization fighting back change.” In order to reassert itself globally, U.S. public diplomacy must integrate all its efforts into a new grand strategy, one that encourages cooperation, dialogue, and mutuality. Policymakers must learn to trust and respect global audiences enough to incorporate their opinions and concerns into a shared discourse. The control of information must give way to coordinated messaging, and diplomacy needs to shift from a “product” of the U.S. government to a “process” of mutual understanding.

In the “war of information,” U.S. policymakers have categorically failed to “out-communicate” their opponents, primarily because “the idea of fighting an information battle is a relic of the Cold War period… out of sync with the prevailing political and communication dynamics of the international arena.” Though the United States can never hope to unilaterally win, it is dangerously close to losing. Zaharna provides a well-reasoned prototype for a new grand strategy, laying the foundation for an evolved communication dynamic targeted at an increasingly networked audience. Its call for less control, more openness to criticism, and more respect for foreign audiences may be a bitter pill for U.S. policymakers to swallow, but it may well be the only hope for their future success.