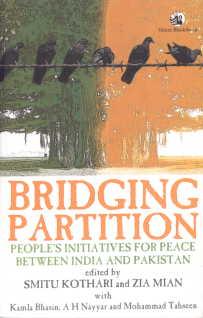 This powerful collection of essays describes the citizen diplomacy and peace movements that have been taking root in India and Pakistan.
By Robert Miller | April 14, 2010 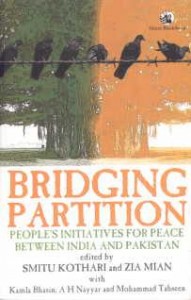 Over one million people would die before the partition of India and Pakistan was over in 1947, when one country suddenly became two. The governments in Delhi and Islamabad quickly set about recasting national identities that would strengthen each individual regime. Central to these newly formed identities was a strong loathing for the other side, developed through closed borders, years of warfare, and a systematic approach by both governments to create fear. The people, once united, became enemies.

Forty years later, a pushback against the government-assigned identity began to take root in both countries, resulting in a grassroots effort to build national and cross-border networks for peace and open communication. Bridging Partition: People’s Initiatives for Peace Between India and Pakistan, edited by Smitu Kothari and Zia Mian, is a collection of stories from the people involved in that effort. “This is not a paper,” writes contributor Kamla Bhasin, “This is a story, spanning my whole life; a story about one country becoming two; a story about our lands and homes becoming ‘foreign’ territories, alien, inaccessible; a story about neighbors, protectors, friends suddenly seen as enemies, killers, abductors.”

In “People to People Contact,” Kuldip Nayer shares a personal story of post-partition activism. The first time his group of activists met at the Wagah border between the two countries on the night of August 14, 1996 to light candles and commemorate the independence of the two countries, few others cared to join them and patriotic Indians openly criticized them. But they didn’t give up. Years later, defying all but the most optimistic expectations, Kuldip Nayer would take part in the same candle-lighting ceremony, this time with over 500,000 fellow Indians and Pakistanis. Those who took part came from distant parts of their two countries to dance and sing, eat and drink. For all who attended it was a chance to resist a national identity, which they had never chosen for themselves. It was a chance to be one again.

In “Changing the Paradigm,” Shehryar Ahmad writes about when Junoon, the first Pakistani rock band, performed in Mumbai in 1998. Government elites from both sides condemned the action. Bollywood did not feel the same way and Junoon became overnight celebrities in India. People from both countries looked past national identity and made the band’s song “Sayonee” a chart-topping hit. After overcoming political restrictions following the band’s denouncement of nuclear weapons, Junoon performed on stage with Indian rock sensation Euphoria at the 2003 MTV awards in Mumbai. The two bands hoisted both flags and proclaimed “Long live Pakistan, long live Hindustan.”

In “A Pakistani Looks at India,” Pervez Hoodbhoy writes about winning the UNESCO Kalinga prize in 2003. The prize included an opportunity to travel to India on a four-week lecture tour, from Delhi in the north all the way to Chennai in the south. Tensions between Pakistan and India kept him grounded for two years. In the winter of 2005, he was finally able to cross the border and begin the tour. In India, he met the educated and the poor, university professors and rickshaw drivers, secular and religious alike. He found that most Indians had never met a Pakistani and had, in their absence, formed prejudices and stereotypes. He also found that interaction and conversation eroded these tensions and that ingrained biases often fade over the course of a meal or conversation.

Bridging Partition is full of these stories. Editors Smitu Kothari and Zia Mian chose some of the best-written stories from both sides of this movement. Inspirational for Pakistanis and Indians and enlightening for the rest of us, Bridging Partition reminds us that real change in both countries will come about by people like these dedicated artists, activists, and academics. The only imperfection in this collection is that it perhaps errs too much on the side of optimism. The truth is that India and Pakistan are at a crossroads of identity wherein the fight for peace is uphill against well-entrenched foes.