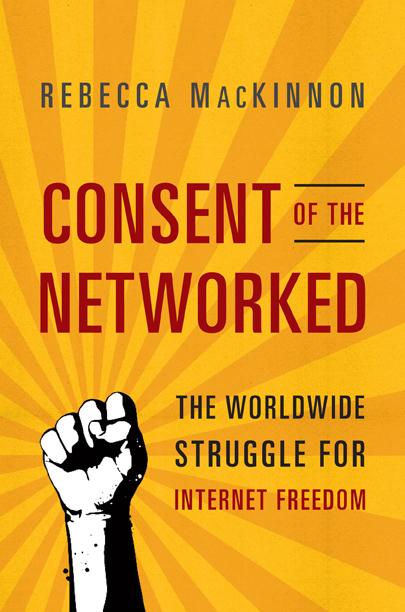 Review: Consent of the Networked

A new book provides an excellent account of the dilemmas involved in Internet policymaking.
By Julia Heath | May 28, 2012 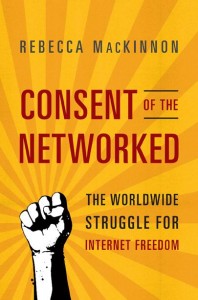 Internet policy-making is fraught with contradiction, corruption, and colonialism. In Consent of the Networked, Rebecca MacKinnon has produced an incredibly well-researched account of these dilemmas, which is as deep as it is vast. She uses case studies from around the globe, illuminates essential human rights issues, and names key stakeholders and their positions.

Many of us use Facebook to keep in touch with friends or make business connections. We rarely read the terms of service or think of the ramifications they could have for others. Facebook requires users, for example, to use their real names. Their argument is that people behave better when they can be identified. Bad behavior could include cyberharassment, spamming, or spreading false rumors. However, in totalitarian countries, users often wish to remain anonymous in order to safely discuss political or religious issues. In the former Soviet republics and Iran, for instance, users can be monitored specifically and arrested for making anti-government comments. Anonymity could also be necessary in situations where users discuss domestic violence, drug abuse, gender or sexuality, or other sensitive private topics.

In response to these shortcomings, new products like Tor, which enables users to upload and download without being traced, are becoming popular in places like China, Iran, and Egypt. Diaspora, Crabgrass, FreedomBox, and StatusNet are decentralized social media platforms that provide users local control and anonymity, which makes them better suited for activists.

In Egypt and other countries, the government has the ability to shut down mobile phone and Internet service. In the United States, mobile service providers like T-Mobile can decide to block content based on their preferences. Therefore, groups like Detroit’s Digital Justice Coalition have created community-owned broadband and wireless networks to promote local innovation and civic involvement. Users are rapidly shaping technology to meet their needs.

Intellectual property rights are another major driver of Internet policy, especially in the West. In the United States, the Recording Industry Association of America spent $17.5 million on congressional lobbying in 2009. MacKinnon argues that technical innovators and not lobbyists must create Internet policy. This is becoming more evident in Europe, with Sweden’s Pirate Party (which defends the right of citizens to share files) winning two seats in the European Parliament with 7 percent of the Swedish vote.

A final example is the colonial or western centric approach to Internet innovation and policy. Large technical firms like Microsoft, Apple, and Google produce and manage much of the information we see on the Internet. MacKinnon says the amount of traffic you produce dictates your visibility on the net. Therefore, because Africa only produces 2 percent of the traffic on the net, African sources are essentially invisible.

MacKinnon recommends net neutrality, transparency, accountability, local control suited to local conditions, and a balance between protecting producer and consumer rights. “There can be no cyberliberty,” she quotes Internet scholar Milton Mueller, “without a political movement to define, defend, and institutionalize individual rights and freedoms on a transnational scale.”