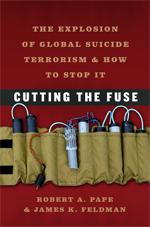 In Cutting the Fuse, Robert A. Pape and James K. Feldman build on Pape’s earlier work on suicide terrorism to explain the tremendous surge in attacks between 2004 and 2009. In these six years there have been a total of 1,833 suicide attacks around the world compared with a total of 350 during the period of 1980 through 2003. Perhaps most dramatic is the comparative rise in the percentage of attacks aimed at American interests. Of the 350 attacks carried out between 1980 and 2003, fewer than 15 percent were aimed at America. Between 2004 and 2009, 92 percent of attacks can be seen as anti-American. This startling jump seems clearly attributable to U.S. foreign policy in the Middle East, and in particular, the invasion of Iraq and Afghanistan where most of the attacks have taken place. This statistic also further strengthens Pape’s earlier argument that the primary cause of suicide terrorism is foreign occupation.

In his groundbreaking study Dying to Win: The Strategic Logic of Suicide Terrorism (2005), Pape argues that far from being an irrational strategy pursued by religious fanatics, suicide terrorism is employed by weak actors to coerce foreign occupiers from what they consider to be their national homeland. Based on data collected on all suicide attacks carried out from 1980 to 2003, the first such complete data set of its kind, Pape further finds that suicide terrorism was largely against democratic states, thought to be particularly susceptible to coercive tactics, further indicating suicide terrorism’s strategic nature. Contrary to the popular notion that attackers are poor, uneducated young men, Pape finds that suicide terrorists more closely resemble those most likely to join grass-roots political movements. Indeed, many attackers appear to have been secular, well-educated, economically stable individuals, with no previous connections to terrorist organizations.

Cutting the Fuse further tests the thesis posited in Dying to Win by considering new data from 2004 to 2009 along with the original data from 1980 to 2003. In order to further bolster their argument, Pape and Feldman consider several case studies of large-scale suicide campaigns, including those in Iraq, Afghanistan, Pakistan, Lebanon, Israel, and Sri Lanka as well as the ongoing operations of al-Qaeda.

In each of these case studies, Pape and Feldman lay out how foreign occupation or the imminent threat of occupation is the driving force behind the decision of resistance groups to engage in suicide terrorism. The cases of Iraq and Afghanistan offer ideal opportunities to test the thesis. Tellingly, prior to the U.S. invasion in March 2003, there had never been a suicide attack in Iraq. Iraq witnessed its first suicide attack several days after the invasion. Suicide attacks increased drastically over the next five years, reaching their height with over 300 (nearly as many as in the entire period between 1980 and 2003) attacks in 2007, before dropping significantly in 2008 and again in 2009.

Of particular note is the identity of the attackers themselves. The majority of attackers were Iraqi nationals, all members of the Sunni minority. Indeed, Sunnis were the community “most threatened by the American occupation,” particularly given their fears of political disenfranchisement and oppression at the hands of the Shia majority in a newly democratic Iraq.The steep drop-off of suicide attacks in 2008 corresponded with the “Sunni Awakening,” in which those communities were “empowered to provide for their own security and autonomy,” as well as the perception that the United States was drawing down its occupation.

Afghanistan offers a similar case study in the strategic logic of suicide terrorism. Prior to the U.S. invasion in 2001, only one suicide attack had taken place in the country – by al-Qaeda against the leader of the Northern Alliance two days before the attacks of 9/11. Suicide attacks in Afghanistan mirrored the increase in NATO troops. Indeed, NATO’s movement into and occupation of the Pashtun homeland has seen a dramatic increase in suicide terrorism.

Pape and Feldman directly taken on what they call “The Narrative.” The popular explanation for suicide bombings after the 9/11 attacks was anti-Americanism as a product of Islamic fundamentalism. The solution, therefore, was the transformation of Muslim societies into democracies. Pape points out several large flaws in this logic. According to “The Narrative,” suicide attackers should come from states with large populations of Islamic fundamentalists, such as Iran, Bangladesh, Sudan, and Iraq and Afghanistan prior to invasion. However, none did. Rather, the majority of suicide attackers have come from areas under direct or indirect foreign occupation, including Saudi Arabia, Palestine, Lebanon, Chechnya, and more recently Iraq, Afghanistan, and Pakistan.

Moreover, a comparative study of groups engaged in suicide terrorism such as the Liberation Tigers of Tamil Eelam (LTTE) and the Marxist PKK indicate that suicide terrorism is not a uniquely Islamic phenomenon. Indeed, the LTTE, which popularized the use of suicide belts and was one of the most prolific suicide terrorist organizations until its collapse in 2009, was an avowedly secular group. Furthermore, the individuals who carry out suicide attacks, even when the group itself is Islamic, are motivated by nationalistic goals. A prime example of this can be found with Hezbollah. Indeed, most of Hezbollah’s suicide attackers have been secular, and their goal was to evict Israeli forces from southern Lebanon.

Foreign occupation is the common thread tying suicide terrorism together the world over. In Dying to Win and again in Cutting the Fuse, Pape argues that the United States must endeavor to draw down its occupation of Middle Eastern countries and return to a policy of offshore balancing to maintain its regional interests. As he warned in his earlier work, continued occupation will lead to an increase in suicide terrorism against the United States including an increased risk of attack against the American homeland. Cutting the Fuse is an invaluable extension of the arguments presented in Dying to Win, and the two should be read as companion volumes.

Greg ChaffinGreg Chaffin is a research assistant with Foreign Policy in Focus.