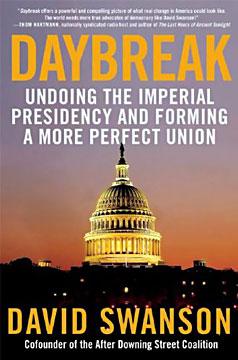 David Swanson exposes the crimes of the Bush-Cheney regime and calls for a more perfect union.
By John Feffer, Duran Parsi | November 18, 2009 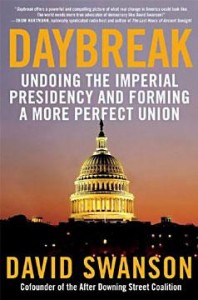 David Swanson’s provocative new book Daybreak brings to light the many crimes and injustices perpetrated by the Bush team during its eight-year term. The Obama administration’s reluctance to confront head-on the various illegalities committed by the Bush-Cheney regime l eaves the door open, Swanson argues, for future abuses of power, “I oppose accepting the pretense that one president orders torture legal and the next orders it illegal,” he writes. “If we accept that, then what is to prevent a future president declaring it legal again?” It isn’t enough for the Obama administration to reverse the policies of George W. Bush, which ranged from torture and censorship to spying and misappropriation of funds. Criminal prosecution of Bush and Dick Cheney can diminish the likelihood of future abuses of executive authority.

Furthermore, Swanson is critical of the Obama administration for not doing enough to distance itself from the Bush era. For instance, Obama’s use of signing statements to shape the implementation of legislation, which cannot be overturned by Congress or challenged in court, blatantly abuses constitutional power. If Obama truly wishes to enact the change he promised in his campaign, Swanson boldly asserts, he must break from the “unitary executive” that Bush created.

One of the most interesting sections in Swanson’s book deals with the militarism of U.S. policy. He rightly points out that our military apparatus is invasive, largely useless, and unnecessarily costly. For example, U.S. foreign bases account for over 95% of the world’s foreign bases. If closed, they could save the United States $140 billion a year. “These bases, large and small, do a lot more harm than good,” Swanson states. They serve as focal points for protests and anti-American sentiment. His story of 200,000 people marching to the Italian city of Vicenza to protest the proposed American military base is a telling example of how U.S. militarism adversely affects the world.

Swanson proposes a plethora of changes that would help create “a more perfect union”: clean campaign financing, a reduction in the power of political parties, a balanced budget, and limiting the power of Supreme Court justices. He also proposes amendments to the constitution that reaffirm the original document’s emphasis on the legislative branch, the House of Representatives and the Senate, as the primary foreign-policy-making branch of government. In the final part of the book, Swanson outlines ways in which citizens can contribute to achieving these goals — through thinking, voting, and taking action. An apathetic population that fails to turn out on election days is not going to enact change. People must hold not only the executive branch accountable but also the legislative branch, for failing to exercise the powers that the Constitution has granted it.

John Feffer, Duran ParsiDuran Parsi is an intern at Foreign Policy In Focus.