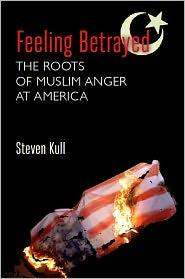 Review: The Roots of Muslim Anger at America

A new study explores how U.S. foreign policy has fanned the flames of anti-Americanism in the Islamic world -- and how the only way out is democracy.
By Peter Certo | July 8, 2011

With nearly a decade under its belt in the so-called war on terror, the United States remains mired in Afghanistan, lingers on in Iraq, and is currently expanding its largely unacknowledged drone wars in Pakistan, Yemen, and beyond. And what to show for it? Regimes have been changed, certainly. Osama bin Laden is dead, and the al-Qaeda base of operations he established in Afghanistan has been essentially dismantled.

But these gains, of course, have come at a tremendous cost – one that outruns our domestic problems and the more immediate quagmires of our present theaters of conflict.

In his new book, Feeling Betrayed: The Roots of Muslim Anger at America, political psychologist and public opinion expert Steven Kull suggests that the reservoir of Muslim discontent with U.S. foreign policy remains as deep as it ever was. He argues that al-Qaeda, like any terrorist group, is able to operate in part because it can draw on a culture of support from within its broader community. Although they may have sharp qualms about al-Qaeda’s methods and its extreme form of Islam, many Muslims in Muslim-majority countries are drawn to defend the group’s resistance to the United States. This provides al-Qaeda with a “culture of violence,” to borrow a term from sociologist Mark Juergensmeyer, from which to draw recruits, acceptance, and sympathy.

To uncover the source of this anger, Kull conducted in-depth surveys in 11 Muslim-majority countries over several years and held focus groups in several others. Analyzing these results along with data from other surveys, he provides perhaps the most detailed, empirical exploration of “the roots of Muslim anger” to date.

In so doing, Kull blots out the largely anecdotal evidence and arbitrary line drawing underpinning “clash of civilizations” explanations for international hostilities.

Muslims in Muslim-majority countries, according to Kull’s data, are as favorably inclined toward democracy as virtually anyone else in the world. Similarly, with certain qualifications, they hold positive attitudes toward human rights, free expression, religious freedom, and the role of women – orientations that are more or less comparable to attitudes elsewhere. They are also generally supportive of a liberal international order where states are constrained by norms of human rights and world democracy, though the perception of the United Nations as a tool of the United States has at times negatively impacted its favorability.

At the same time, although attracted to “Western” political norms and cultural exports, Muslims also tend to worry about being overwhelmed by them. When coupled with aggressive U.S. foreign policy in the region, American influence assumes a more menacing guise. Most Muslims already believe U.S. Middle East policy is largely geared to protect U.S. access to oil and Israel. But they also see an effort to impose a secular, even Christian, order on Islamic countries. On this account, Kull notes that there remains widespread support in the Muslim world for Sharia-inspired political systems. He takes pains to note that Muslims generally see Islamism and democracy as fully compatible, so the perception that the United States is hostile to Islam becomes a point of contention for Islamists and Muslim liberals alike.

According to Kull, Muslims see the United States as an insincere promulgator of liberal values. While America advocates liberal constraints on other countries, it behaves as though it is itself uniquely unconstrained. On issues of religion, war, and politics, Kull’s surveys and focus groups repeatedly uncover accusations that the United States has betrayed its core principles.

Importantly, most Muslims in majority-Muslim countries deplore al-Qaeda’s use of violence against civilians, and few would desire a society informed by al-Qaeda’s particular Islamic norms. Nonetheless, many of al-Qaeda’s goals – including especially an Islamic-influenced society and removal of U.S. troops from Muslim countries – poll exceptionally well across countries. Al-Qaeda may be seen as a threat, but the threat from the United States is seen as more existential, immediate, and salient.

Kull draws skillfully on his background as a psychologist. What is often viewed in the West as a “clash of civilizations,” he says, is really an internal conflict within the Muslim world, perhaps not dissimilar from the secular-religious culture wars that have played out in the United States and Europe for ages. The problem is that the United States is seen as placing its finger on the scale, which “externalizes” the conflict and obscures its contours. Rather than a debate within Muslim countries, it becomes a rivalry between the United States and Muslims, and perhaps Islam itself. This discredits Muslim secularists and draws attention away from those aspects of al-Qaeda and other groups that unaffiliated Muslims would normally find most distasteful.

The answer, Kull says, is for the United States “to extract itself from the externalized conflict as much as possible.” He notes that merely cosmetic and rhetorical adjustments will not suffice. President Obama’s favorability ratings in most Islamic countries, after all, are relatively low.

At the level of rhetoric, Kull recommends that the United States renew its commitment to liberal principles, openly renounce a right to Middle Eastern oil, emphasize distinctions between itself and Israel, and refrain from its nasty habit of making veiled threats. More substantively, he says that the United States should withdraw its troops from the Persian Gulf, where they provide little security advantage and serve only to inflame public opinion. Such a withdrawal should parallel a renewed commitment to extricating the United States from Iraq and Afghanistan.

Perhaps most importantly, citing unfortunate precedents from Algeria, Palestine, and Egypt – where the United States transparently backed off its support for free elections after Islamist parties performed well in them – Kull says the United States must accept the participation of moderate (i.e., nonviolent) Islamist political parties in open systems. To resist them merely on account of their Islamism, he argues, is to appear anti-Islamic – and to once more prevent Muslim voting publics from sorting out their ideas about society on their own. Open Islamist participation can only marginalize the non-democratic forces of al-Qaeda.

Kull conducted his studies before the monumental uprisings across the Arab world. The cases of Egypt and Tunisia will prove important laboratories for testing U.S. commitment to democracy in a rapidly changing region. Let’s hope someone in Washington is paying attention to what Muslims are saying and what Steven Kull is reporting.

Peter CertoPeter Certo is a research assistant with Foreign Policy In Focus.