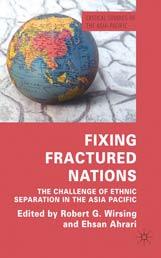 A new collection of essays provides a comprehensive survey of ethnic conflicts in the Asia-Pacific region.
By Greg Chaffin | August 2, 2010

In their book, Fixing Fractured Nations: The Challenge of Ethnic Separatism in the Asia-Pacific, editors Robert G. Wirsing and Ehsan Ahari compiled essays on several of the major ethnic conflicts that have plagued the Asian continent over the past several decades. The book provides a comprehensive study of major ethnic conflict throughout Asia with sections on Southeast Asia, South Asia, East Asia, and the Pacific Islands (with a focus on Papua New Guinea). In the concluding chapter, Ehrari places each of the essays into a geopolitical context shaped by the Cold War and by 9/11.

Each essay presents an interesting and well-informed exposition of the history of each conflict. The authors tend to focus on the misguided or counterproductive steps taken by the respective governments that have only exacerbated the conflicts. Many of the essays demonstrate that the government’s use of “hard power” to resolve fundamentally political conflicts lead to disastrous results, and a corresponding escalation in tensions and violence. The only exception to this rule has been Sri Lanka, where the government engaged in an intense (and ultimately successful) military operation to decimate the Tamil Tigers. However, as in the other cases presented, the ultimate resolution of the Sri Lankan conflict remains within the political realm. Without a political solution that concretely addresses the grievances of the conflicting parties, a lasting peace cannot be achieved.

The title of the book gives the impression that each essay, after outlining the conflicts, will attempt to offer a “fix” for the fractured nation. Unfortunately, many of the essays don’t quite live up to this admittedly high expectation. The only essay in the book that offers concrete steps is on Myanmar/Burma. But it focuses largely on the international community’s management of Myanmar’s junta in order to avoid the inevitable ethnic conflicts that would arise should the junta fall. The remaining essays offer general solutions to each conflict, but are very short on details. An example of this cursory treatment can be found at the end of Van Wie Davis’ essay on Uyghur separatism, in which she states: “Economic solutions remain the backbone of Beijing’s approach, but these must be supplemented with clear policies that ensure that the bulk of economic incentives in Xinjiang are for the ethnic minorities.” Unfortunately, the author fails to give more details regarding what these “clear policies” might look like.

Overall, Fixing Fractured Nations offers an interesting and informative discussion of conflicts in Asia that are ignored or underreported in Western media. In several instances, notably the essays on Myanmar/Burma, Balochistan, Kashmir, and China, the authors include an international perspective on the conflicts. Given the pace of globalization, particularly as it pertains to energy and resource allocation and security, external actors must increasingly consider what were once seen as small internal conflicts and integrate this analysis into foreign policy decisions. This requires a much more nuanced understanding of each conflict.

Although Fixing Fractured Nations doesn’t perhaps offer the concrete solutions that it implicitly promises, its comprehensive analysis of ethnic conflicts in Asia provides the basis on which real solutions can eventually be formulated.