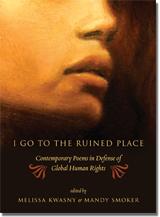 Review: ‘I Go to the Ruined Place’

These contemporary poems in defense of global human rights give voice to the dead, the dying, and the degraded.
By Alicia Gregory | July 16, 2010 The infamous torture photos from Abu Ghraib were first released to the public in 2003. The horrific images of prisoners hog-tied and beaten naked, leashed like dogs with bags over their heads, and posed in forced sexual positions — all with grinning U.S soldiers in the background — rode with us on the morning commute, made their way onto our computers at lunchtime, and sat with us during the six o’clock news. The pictures were a challenge as well as a revelation. As editors Melissa Kwasny and M.L Smoker write in their introduction of I Go to the Ruined Place: Contemporary Poems in Defense of Global Human Rights: “We suddenly seem[ed] to be asked to decide to what extent we will stand up and speak out for human rights.”

The photos of Abu Ghraib, and the questions that arose in the aftermath, motivated Kwasny and Smoker to put out a call for poems that spoke in the defense of human rights. The anthology, I Go to the Ruined Place, is a collection of both first-hand accounts and responses to a range of violations of humanity. The authors paint pictures, through language, that are just as startling as photographs.

In all of the poems, the authors take on the role of witness, unearthing details that put the reader inside the experience. Tamiko Beyer likens a tongue to the blister on a burned boy in “Report.” Philip Metres recalls a family war story told over baklava and tea in “Letter to My Sister.” In “World Music,” Peter Marcus describes countryside vegetable planters made out of old shell casements. And Gabe Furshong unearths the ring around a finger-bone of a woman long dead and secretly buried in “Reburial.”

Poetry provides a necessary space for the details that make the stories come alive — details that are lacking in much of today’s disengaged, drive-by journalism.

Mainstream media’s coverage of social ills has desensitized us to the horrors reported in the headlines. The language of poetry, with its precision and specificity, pushes readers to confront the ugly side of human nature that is often concealed in banal, bureaucratic phrases. In the introduction, Kwasny and Smoker use the terms “alternative set of procedures” and “enhanced interrogation techniques” as examples of the hollow, abstract language used to describe torture.

While the poems cover an intense range of experience — the thoughts of a man raped in prison (Adrian English’s “Raped Man’s Stream of Consciousness”), the aftermath of 9/11 (Susan Rich’s “Mohamud at the Mosque”), the arrest of an illegal immigrant (Aimee Parkison’s “Undocumented”), and even an exploration of the word lynch (Martha Collins’s “Lynch”) — each and every single poem speaks of the human connection we all share.

Though the original call for poems asked for words in defense of human rights, the work submitted reaches far beyond that call. At the heart of this collection is the repeated declaration that we are one. In her poem “Noorjahan,” (translated by Carolyne Wright) Taslima Nasrin writes of a woman stoned. In one startling question, she challenges us to embrace our moral obligation to one another:

Are these stones not striking you?