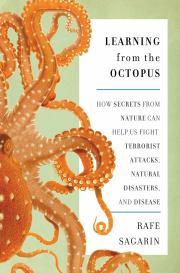 Review: Learning from the Octopus

Nature is the best model for human security, according to a new book by a marine ecologist.
By Yunping Chen | April 30, 2012

Rafe Sagarin, the author of Learning from the Octopus, is a marine ecologist and security expert. Years of marine research provide him with a unique perspective on security issues. His new book’s conclusion: we can learn from nature about being more secure by being more adaptable. Nature, after 3.5 billion years of dealing with risk, is an experienced teacher.

Consider the example of the Mola mola, the ocean sun fish. It’s not a pretty or a perfect fish. It is simply good enough when it comes to adapting to its environment, and so it has survived for millions of years. Nature tells us that it doesn’t matter how close an organism is to its own theoretically optimal performance as long as it survives in its environment.

Human beings, on the other hand, always want better, more complicated security systems, such as higher levees to protect us from the risk of rising water. This insistence on ever more perfect security systems puts us in an awkward situation. We spend more and more time raising the security level at airports, but it doesn’t prevent security breaches. Our meticulous plans not only let us down but lead to another round of upgrades. Nature does not plan, predict, or try to be perfect. Living creatures simply adapt themselves to be good enough to solve problems.

Sagarin offers four important ideas. First, decentralized systems that delegate power to independent agents encourage a spontaneous diversity of responses. Bare-foot running, for instance, is better for us than using running shoes, which suggests that our default centralized system of athletic equipment undermines natural adaptation. The second lesson is the creative redundancy of nature. Instead of one solution, redundancy means lots of diversity and flexibility. DNA contains the code for multiple copies of important genes, which protects against damage to that section of the DNA molecule and serves as a hedge against errors in transcribing the genetic code during cell division. This runs counter to our determined search for a cure-all to deal with risk. Symbiotic relationships and partnerships, so common in nature, also challenge our habitual recourse to unilateral action and preparation for worst-case scenarios. The final lesson, about “just enough change,” is a precondition for coexistence. “Even with very destructive belief systems,” Sagarin says, “a radical change is not needed to be able to live with the risk of any given group.”

The octopus is the best teacher in this regard. Its rapidly changing skin cells are a very effective adaptation. It has the power to detect and respond to change without direct orders from the central brain. The octopus’s ink cloud, camouflage, and powerful bite, in their redundancy and multi-functionality, are its best weapons of offense and defense. It has a symbiotic relationship with deadly bacteria that it uses as defense.

In the human society, more often than not, we fail to recognize nature as the best template for learning to be as adaptable as the Mola mola or the octopus. Instead as the author puts it, “We have met the enemy and he is us.”

Yunping ChenYunping Chen is a contributor to Foreign Policy In Focus.