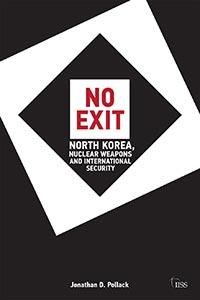 A new book on North Korea provides the context for understanding its nuclear program.
By Shiran Shen | August 10, 2011

North Korea is of perennial security concern to both its neighbors and the United States. North Korea is the only state that has ever withdrawn from the Nonproliferation Treaty and reneged on every denuclearization agreement it had ever signed. In late 2010, satellite data indicated that North Korea possessed a uranium enrichment facility, and now a potential third nuclear test is underway. No Exit: North Korea, Nuclear Weapons and International Security is one of the few books to date in the English language that provides a detailed, beyond-the-Beltway account of North Korea’s history, leadership, and nuclear development. With the belief that the how and why of the Korean nuclear impasse must begin with the North Korean system and its history, author Jonathan Pollack consults Cold War archives, interviews, and technical history, among others, to weave together the history of North Korea and its nuclear program from its origins through 2010.

Pollack starts out by elaborating on the Korea-first identity, the very notion on which North Korea was built. North Korea has its own distinctive version of adversarial nationalism that legitimized the state in an internal context and provided the foundation upon which it interacted with the outside world. After fighting guerrilla wars in Manchuria in his early life, the Great Leader Kim Il-Sung saw himself as a survivor in a hostile world. Returning to Korea after 26 years in exile, he established the Korean People’s Army (KPA) and later founded the Democratic People’s Republic of Korea (DPRK). He distrusted those outside his immediate circle of subordinates. So, echoing the Korean dynastic tradition of hereditary rule, Kim established that power should be passed from father to son, an accomplishment unprecedented in Marxist-Leninist history. He introduced the highly enforced ideology of juche. Though often translated as “self-reliance,” it is better characterized as “self-determination,” meaning that North Korea can get whatever it needs from different sources in the international system but external factors do not control its fate .

Kim wanted to make North Korea an impregnable fortress answerable to no outside forces, and nuclear weapons were a large part of the strategy. It is not yet known when exactly Kim made the decision to develop a nuclear program in North Korea, though it was probably in the early 1970s when China and the former Soviet Union began to pursue détente with the United States. Kim Il-Sung had three major considerations for nuclear development. First, he was doubtful of Beijing’s and Moscow’s unconditional and indefinite support of his ambitions and plans. He was also envious and fearful of the South’s covert nuclear activities. Finally, the North Korean leader was gravely concerned about his regime’s longer-term prospects, especially the impending leadership succession. Kim decided that North Korean power, identity, strategic interests, and longevity would be better preserved with nuclear weapons than without.

The North’s sense of crisis was reignited when the communist world began to witness sea changes in the late 1980s. Accompanied by the growing urgency of leadership succession in the early 1990s, North Korea announced its withdrawal from the Nonproliferation Treaty in 1993. The Great Leader passed away the following year. With the death of Kim Il-sung, Pollack warns that the door to definitive denuclearization may have closed, considering that Kim Il-sung was the leader with the stature to engage in high-level nuclear diplomacy and to possibly consider the ultimate abandonment of nuclear weapons.

In conclusion, Pollack rightly suggests that any assessment of the nuclear issue must begin with the future of North Korea itself. Pollack identifies a collective failure of the international community to prevent or inhibit North Korean nuclear development. During this period, North Korea has become more invested in a nuclear identity. As it stands now, North Korea does not feel under any acute pressure to abandon its nuclear capabilities. Buying time is far from enough, considering that China remains prepared to serve as North Korea’s last resort. Discussion with North Korea may be more fruitful than discussion about North Korea.

This book is a great resource for anyone who wants to learn more about the North Korean nuclear strategy in both the academic and policy realms. It’s mostly told from the Korean vantage point, so it serves as a useful complement to the relatively rich, inside-the-Beltway literature on the development of U.S. policy toward North Korea.