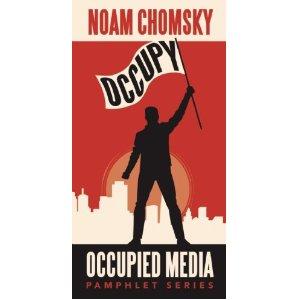 Veteran writer and activist Noam Chomsky is not one to watch the Occupy movement from the sidelines.
By John Feffer | April 6, 2012

Noam Chomsky has seen a lot of social movements. He cut his teeth on the civil rights and anti-war movements of the 1960s and 1970s. He participated in the anti-intervention struggles of the 1980s as well as in the World Social Forums that began in the 1990s. Now in his 80s, Chomsky has hardly slowed down with his schedule of writing and speaking and agitating. And he is certainly not one to watch the new Occupy movement from the sidelines.

The latest publication from the new Occupied Media Pamphlet Series brings together several of Chomsky’s intersections with the Occupy movement. There’s a lecture he gave at Occupy Boston in October 2011, an interview in January 2012 with a student about the meaning of Occupy, a conference call with hundreds of Occupiers later that same month, a subsequent speech on “occupying foreign policy” at the University of Maryland, and a brief tribute to his friend and co-agitator Howard Zinn.

Having spent so much time thinking about and engaging with social movements, Chomsky is both optimistic about the energy of Occupy and realistic about the challenges it faces. He appreciates the “just do it” ethos and embraces its radical approach to participatory democracy. But he reminds his audiences that all social movements reach further than they can grasp. The influence of money on U.S. politics, the huge weight of the military-industrial complex, the rapaciousness of financial speculation: these are forces not easily dislodged by people gathering together in public spaces and voicing their opinions. And yet, as Chomsky points out, the mostly non-violent, non-funded, and non-partisan set of actions radiating out from Zuccotti Park in Manhattan managed to change the national discussion about economic inequality.

This inequality, he argues, is the result of a 30-year-long class war that has hollowed out the middle class and put great pressure on the poor in the United States. The neoliberal push for privatization and lower trade barriers has carried that war to every corner of the globe. The Occupy movement is pushing back against the actors, the actions, and most importantly the consequences of this class warfare. Not surprisingly, given the vested interests being challenged, the pushback of the 99 percent has generated pushback in turn from the 1 percent.

What makes Chomsky’s perspective so interesting, aside from the wealth of his political experience, is the range of his interests. He draws from examples around the world to demonstrate his points. When talking about community-based media, for instance, he describes a scene from a Brazilian slum where media professionals set up a truck in a public square – to show skits and plays written by people in the community – and then walked around to interview people for their reactions. Why can’t we do something similar in the United States, Chomsky wonders.

It’s a big agenda that Occupy has identified, nothing less than a complete renewal of U.S. society and the U.S. role in the world. Chomsky sees not only the radical agenda but also the radical practice of the Occupiers. “Part of what functioning, free communities like the Occupy communities can be working for and spreading to others is just a different way of living, which is not based on maximizing consumer goods, but on maximizing values that are important for life,” he concludes in this valuable set of remarks and interviews.

John FefferJohn Feffer is co-director of Foreign Policy in Focus.