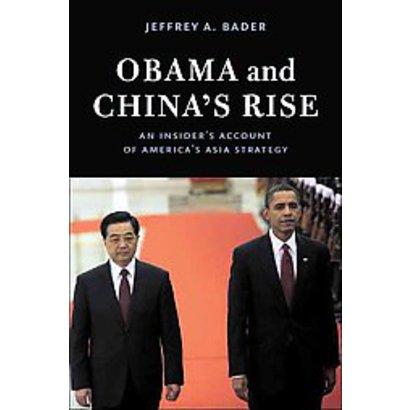 A new book offers a look at the Obama administration's China policy from the inside.
By Shiran Shen | October 9, 2012 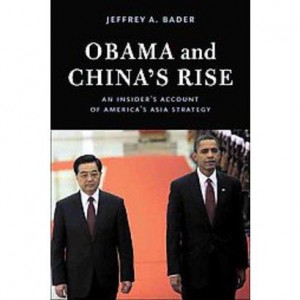 The main geostrategic challenge facing Asia—as well as the U.S. presence there—has been the extraordinary rise of China in the past decade. In Obama and China’s Rise, Jeffrey Bader, a veteran diplomat of over 30 years, recounts his experiences working for Obama’s presidential campaign and serving as the senior director for East Asian affairs on Obama’s National Security Council from January 2009 to April 2011.

Bader starts off outlining the Obama administration’s seven major goals in Asia: 1) rebalance U.S. global priorities with greater attention paid to Asia, 2) promote a stable relationship and closer cooperation with China on international issues, 3) work towards complete denuclearization in North Korea through bilateral or multilateral negotiations, 4) strengthen and participate in Asian regional institutions, 5) strengthen alliances and partnerships—especially with Japan, South Korea, India, Indonesia, and Australia, 6) maintain forward deployment of U.S. armed forces in the region, and 7) negotiate agreements to expand trade and exports to the region.

The Obama team was fully aware of the importance of maintaining a stable and functional relationship with China. From the 2008 campaign on, the administration was careful not to label China as the bogeyman of all America’s ailments.

The book is organized around three phases of major U.S.-China interactions that occurred during Bader’s tenure at the National Security Council. The first stage was to lay the groundwork for a stable and healthy bilateral relationship. On April 1, 2009, President Obama and Chinese President Hu Jintao announced the establishment of the Strategic and Economic Dialogue (S&ED), which would provide a platform for a dozen officials from each side to meet annually. This mechanism is unprecedented in U.S. relations with any other country in the world, which indicates the paramount importance the Obama administration attached to China. The first phase also involved Obama’s first trip to China, close cooperation on North Korea and Iran, parallel implementation of economic stimulus packages, and some limited cooperation at the Copenhagen Climate Conference.

Despite this progress, the Obama administration has faced a China more assertive than at any other time in recent memory. This was especially true in 2010, a year defined by Chinese assertiveness and the second phase of Obama’s dealings with China. In 2010, Chinese policy tilted toward sheltering North Korea from international sanctions. The Chinese also excluded the United States from military activities in the Yellow Sea and engaged in an overt confrontation with Japan after the collision of a Chinese fishing boat with two Japanese Coast Guard patrol boats in disputed waters near the Senkaku Islands—with the latter leading to a temporary freeze on Chinese rare earth exports to Japan. China also threatened to halt imports from companies that engaged in arms sales to Taiwan, a pointed jab at U.S. weapons sales to the country. Perhaps most significantly, China aggressively expanded its claims on the South China Sea.

The Obama administration reacted by signaling to China that assertiveness would only make China lose critical economic partners. Yet even as the United States acknowledged the inevitability of China’s rise, Bader summarizes that the Obama administration pragmatically “sought to ensure that China’s rise served to stabilize, not destabilize, the Asia-Pacific region, which included five U.S. allies and other partners in whose security Americans had an interest.”

In light of this, the Obama administration reasserted U.S. interests in the South China Sea and reiterated America’s commitment to Japan’s security, even while remaining ostensibly neutral on the question of the Senkaku Islands. Bader believes that China clumsily alienated its partners in the region, yet its foreign policy analysts confused cause and effect and blamed the United States for the deterioration in China’s relations with its neighbors. Bader writes that by the end of 2010, China had begun to rethink its assertive posturing.

Bader suggests that it was not until early 2011, when Hu Jintao visited the United States, that U.S.-China bilateral relations began to get back on track, opening up what Bader considers the third stage, which has been marked by continued progress on security issues and greater emphasis on bilateral and global economic issues as China approaches its once-a-decade leadership transition.

According to Bader’s assessment, the Obama administration managed the key issues in the bilateral relationship quite well, making important progress on Iran, climate change, North Korea, and the world economy. Although Bader supports the administration’s “strategic pivot” to East Asia, he believes the term is a misnomer that over-militarizes the actual implications of the policy. The net U.S. military presence is not going to increase except with the deployment of 2,500 U.S. Marines to Darwin, Australia. What better characterizes the dynamic, Bader argues, quoting National Security Adviser Thomas Donilon, is a “rebalancing of U.S. priorities toward the Asia-Pacific.”

Obama and China’s Rise is the first account of Asia policy-making in the Obama administration written by someone who was part of the effort. Bader’s account captures the details while contextualizing them in the larger picture. However, Bader’s account does not reveal much about the disagreements among various policymakers about how best to deal with China and Asia at large, nor about how the administration decided on which strategy to pursue. Obama and China’s Rise is a fine account of what the administration did, but is less suitable for those curious about why.

Shiran ShenShiran Shen is a fervent observer of U.S.-China relations. She graduated Phi Beta Kappa from Swarthmore College with a major in political science. You can follow her on Twitter @ShiranShen.