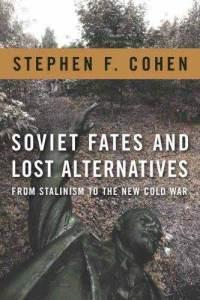 Stephen Cohen explores the conventional wisdom about Soviet and Russian history in his latest book.
By Rehanna Jones-Boutaleb | September 16, 2011

Why did the Soviet Union come to an end? Was the Soviet system reformable? Were there historical alternatives to Stalinism? These are the questions that Stephen F. Cohen raises in Soviet Fates and Lost Alternatives: From Stalinism to the New Cold War. In a series of seven essays, Cohen challenges conventional assumptions on the course of Soviet and post-Soviet history, examining the fates and lost opportunities of Stalin’s preeminent opponents.

For Cohen, captivated by the theme of political alternatives in history, Stalinism was never the predetermined outcome of the Bolshevik Revolution of 1917. Tracing the policies and aspirations of Nikolai Bukharin, Nikita Khrushchev, Yegor Ligachev, and Mikhail Gorbachev, he argues that there were both viable alternatives to Stalin’s Terror, and the eventual breakup of the Soviet Union. In other words, the Soviet system was reformable. Khrushchev’s anti-Stalinist reforms, for instance, represented a real alternative for the Soviet future of the 1960s. A “viable anti-Stalinist tradition,” Cohen argues, linked Bukharin’s progressive socialism of the 1920s and Khrushchev’s political revivalism of the 1960s.

In his first chapter, aptly entitled Bukharin’s Fate, Cohen cuts to the heart of the Bukharinist alternative to the horrors of Stalinism. In contrast to textbook explanations of Stalin’s rise to power, he explains that the Bukharinist opposition to Stalin’s economic and political strategies actually gained widespread support within the Communist Party. Advocating conciliatory economic policies to enable both private and state sectors to evolve into socialism, Bukharin was the historical representation of a road not taken in 1928. Linking the Soviet leader firmly to Lenin’s New Economic Policy of the 1920s, Cohen emphasizes that Bukharin’s visions for the state did not follow him to the grave: “During the Brezhnev years, economists continued to explore NEP’s contemporary possibilities.”

Cohen continues to unearth the fate of Stalin’s opponents in a somewhat incongruously placed essay on the lives of Gulag returnees during Khrushchev’s administration. By 1959, the surviving victims of Stalin’s repression had been released from colonies, camps, prisons, and exile. Collectively, Cohen argues, they played an important new role in Soviet life. Their shared needs and demands generated problems that required responses from the administration: “Virtually every returnee wanted, for example, a family reunion, medical care, an apartment, a job.” Although few survivors received any financial compensation for their years of hardship or confiscated saving accounts, they came to play a significant role in Soviet politics. Cohen emphasizes that some returnees even found themselves close to the center of power – notably veteran Communist officials Olga Shatunovskaya and Valemina Pikina, who came to sit on the Party’s supreme judiciary body. Both figures, Cohen highlights, opened Khrushchev’s eyes to the full horrors of Stalin’s Terror.

Fast-tracking to the 1980s, Soviet Fates and Lost Alternatives examines the career of Yegor Ligachev, the second-ranking politician under Gorbachev’s leadership. Rather than the neo-Stalinist “archvillain” of Soviet reform, as often portrayed in the West, Ligachev emerges in Cohen’s account as a conservative who believed that the Soviet Union could remain viable and undergo reform. Cohen stresses that without the backing of Ligachev and the regional Party bosses he represented, Gorbachev could never have attained power in March 1985.

Following from Ligachev’s vision for reform, Cohen attacks the idea that the Soviet Union was initially constructed along totalitarian lines and thus fundamentally incapable of change, unable to serve pluralist goals. He stresses that Gorbachev’s principal domestic reforms, between 1985 and 1990, were introduced, debated, and ratified in the highest Communist nomenklatura assemblies. He further rejects one of long-held axioms of Western scholars, the notion that the final years of the Soviet Union brought forth “an accelerating revolution from below.” Drawing upon public opinion surveys and referendums, Cohen emphasizes that large majorities of Soviet citizens, “ranging up to 80 percent,” remained opposed to free-market capitalism, and continued to support the main economic and social features of the Soviet system, including guaranteed employment, managed consumer prices, and a state-regulated market. The multinational Soviet state could have been reformed. By 1991, he concludes, the Soviet system was “in a process of far-reaching democratic and market reformation…under Gorbachev [the Soviet Union]…was in full transition.”

In the work’s most perceptive chapter, its epilogue, Cohen also raises the question of “who lost the post-Soviet peace,” i.e., what happened to the promised “strategic partnership and friendship” between Moscow and Washington, assured by leaders on both sides after 1991? He explains that the story line put forward by a majority of American political and media establishments was that friendly state relations, cultivated by former presidents Bill Clinton and Boris Yeltsin in the 1990s, were destroyed by the “antidemocratic” agenda of Vladimir Putin. Refuting these charges, Cohen argues that the opportunity for a constructive post cold-war partnership between both states was lost long before Putin took office: the Clinton administration effectively contributed to the dissolution of positive relations by promoting a false triumphalist vision of Cold War history.

When the Soviet Union ended in 1991, Cohen notes, Washington proclaimed a U.S. victory, adopting a fresh approach to Russian relations, one based on the premise that the Soviet Union had “lost” the Cold War. Despite the inaccuracy of this view – the Cold War ended almost three years before December 1991 – triumphalism took hold in Washington. Russia could now be regarded as a defeated nation, and the consequences were disastrous. U.S. attempts to “promote” democracy and effectively dictate Russia’s political and economic development attracted widespread critique within Russia.

For Cohen, it was Washington, not Moscow that squandered the opportunity for a genuine post-Cold War relationship. Although this argument has attracted widespread critique from both historians and politicians alike, Soviet Fates and Lost Alternatives finds its stride in Cohen’s ability to challenge conventional wisdom on the causes and consequences of major turning points in Soviet and post-Soviet history.

Rehanna Jones-Boutaleb is a contributor to Foreign Policy In Focus.