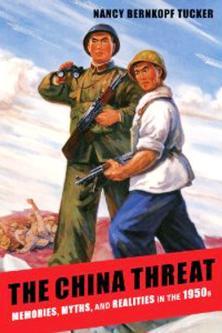 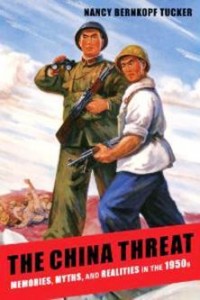 In her new book The China Threat, which features a colorful poster of the People’s Liberation Army on the cover, the distinguished American diplomatic historian Nancy Bernkopf Tucker combed manuscript collections, searched through oral histories, conducted interviews in both Beijing and Washington, and reviewed numerous other published documents to present the memories, myths, and the realities of the 1950s and 1960s. This was a peak period of the “China threat” in the United States, a time of the book-turned-movie The Manchurian Candidate, which straddled the Eisenhower and Kennedy administrations and created a certain paranoia in the U.S. public.

The core myth in this book is a story widely accepted by countless historians and policymakers: that Eisenhower kept his successor from doing the right thing and altering America’s China policy. According to Clark Clifford, Kennedy’s lawyer, “If Kennedy recognized Communist China, as some liberal Democrats urged, Eisenhower said he would attack the decision and try to rally public opinion against it. Kennedy did not comment, but I had no doubt that Eisenhower’s warning had its desired effect.”

Nancy Tucker, however, is not convinced by this story. She analyzes the contradictions between Eisenhower and his advisors’ public and private positions. A firm anti-Communist and more importantly a pragmatic politician, Eisenhower confessed to the National Security Council that “our trouble was that our domestic political situation compelled us to adopt an absolutely rigid policy” on trade and all other things Chinese. During the coldest period of the Cold War, Eisenhower made a slow transition toward greater realism and flexibility even as he remained fearful of public opinion and political pressure. But China was largely an afterthought for both Eisenhower and the United States, and Eisenhower, in fact, did little to stop Kennedy from establishing a more flexible and open U.S. relationship with the Chinese.

Another myth is that John Foster Dulles and the National Security Council dictated China policy. The bold secretary of state under Eisenhower is “neither the detractor, nor the sole architect of American foreign policy,” writes Turner. Dulles, an Atlanticist like Ike, according to Tucker was ignorant of and indifferent to Chinese realities before taking the job. On the other hand, Eisenhower was confident and determined enough to be his own national security advisor, often having Foster “deliver the strident ideological defenses of policy that the times demanded, but rarely [relying] exclusively on [Foster’s] advice.” And more often than not, Eisenhower used the NSC as a vehicle to educate and confirm his views. He installed staunch anti-Communists in important positions, but it was largely for show.

The final myth that Tucker exposes concerns the reasons why Eisenhower failed to change China policy. In fact, Eisenhower was an Atlanticist all his life.

The most compelling issues on the president’s mind included Germany, the Soviet Union, and Cuba, not China. He cared minimally about countries outside Europe. To the extent that he paid attention to China, it was to reassure U.S. allies in Asia and to use China as part of a three-way game with the Soviet Union. He paid lip service to public opinion — which he considered “insistent and frightening but also uncertain, volatile and contradictory” — by acknowledging the “China threat.”

Eisenhower was neither passive nor disengaged in his China policy. Privately, he held the opinion that states could be Communist and yet not part of an international conspiracy. Meanwhile, abandoning Taiwan was never a choice. A two-China policy was the best solution that he and Dulles could come up with. They did think hard about allowing China to get a seat in the United Nations. However, for Eisenhower, it was still “not yet a time to rearrange the structure of the Cold War.” Tucker believes that “had Eisenhower been willing to act, he might have caught China at an approachable moment when it, too, longed for improved relations.”

Yunping ChenYunping Chen is a contributor to Foreign Policy in Focus.