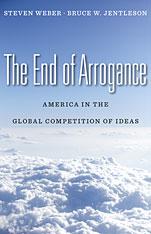 Review: The End of Arrogance

If Americans can no longer expect to wield unchallenged authority on the global stage, what comes next?
By Samer Araabi | November 15, 2010

The continuing failures in Afghanistan and Iraq have seriously eroded public perception of U.S. military dominance. The U.S. economy has been transformed from the “engine of economic growth” into the source of the global financial meltdown. American failures to address key global issues such as poverty, disease, and global warming have tarnished our image as protectors of the weak; our inability to protect our own citizens from unexpected disasters has become an international embarrassment. By all accounts, America’s unipolar moment has passed. A powerful new book by Steven Weber and Bruce W. Jentleson discuss that reality’s corollary: if Americans can no longer expect to wield unchallenged authority on the global stage, what comes next?

The End of Arrogance: America in the Global Competition of Ideas argues that with the rise of new powers advancing competing world views, the United States must learn to adapt. Five core American ideas that once dominated the global landscape – peace is better than war, hegemony is better than balance of power, capitalism is better than socialism, and western culture is better than the rest – are now hotly contested, and reopened for debate. Weber and Jentleson make a compelling argument for a tough reanalysis of the way we present ourselves to the rest of the world, and the ways other players challenge our American ideology. Though we retain a decisive military and economic advantage over other states, we are rapidly losing the war of ideas, as alternative models based on alternative ideologies have stepped up to compete.

In order to stay competitive – and relevant – America must come to terms with a “Copernican” reality in which it no longer occupies the center of its own universe, but instead recognizes competing bodies with their own gravitational pulls. Weber and Jentleson rightly contextualize this competition of ideas as a marketplace, rather than a war. In the contest of competing ideologies, leaders must satisfy the needs of their constituents, adapt to rapidly changing circumstances, and continue to evolve ahead of competitors. There are no permanent winners in a marketplace, and like many once-unchallenged corporations, America has failed to keep up with the times.

For the authors, the solution to America’s rising obselescence lies primarily in a doctrine of “mutuality,” the idea that our primary objectives should serve shared interests, not only selfish ones. In other words, it is no longer feasible to hold one standard for a domestic constituency and another for global populations. Each must be treated with the same respect, dignity, and autonomy.

Though Weber and Jentleson are often too happy to propose grand theoretical solutions without specific policy recommendations, their primary contribution lies in framing the questions, not directing the answers. Overall, the argument is a well-reasoned, well-researched wake-up call to Americans to fundamentally reassess our place in the world, and the means by which American might and influence can be used to promote solutions to globally recognized needs. Shedding American exceptionalism is the only way to remain relevant on a global stage. Otherwise, we may soon find ourselves on the receiving end of something arguably worse than international mistrust: global indifference.