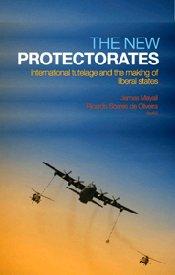 A new book explores the tensions between liberal state-building and outside manipulation.
By Melissa Moskowitz | April 12, 2012

The New Protectorates: International Tutelage and The Making of Liberal States, edited by James Mayall and Ricardo Soares de Oliveira, brings together a variety of authors to tackle the complexities of state-building and new protectorates in an era categorized by neoliberal economic policies, globalization, and the growing demand for democratic cooperation on both the national and transnational level. This collection of writers takes on the difficult task of exploring the vast complexities, nuances, ideologies and ideological contradictions of protectorates and liberal state-making in the 21st century. In 300 pages, the book’s essays cover transnational theories on development, critiques of UN peacekeeping, and analyses of the policy initiatives of rising states such as India and China.

Mayall and Oliveira begin by defining international tutelage and new protectorates as “territories where a medium- to long-term international presence” is “multilateral yet under de facto Western leadership…established with transformative goals at their core.” Such new protectorates include East Timor, Bosnia and Herzegovina, Iraq, Kosovo, Sierra Leone, and Afghanistan. Constantly in the forefront of the book is the subtle boundary between liberal state-building and the practices of imperialism. The authors usefully question the disconnect between western hegemonic practices like the manipulation of political economies and humanitarian intervention and the liberal ideologies of representation, sovereignty, and rule of law.

After debunking the myth that Japan and Germany have been iconic success stories of liberal state-building, The New Protectorates makes use of contemporary examples like Afghanistan to show how western states have failed to understand local culture, which has undermined efforts to create modern democratic states. At the heart of the critique lies a contradiction between liberal aims and liberal practices. Ultimately, hegemonic states have not accorded sufficient priority, attention, and legitimacy to new protectorate states, complicating the latter’s ability to self govern and leading in turn to a Western view that protectorates need liberal assistance to modernize and legitimate themselves as international actors.

The New Protectorates does not indict Western practices as demonic or imperialist but simply shows how practices with decent intent fail because of the inconsistencies between practice and ideology. In that respect, the book’s offering of useful proposals to reform or challenge state building provide useful adaptations to national and institutional state-building practices that take into consideration the histories and cultures of the new protectorates. The authors offer examples from the UN Peacebuilding Commission, aid programs, and international policing efforts to show that neoliberal programs designed to remedy problems within protectorate states are ineffective because they ignore the subtle variation and requirements of countries. The idea is not to do away with multilateral assistance and tutelage altogether, but to think more critically about when it is appropriate to assist countries and compromise their sovereignty in the process.