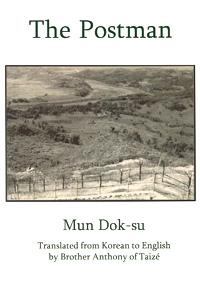 In Mun Dok-su's epic poem, a postman travels through the history of war to deliver an important message to humanity.
By Alicia Gregory | June 20, 2011

Van Gogh. Robots. Buddhism and the Bible. In Mun Dok-su’s long poem, The Postman, these elements, and a variety more, weave together to form a searching narrative­ that addresses some of the largest questions of humanity. What is at the root of war, terror, and destruction? How does one hold on to one’s humanity in the face of modern warfare and technology? As a postman delivers news to the door, Mun Dok-su delivers answers to his reader. At 82 years old, the poet has given the world his landmark work—an epic poem that exudes fire and fearlessness.

Driving the poem through a textured patchwork of history, modern culture, and metaphor is the steady figure of the postman. Specifically, as we learn in the first section of the poem, the postman is Joseph Roulin—a friend to Vincent Van Gogh and the subject of a number of his paintings. This identity is significant: kind, devoted Roulin was said to have been the only man who stood beside Van Gogh after he famously cut off his own ear after a fight with Gauguin. Projecting the goodness of Roulin on his postman, Mun breathes life into the figure that strengthens human relationships by acting as a loyal connector.

The reader follows the postman through six sections of the poem as he traverses generations and wars. Mun references everything from a bloody Korean coup in 1455 to the Greek myth of the Judgment of Paris to September 11th to famous words from the Psalms and Tibetan mantras. He imagines a wasteland future of wars fought by robots. As the postman navigates ravaged landscapes, Mun’s language is unapologetic, biting:

The skulls of grandfathers, sons, grandsons killed in battle
cover the highlands like the tumuli of royal tombs, roll to and fro like balls,
hit the tawny satchel hanging from one shoulder, bounce away,
end up hanging from the scorched stump of a tree.

Here the postman’s own body comes in contact with the skulls of the deceased as they hit his satchel, a pouch that traditionally carries letters and news. For the postman, however, the satchel can also be viewed as a womb carrying life and love. It also carries the answers to the difficult question of how to hold onto humanity in the face of so much destruction and so many ills: we must communicate compassion to one another. Here Mun echoes the Buddhist Metta view of loving-kindness, and love providing strength and healing. This is the simple remedy.

PC, TV, fridge, air-con, robot skull
gleam, marked by God’s hands.
Now everywhere you extract the jagged stones emerging from road-surfaces
and scatter flower-seeds
between hospitals, cemeteries, old folk’s homes, groves, rocks,
you conceal a television set like a lottery ticket, erect an antenna.
Lend me your mobile, I have to talk to God.
This is how everyone wants to love.

In the last section of The Postman, Mun begins to reference this love in its various capacities: love between strangers, between animals, between lovers, and between man and God, as transcribed above. Here Mun nods toward our technology-centered world full of TVs, computers, and mobile phones. His underlying message encourages us to turn back to our authentic selves, cultivate what is within, carry our love.

We, too, can be the postman.