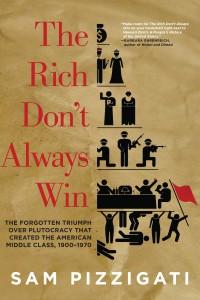 Americans were once able to wrestle, bit by bit, power and influence from the wealthy elite--and if they did it once, they can certainly do so again.
By Leslie Garvey | February 21, 2013

While the Occupy Wall Street movement may have become dormant during the recent winter months, its founding idea to fight and end income inequality has not become any less relevant. U.S. unemployment is still hovering around 8 percent, millionaires still manage to pay less in taxes than the average middle-class American, and the United States still ranks worse in income inequality than most Western democracies of its scale, placing it just below Iran, Uganda, and Nigeria.

Sam Pizzigati’s new book, The Rich Don’t Always Win: The Forgotten Triumph over Plutocracy that Created the American Middle Class 1900-1970, could therefore not come at a better time to rejuvenate the issue of income disparity and what to do about it. Employing a staggering compilation of primary sources, this exceptionally well-researched book reveals the previously unknown story of Americans who fought to overthrow plutocracy in the early 20th century.

Pizzigati, a veteran labor journalist and associate fellow at the Institute for Policy Studies, proves that what these progressive Americans accomplished—namely the advent of unions, workers’ rights, and a 91-percent top federal tax rate on income exceeding $100,000 for over a decade—worked remarkably well for the U.S. economy and greatly improved the general welfare of the American people, contrary to the conservative mantra that harkens exactly the opposite.

The Pitfalls of Plutocracy

Pizzigati begins by setting the stage in the early 1900s—a time before income, estate, or gift taxes existed, before employment benefits and unions were an employee’s right, before the government attempted to regulate the economy: a true capitalist’s dream. From the 1900s up until the Great Depression, he notes, the rich ruled unchecked, with the wealthiest 2 percent of Americans owning as much as 60 percent of the nation’s wealth in 1910. The poorest 65 percent of that time held only 5 percent.

As Pizzigati continually proves throughout the book, such a system simply cannot sustain itself. He reprints a passage from Chester Bowles’ 1946 book, Tomorrow Without Fear, to illustrate the fundamental flaw in an unchecked plutocratic system:

Let us suppose that 1 percent of the population were to receive 95 percent of our entire national income, with the remaining 5 percent spread among the rest of us…Could our system—could any system—work on that basis? One percent of the people couldn’t possibly consume 95 percent of all the goods and services which the rest of us could produce… [The 1 percent] would have no reason to use their savings to build more and more plants and facilities to produce more and more goods which they couldn’t consume, either.

Though the rich of this period “spent and spent,” Pizzigati notes, they “could not spend enough, could not personally consume enough, to keep America’s economic engine humming.”

This contributed greatly to the arrival of the Great Depression. Even though business was booming in the roaring 1920s and modern appliances such as electric refrigerators, radios, and cars were just entering the American market, most working-class Americans could not afford the new luxuries they were producing even as late as 1929. While overall productivity and profits rose during this period by a significant margin, wages did not. Little of this new wealth reached the average American, and much of it was used by Wall Street bankers and corporate giants to prop up the Wall Street “house of cards”—a speculative bubble whose bursting marked not only the worst period of economic crisis for all Americans, but also the failure of plutocracy as a viable system as well.

Yet the spectacular failure of plutocracy paved the way for progressive Americans to fight the system that so utterly failed them. Following the Great Depression, President Franklin D. Roosevelt’s New Deal best marked this progressive shift for average Americans—a Gallup poll conducted in 1941 showed that Americans, by over a two-to-one margin, felt that “there is too much power in the hands of a few rich men and large corporations in the United States.” Bit by bit, this progressive majority would manage to influence federal politics. By 1944, the rich would be paying four times more of their income in taxes than the rich paid at any point during World War I.

And while these gains against the entrenched wealthy elite were slow and hard-wrought over the years, as Pizzigati painstakingly documents, by the 1950s and 1960s, “No serious students of American history ever dared imagine a plutocratic restoration,” having lived during this prosperous “middle-class golden age” where plutocracy seemed to be the dated relic of a more backwards age. Progressives had eventually triumphed, and they thought there would be no going back.

Pizzigati’s work thus serves as a brilliant rebuttal to the right-wing notion that an unregulated capitalist system allows wealth to trickle down, create jobs, raise wages, and bridge the income gap.

What instead happened, as the 1920s revealed, was that the rich continued to get richer while the poor merely became more overworked and underpaid. The rich had no incentive to cut their profits by increasing wages, allowing paid vacation days, or reducing hours for their workers—in fact, many of them spent large amounts of time and money lobbying for exactly the opposite, time and time again. It was not until the progressive movement stepped up to the plate and instated limitations on this concentrated wealth that the middle class was eventually able to expand and prosper.

So although Pizzigati provides a thorough, chronological tour through decades of our economic history, his book is not merely a historical account. Where his work truly shines is in its call to action for every disillusioned, unsatisfied American living under the thumb of plutocracy today. Pizzigati’s remarkable research converges on the basic idea that Americans were once able to wrestle, bit by bit, power and influence from the wealthy elite—and if they did it once, they can certainly do so again.