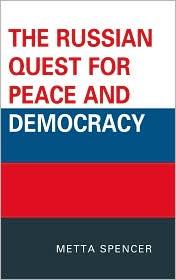 Review: The Russian Quest for Peace and Democracy

Canadian sociologist Metta Spencer’s career in Soviet-Western peace activism takes book form in her account of decades of democratic struggle in Russia, The Russian Quest for Peace and Democracy. Drawing on a broad spectrum of activist and reformist perspectives from both sides of the Iron Curtain, Spencer dispels three false beliefs in her colorful, informative account of how the Cold War really ended.

The three false beliefs are: Ronald Reagan won the Cold War by spending the Soviet Union into the ground, “only a country’s own population can influence its policies,” and ”no country should try to promote democracy in another state.” In the place of these myths, Spencer presents the two categories of Russian characters who brought down the Soviet Union: the “termites” and the “barking dogs.”

The termites, which quietly ate away at the system from within, eventually formed the core of the Gorbachev regime (including the general secretary himself, according to some). Meanwhile, open dissidents like Andrei Sakharov, a leading force behind the Partial Test Ban Treaty of 1963, made up the ranks of the barking dogs. Although they fundamentally opposed the termites’ top-down approach to reform, the barking dogs’ contributions were likewise important to the movement against totalitarianism.

In Spencer’s account, both termites and barking dogs relied on the support and assistance of international peace and democracy advocates, mainly from the United States, Canada, and Western Europe. Through their persistent prodding, and thanks to new connections between Soviet functionaries and various civil society groups from the West, more and more Russian Party members began working clandestinely on reforming the system from within. International conferences, cultural missions, religious associations and even “freelance diplomats” like the charismatic Americans Norman Cousins and Jeremy Stone forced both sides of the Cold War to come together, empathize and make concessions.

Spencer’s valuable account of this period in Eastern European socio-political history gives voice to those whose multifarious works ended the Cold War. She quotes at length from her extensive interviews – covering some 28 years of work in the field – shedding light not only on the accomplishments of individuals, but also on their characters.

The main weakness of the book is its somewhat tenuous theoretical framework. For one, Spencer draws extensively on the sociological work of Robert Putnam to put forth a theory of civil society and social capital. She variously defines social capital as “capacity-building” and “trusting relationships” to describe how groups in civil society – outside government purview – build ultimately progressive movements. Although the distinction between “bonding” relationships between like-minded group members and the more effective “bridging” relationships between diverse mentalities does contribute to her argument on foreign groups’ contributions to advancements in Russian civil society, the understanding of social capital presented in the book treats the concept as though it is almost always positive. Indeed, the only mention of potentially negative social capital comes in a brief discussion of the mafia networks that brought about numerous black markets in Russia due to the tight government controls of economic life under Communism.

Spencer’s account doesn’t end with Gorbachev’s ouster in 1991 by the neoliberal regime of Boris Yeltsin that eventually spiraled into a corrupt “mafiocracy.” In an interview with Grigory Yavlinsky, a former government official who worked on Yeltsin’s “shock therapy” economic liberalization scheme, the reader catches a glimpse of the bankrupting of Russia by a decade-long joint effort of East and West. Yavlinsky calls the rapid liberalization agenda “a policy based on incompetent vision… It was an intention to bring Russia as far from the former Soviet Union as possible,” to the point where the Russian economy could not compete with the United States in the new unipolar global order. A team of IMF bankers, Harvard economists, and Russian oligarchs worked together to scrap state-run industries, concentrate the newly created private wealth of the country into a few corrupt hands, and profit tremendously on the currency crisis they had created. The resulting social inequality posed fundamental challenges to Russian democracy that have yet to be adequately addressed.

Thus it was not some innate Russian cultural preference for autocratic rule that stifled the democratization set into motion with perestroika, but a number of complex political and economic maneuvers conducted by a community of power brokers whose interests run counter to the Russian quest for peace and democracy. Metta Spencer provides those interested in learning about and perhaps even contributing to that quest an engaging introduction told by the actors themselves.

Her website provides links to transcripts of all her extensive interviews conducted over decades of research, as well as her many articles on the themes explored in the book.