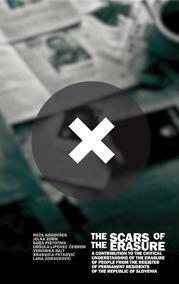 Review: The Scars of the Erasure

Why did Slovenia turn 25,000 residents into illegal immigrants overnight?
By Rehanna Jones-Boutaleb | August 22, 2011

On June 25, 1991, Slovenia achieved its independence. As the new state took form, citizens of the former Socialist Republic of Slovenia gained immediate citizenship, retaining their economic and social rights in a fresh homeland. But all citizens of other republics of the former Yugoslavia, with permanent addresses in Slovenia, were granted only six months to file for citizenship. If they failed to act within this timeframe, their permanent resident status was revoked immediately. This arbitrary act of abjuration resulted in the “erasure” of 25,671 people from the registry of permanent residents in Slovenia.

Those “erased” were not only deprived of their right to live in the Republic of Slovenia, but of their economic, social, and political rights as permanent residents. Legally, they were indistinguishable from migrants who had crossed state borders illegally. As residents began to understand their new circumstances, and grasp the widespread nature of the erasure, unsettling questions rose to the fore: How could this have happened? Who was responsible? Would there be any recourse to justice?

The Peace Institute’s 2010 publication, The Scars of the Erasure: A Contribution to the Critical Understanding of the Erasure of People from the Register of Permanent Residents of the Republic of Slovenia, has tackled these questions with diligence and compassion. Comprised of seven scholarly articles, intertwined by six eyewitness accounts, the work reveals the intricacies of the erasure, and examines how its implementation deprived thousands of their basic human rights. By delving into broader national issues, such as the decomposition of social welfare and the marginalization of emancipatory politics in Slovenia, the text reveals both the direct and indirect effects of the erasure. Significantly, the work brings a torrent of social science expertise to bear upon the issue. Each author investigates the erasure in light of divergent contexts, including the construction of Slovenian national identity and the establishment of common European migration policies.

Jelka Zorn’s chapter, for instance, places the erasure firmly in the context of Slovenia’s transition from a planned to a market economy. Erased residents, she emphasizes, were workers caught in a period of post-socialist economic transition. As the state’s welfare structure shrank, they were the first to be left outside the system. Crucially, Zorn also presents the erasure as a phenomenon that kept its victims isolated. As one interviewee discloses, municipal offices often propagated the illusion that few were affected by the erasure, that each case was an aberration. Early attempts at regaining permanent residence were thus individual endeavors.

In a successive chapter, NeÅ¾a Kogovšek elaborates upon this lack of state disclosure, arguing that the treatment of Slovenia’s erased residents constituted a mass violation of human rights. Progressing from the right to a free trial through to the right to housing, Kogovšek meticulously illustrates the personal and legal implications of the erasure. While her introduction to this publication establishes that the Aliens Act, which the government used to implement the erasure, was eventually decreed unconstitutional, this chapter clarifies that the scars of the erasure still run deep. Using data from the Ministry of the Interior, Kogovšek writes that, as of January 24, 2009, 10,943 erased persons have settled their status, with 7,313 obtaining citizenship, leaving a grand total of 13,426 people who remain erased. Cutting to the heart of one of the most serious violations of the erasure, the right to health care, Uršula Lipovec ÄŒebron’s piece examines the survival strategies of the erased, emphasizing their resourcefulness in coping with the sudden loss of health insurance.

In stark contrast, Brankica PetkoviÄ‡’s following chapter demonstrates how discourses of the erasure were immediately marred by stereotypes designed to reinforce exclusion and single out divisive ethnic differences. PetkoviÄ‡ analyses the erasure from the perspective of the Slovenia’s “new” unrecognized minorities, focusing on the use of linguistics as a tool of othering. Erased persons who continued to practice the languages of other nations of the former Yugoslavia were ridiculed; native languages suddenly became emblems of shame. Concluding on a positive note, Lana ZdravkoviÄ‡’s chapter draws upon the work of political theorists, such as Hannah Arendt, to examine the transformation of erased residents from victims to activists.

Although these seven scholarly essays offer readers a comprehensive analysis of the erasure and its ramifications, the greatest strength of this volume lies with the voices of the erased, with the six interspersed chapters presenting their life stories. These narratives encapsulate the suffering of the erased and starkly chronicle how the erasure annihilated dreams and livelihoods: “I was left literally without anything, without documents, without a job, without a family and without an apartment. I slept in basements, old cars and parks.” Although the translations from Slovenian often render the writing in these chapters long-winded and imprecise, it is nonetheless clear that the erasure left broken lives in its wake.

The Scars of the Erasure not only draws needed attention to the widespread impact of the erasure, but skillfully analyzes the ways in which those erased sought justice. Blending scholarly analysis and first-hand accounts, this publication offers a valuable insight into the means by which the erasure deprived residents of their legal status and rights. It allows the voices of the erased to be heard, loud and clear.