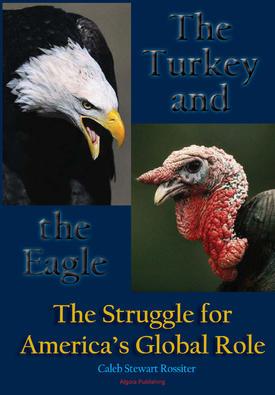 Review: The Turkey and the Eagle

A new book by Caleb Rossiter explores the roots of the U.S. tendency toward intervention overseas.
By Peter Certo | November 17, 2010 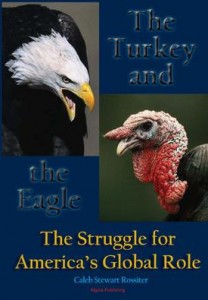 In The Turkey and the Eagle: The Struggle for America’s Global Role, Caleb Rossiter takes as his central metaphor an argument in early American history over what bird the nascent United States ought to take as its symbol. Eschewing the lazy, thieving eagle, Benjamin Franklin wryly advocated the turkey, that “vain & silly” bird “untainted by symbolic association with European expansion, and indeed, with expansion of any kind.”

Franklin lost that argument. The eagle has become the national symbol and also a fitting choice to represent the broad sweep of American foreign policy. As a foreign policy paradigm, Rossiter’s “Eagles” come in two varieties. Hard Eagles are the unapologetic American expansionists who advocate and sustain a program of voracious military spending and unilateral foreign adventurism. Hard Eagles are happy to expound on the virtues of democracy, but often do so “while arming and financing repressive but cooperative regimes” around the world. According to Rossiter, Hard Eagles constitute the bulk of the modern Republican Party, though such an orientation also characterizes a solid minority of Democrats.

Soft Eagles, who enjoy a tenuous hold on the Democratic Party, share the Hard Eagles’ goals of economic and military dominance. But they decry the damage to America’s international standing caused by ill advised, unilateral military adventures, as well as “dramatic international eyesores” such as the prisoner abuse scandals at Abu Ghraib and Guantanamo Bay. Although they are amenable to multilateralism, Soft Eagles can be nonetheless persuaded to back unilateral action if the goals they share with Hard Eagles are sufficiently threatened. Fundamentally, Soft Eagles differ from Hard Eagles in tactics – not goals.

Underpinning the Eagles’ willingness to act on their goals of military and economic supremacy is a cultural belief shared by the vast majority of Americans: exceptionalism. This exceptionalism permits the self-congratulatory perception of a benevolent U.S. state that shapes the world for the better. Moreover, exceptionalist policies that advance American self-interest are legitimate because what’s good for America is good for the world. “The logic of exceptionalism,” writes Rossiter, “dovetails with the requirements of domination.” America’s cultural acceptance of this logic largely confines anti-imperialists to the political hinterlands.

Rossiter’s “Turkeys,” however, categorically reject the logic of exceptionalism, and in so doing invalidate American claims to “determine a [foreign] government’s makeup and policies by threat, subversion, military and covert alliance, or force.” While not necessarily isolationist, and indeed ideally inclined toward cooperative international behavior, Turkeys reject the role of the United States as “world enforcer.” A minority of Democrats may subscribe to the Turkeys’ beliefs, but Turkeys’ often Democratic voting habits may only reflect the lack of a viable alternative. Though they frequently find it convenient to critique the effects of U.S. foreign policy, they depart from the Soft Eagles in that their criticism is ultimately a moral one. Determining the affairs of other countries, whether by force, suasion, or the propping up of often-oppressive regimes is ultimately the domain of empires. And for Rossiter, empire is irredeemably evil.

According to Rossiter, the fundamental failing of anti-imperialists, whether principled Turkeys or concerned Soft Eagles, has been a tactical propensity to attack not the principle of empire but the efficacy of its exercise. To prove it, he delves into his decades of experience on Capitol Hill as “an inside agitator, an anti-imperialist trapped in imperial Washington.” Rossiter presents a lucid insider history of numerous congressional attempts to scale back American interventions in El Salvador and Nicaragua. But “Soft Eagles in Congress,” Rossiter explains, “disputed neither [the] goal of blocking another Cuba nor [the] assumption that the United States had the right… to do so. Instead they fought [imperialism] on tactical grounds,” arguing that various interventions were not in the national interest. But having conceded the goal of restricting perceived Soviet influence in Latin America, their attempts were almost invariably derailed or set back. This massive concession of purpose inevitably prejudiced policy outcomes in favor of Hard Eagles, who not only espoused the goals but also pushed aggressively to attain them. Rossiter bolsters this thesis over and over again in his histories of other U.S. engagements in Vietnam, Angola, and elsewhere.

If such are the failings of Soft Eagles, Rossiter points to several “distractions” that have drawn the undue interest of Turkeys at the expense of more pressing anti-imperial projects. Among these are human rights, foreign aid, and most controversially, climate change. While he credits Turkeys with bringing human rights to the forefront of international consideration, he also laments that Eagles have managed to usurp the human rights project via so-called “humanitarian interventions,” where the veneer of human rights is used to justify self-interested or imperial invasions. He argues as well that foreign aid, even if is not embezzled by a dictatorial regime or funneled into brutal police forces, represents only a salve that does nothing to alter the fundamental power structures that enable poverty and oppression. Rossiter also acutely observes that climate change represents “a rare chance to find common cause with the American mainstream… to dismember the carbon-driven capitalism that many Turkeys see as the source of numerous political and social ills.” But unlike most other Turkeys, Rossiter is a climate change skeptic, if not an outright denier. He argues that this “perfect storm” hinders economic growth in vulnerable regions and that Turkeys should level their fire elsewhere.

So what should Turkeys do? Rossiter proposes that switching to a congressional proportional representation system, long advocated by political scientists like Arend Lijphart, could provide more space for anti-imperial parties. He even flirts with the idea of dissolving the Union. But most importantly, Turkeys must confront head-on the cultural assumptions of American exceptionalism. For this he proposes an aggressive, long-term media campaign attacking the moral right of Americans to dominate the world. If future Americans see their country as fundamentally similar to any other, they will reject the interventionist impulses of today’s Eagles.

The Turkey and the Eagle is a sweeping, detailed, and at times eccentric exposition on the imperative of changing America’s global role. Properly read, it can change the way we talk about empire and how we go about dismantling it. One needn’t share Rossiter’s climate change skepticism to join his civilizing mission. We can, he tells us, and we should walk back from empire not in weakness but in conscience. “In that case,” he concludes, “America could, finally, rightly claim to be exceptional.”

Peter CertoPeter Certo is an intern with Foreign Policy In Focus.