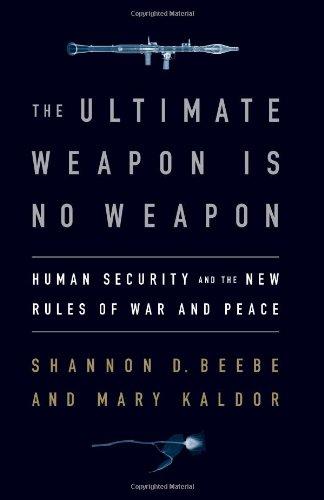 Review: ‘The Ultimate Weapon is No Weapon’

Can civilians and the military cooperate on building human security in conflict zones around the world?
By Aurora Ellis | August 30, 2010 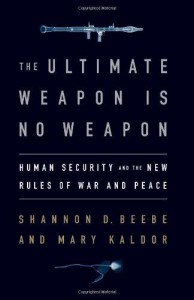 “Many will take offense to this book — on both the defense side and the humanitarian side,” write Mary Kaldor and Shannon D. Beebe in the concluding paragraphs of their latest book The Ultimate Weapon is No Weapon. Indeed, throughout their book Kaldor and Beebe try to find a common ground between what are often thought of as innate opposites: the military and civilian agencies. Their book is an attempt to provide a viable human security alternative to the conventional military responses to warfare.

Kaldor, a well-known professor and director at the London School of Economics and Political Science, and Beebe, a former senior Africa analyst for the Pentagon, argue that in order to protect the human security of the West, the conditions for human security must be secured more fairly across the globe. The two authors contend that globalization has propelled the world into a new era where wars are increasingly fought not between states, but between nongovernmental actors and states.

According to Kaldor and Beebe, the West needs a paradigm shift in how it views security when contending with global crises and terrorism. They argue that because poverty, limited political rights, or threats of physical violence drive insurgencies and violence, the United States and Europe should not emphasize “defeating enemies,” but rather prioritize the economic, political, and physical needs and rights of people, namely human security. Then and only then will the West achieve a truly sustainable security for itself and countries such as Afghanistan, Somalia, and Iraq.

The Ultimate Weapon Is No Weapon is a guide for Western policy-makers and activists on how to form what the authors call global civilian-military “engagement brigades,” which would specialize in enhancing physical security and political and economic development. These brigades would be deployed to conflict zones to implement a multilateral human security approach, as opposed to the conventional unilateral military response.

Kaldor and Beebe admit that the idea of global civilian-military “brigades” will provoke many questions from all sides of the political spectrum. They aren’t, however, calling for world police. Rather, they are arguing that the scale of humanitarian crises around the world require a powerful transnational entity that has both civilian and military capacities.

Although the book offers many important ideas for resolving insecurity, they don’t adequately address the processes and organizations that reinforce insecurity, like military contractors, multinational companies, and international financial institutions. Without an in-depth analysis of the global economic system that often perpetuates insecurity and conflict in developing countries, the holistic human security approach comes up short.

Kaldor’s and Beebe’s book is unquestionably a great contribution to the emerging literature on human security. Their book challenges readers to question conventional thinking on security and consider more just responses to modern conflicts. It’s a perfect place to start an inquiry into human security, but it certainly should not be the last.